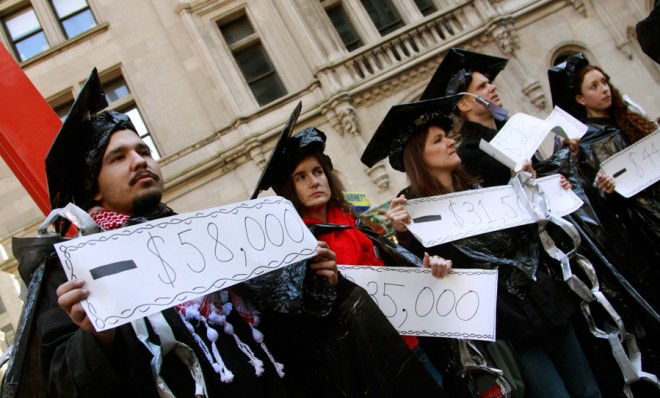 Graduates of 2012 left school with almost $30,000 in student debt, leaving young people to reconsider their options

The class of 2012 has the highest student loan burden of any graduating college class in history, continuing a five-year trend of rising debt loads on millennials just coming out of school.

It’s increasingly rare for students to get out of college without student loan debt. Of 1,075 private and public colleges, 42 reported that more than 90% of their graduating class are leaving college with some student debt – meaning the vast majority of their students had to take loans to graduate. Meanwhile, 122 colleges reported the average debt per student is more than $35,000. Overall, currently only three out of every 10 US graduates are graduating without debt.

An equal proportion of white and black respondents – 46% and 45%, respectively – said that they or someone in their household has student loan debt, according to a Harvard University Institute of Politics survey of 18-29-year-olds. The number was slightly smaller for Hispanic households, at 32%.

Money is an important factor when it comes to attending college, especially for those who have little. The majority of the IOP survey respondents, at 70%, said that financial circumstances played a role in their decision whether or not to attend school at all. The difference between race was even more stark in the breakdown of these responses, with 52% of blacks saying that it played an important role compared to 38% of whites.

Millennials: from student loans to unemployment

Debt at graduation increased an average of 6% each year from 2008 to 2012, so it’s hardly a new trend. Still, there’s evidence that millennials are slowly beginning to question whether attending pricey colleges is worth it; some say they regret not weighing their options more carefully. A recent Wells Fargo survey revealed that 31% of millennials regret paying for college instead of getting a job and carving out a spot in the job market.

While college education does often result in long-term higher income, current average wage for young college graduates (21-24) is $16.60. That translates into an annual income of roughly $34,500 for a full-time year of work, reports the Economic Policy Institute. That’s the lowest average pay since 1998.

Unemployment numbers don’t always paint the most accurate picture of the situation. Reality is much bleaker than the figures first suggest. For instance, there are about 1.7 million “missing workers” within the 18-29-year-old demographic. These are the people who’ve given up looking for work.

The decrease in the unemployment rate for young graduates can be attributed to the increasing number of those, who while not unemployed, are underemployed, working part-time, low-skill jobs for the minimum wage.

“Poverty-wage workers are also more likely to be young; while workers age 18–25 made up only 15.5% of the total workforce in 2011, they constituted 35.5% of poverty-wage workers,” states an EPI report on low-wage workers. The underemployment rate for college graduates iscurrently 18.3%, as compared to 9.9% in 2007. Furthermore, millennials won’t reach median wage until they are 30, unlike their parents, who on average made it around their 26th birthdays.

Given all these daunting statistics, it should come as no surprise thatonly about one in 10 millennials define their job as a career. Rather than focusing on career building and advancement, most millennials are currently focused on making ends meet and finding a job that throws them a paycheck on Friday. They are, on average, facing about $30,000 in college loans that have to be paid off.

What comes next: a White House Summit

With many young graduates taking low-skilled jobs at minimum wage, the conventional wisdom on the value of education has been challenged.President Barack Obama’s remarked recently that:

If you get some kind of higher education – whether it’s a two-year degree, a four-year degree, a technical college – you’re more likely to have a job. You’re more likely to see your income going up. More than ever before, some form of higher education is the surest path into the middle class, and the surest path that you stay there.

Millennials and employers, however, seem to need convincing that college matters. Obama, who has previously spoken on the importance of making student loans affordable, will be meeting college presidents next Wednesday on 11 December during a White House summit. The goal: to make college accessible for low-income and disadvantaged students.