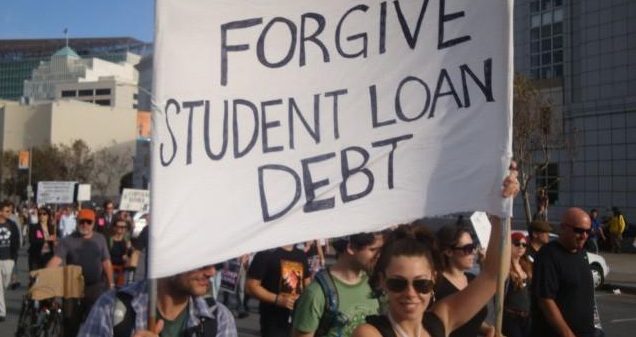 Something amazing happened recently. The NJ Society of Certified Public Accountants addressed the issue of student loan debt and in a variety of formats:

One observation, mentioned by Mr. Kaszerman’s guest on this podcast, Don Meyer, Chief Marketing Officer of the NJ Society, was astonishing:

“Regardless of the generation, research shows most of these borrowers don’t ever intend to pay this off.  They intend to take it to their grave, which is a horrible thought. From the age of 22, they expect to die before they can pay it off.”

I think Mr. Meyer’s word “intend” was an unfortunate choice.  A better term to describe the struggle of debtors to repay would be “realistically impossible.”

In fact, if Americans were aware of the extent that student loan debt has been carved out to serve the pockets of the educational and financial industries as well as the government, they’d think twice before considering higher education.

Beginning in the 1970s and over the next 4 decades, in bi-partisan administrations, student loan debt has been stripped of most consumer protections including, but not limited to, Truth in Lending, Statute of Limitations (federal), Fair Debt Collection practices, and bankruptcy (debtors can file and have their debt extinguished in bankruptcy only under the most dire of circumstances).

Recently this fact was laid out when a top official of the Department of Education (DOE), A Wayne Johnson, quit in order to push an agenda to cancel much of the country’s student debt.  In reference to his two years at the DOE, Mr. Johnson said “[You’re] not going to fix something broken at its core.”

One of the issues which makes this debt so difficult to repay is the questionable practices of the loan servicers who administer and process loan proceeds and payments.  The servicers are approved and assigned by the DOE. Borrowers have no choice of loan servicer, who profit nicely.

Loan servicers have been known to lie, deceive, misapply loan payments, force forbearance on debtors (a grace period for repayment in which interest continues to accrue, increasing principal balance), tell borrowers they are delinquent when they are not, hold online payments for days before applying to the loans, limit the date and number of times borrowers can make online payments, and apply payments to loans where interest rates favor the profitability of the loan servicer.  Additionally, loan servicers have been known to have very cozy relationships with educational institutions.

In 2007, then NY Attorney General Andrew Cuomo instituted an investigation of the cliquey relationships between loan servicers and colleges.  His research resulted in Congressional testimony which revealed an “unholy alliance” of deceptive practices, which were widespread between colleges and lenders.  These practices included revenue-sharing agreements (kickbacks), interest, fees, stock incentives, and other perks.

Sallie Mae, one of the largest student loan servicers has been investigated by both the Consumer Financial Protection Bureau (CFPB) and the US Government.  In 2015, Sallie Mae settled with the US government for deceiving almost 78,000 veterans by charging interest on their student loans in excess of the rate capped by the Military Lending Act.

SLM Corporation, the holding company for Sallie Mae, is a publicly traded entity which dates to the 1970s. It was originally a government entity.  In 2014, after decades of negative publicity (if you googled “Sallie Mae sucks” there’d be hundreds of thousands of responses), Sallie Mae ‘rebranded’ as Navient.

In 2017, the CFPB sued Navient, for failing borrowers “at every stage of repayment,” including employing practices that failed to correctly apply for payments, obscured loan information, used widespread deception, and harmed disabled borrowers including severely injured veterans.

In February 2018, my article “This is US. Student Debt Devours Young and Old” detailed the difficulties of repayment for a woman whose 1987 original $10,000 in federal student loan debt turned into a repayment scheme of 30 plus years.

I first became interested in this industry in the late 1990s while repaying my own loans.  Early in the repayment process – despite paying on time or ahead of schedule – I would receive notices from my loan servicer that the loans were late or delinquent. This would pave the way for the servicer to assess monthly late fees and denial of interest rate deductions (carrot and stick rewards for several on-time payments).

Once the servicer notifies a borrower of pending delinquency, the loan guarantor (these were FFEL loans which contained a 100% federal guarantee to the holder – a program which was a cash cow for investors and was terminated under President Obama) would take steps to aggressively begin collection.  I fought vehemently against these fraudulent and deceptive practices, writing letters and documenting the abuse. Despite paying on these loans for the past 25 years – with an original $35,000 balance – I still owe $4,000.

My own experience helped me focus on other debtors, and for the past decade, as a CPA, I’ve worked with borrowers, young and old, reviewing their loan documents, payments, and noting a common thread.  The struggle to repay this debt is very real and truly frightening. It is a cauldron of trickery.

Here’s a sample of some of my clients:

The above examples are the reality.  Below is Tom’s story. The numbers are most revealing.

Tom graduated in 2017 from a large nonprofit university in a major US city (annual filing documents show this university has $1.5 Billion in surplus and annual profits – tax-free – are over a quarter of a billion) with debt totaling $131K ($83K private, and $48K federal). After paying his loans for the past 18 months, Tom was recently notified by the university that he also had a third type of student loan, a Perkins loan, for which payments were past due.  Perkins loans are low-interest federal loans for students with exceptional financial need. The Perkins loan originated in 2016, amounted to another $3,000 in debt.

Despite on-time payments for the past 18 months, and the contract variable interest rate changing monthly and ranging between 6% to 9%, the effective interest rate paid (because of added fees and capitalized interest) was 21%.

Exhibit A (read it here: exhibit-a) shows the payment of Tom’s loans for the 18-month period.  After paying almost $20,000, with average monthly payment over $1,000, the principal amount paid on the four loans was a paltry $1,400.  All payments on Loan #1 went to interest and fees.

So, despite the contract which was presented to Tom by the private loan company (in association with the university) stating the initial interest rate was (on average) 6.52%, the effective (actual) rate of interest paid for the first 18 months was more than triple that rate.  The interest rate paid on Loan #1 was 100%; all payments went to interest and fees.

If the loan servicers – those responsible for assisting borrowers in the repayment of their loans – are fraught with fraud and abuse, how can one honestly repay their debt?

Most can’t. The Pew Charitable Trust recently reported a quarter of borrowers defaulted within 5 years of repayment.  Default occurs on federal loans after 270 days without repayment. A default can result in wage garnishment (including Social Security and disability income,) seizure of tax refunds, damaged credit, and constant harassment from collection entities.

Additionally, since student loan debt is unique in that it is exempt from most consumer protections, private loan servicers have little to fear from borrowers’ inability to repay.  Upon delinquency and default, they can go after assets and wages with little to no recourse for the borrower. Also, since most private student loans require co-signers (who step into the shoes of the borrower,) the ability to collect has increased incredibly.

But for borrowers?  Not so much.

Although there are repayment programs purported to help borrowers manage their federal loans, most contain nonsensical requirements or draconian repayment sentences which only work to increase the loan balances.

Take, for example, the Public Service Student Loan Forgiveness Program, which (in theory) allowed borrowers to make 120 monthly payments on their federal Direct loans, and after 10 years, the balance would be forgiven (tax-free.)  Recently, Forbes reported that 99% of applicants who completed this program were denied forgiveness (usually because of some obscure parameter, like making payment to the wrong loan servicer or in the wrong amount or on the wrong date or any number of dozens of requirements).  This left borrowers, who thought they would be free of these loans, forced to continue repayment of principal balances which were increased because of lower monthly payments.

Here’s another example. Howard, the attorney mentioned earlier.  His education included federal debt as an undergraduate ($25K) and another $220K for law school.  Deferring his loans while in law school, and subsequent periods of an economic downturn after graduation, his loans ballooned to $280K.  Although now working full time and earning a good salary, his payments, at $3,247 per month, were totally unaffordable. In order to avoid default, Howard entered the federal Income Based Repayment program.  He is currently in year 3 of a 25-year repayment plan with monthly payments of $300.  But those payments don’t touch the principal, which means any shortfall in monthly interest liability results in increasing the principal by that amount.

Daily interest on Howard’s loans total $70, monthly interest would be $2,100 ($70 times 30 days).  By paying $300 per month, $1,800 ($2,100 less $300) of monthly interest is not being paid, so at the end of the year, the total unpaid interest is added back to the principal.  In Howard’s case, it amounts to over $21K. That is just for the current year. Each year Howard must recertify his eligibility to be in the program. Failure to annually recertify can mean termination.  Additionally, the following year, when Howard begins repayment in year 4, he is doing so with increased principal balances by $21K (and thus increased daily interest to meet).

The Income-Based Repayment program is a circuitous scheme intended to keep borrowers out of default (and thus the US from explaining rocketing default rates) without reducing principal balances.

Since 2008 the US has had a Lost Decade in higher education funding at the state level.  In 2017, the loss topped $9 Billion below the 2008 level. This lack of funding provides the cover for colleges to increase tuition – and thus student borrowing.

Nine billion reduction over a decade in education but according to the current Department of Defense budget, the US will spend the same amount increasing the Navy’s budget bringing it to $205.6 Billion. That is for the current year. The Air Force gets an $11.8 billion increase to $205 Billion.  The Army gets a $12 billion bump to $192 Billion.

In fact, according to a recent report from Brown University, the cost of the global War on Terror topped $6.4 Trillion (4 times the amount of current student loan debt) and cost 801,000 lives.

With no end in sight.

Below is a snippet of some of the priorities in the DOD budget for the upcoming 2020 fiscal year. It’s important to note the DOD Budget states it has moved away from fighting terrorism as its primary concern, instead of focusing on building “a more lethal, agile, and innovative joint force.” (DOD Overview FY 2020 Defense Budget page 1-3):

That’s a subtotal of $88.5 Billion for upcoming fiscal year

The total DOD Budget request is $718 Billion, an increase from 2019 of $33 Billion, which, including funding the above, also supports 900 military bases in 182 countries on 7 continents and 7 bodies of water. According to the National Priorities Project, US military spending outpaces the next 7 largest military budgets in the world.

Clearly, in the US, preparation for war is a priority.  Education? Not so much.

What other country devours its youth?

Within the past 2 decades, student loan debt skyrocketed past $1.6 Trillion entrapping 44 million borrowers, young and old, in suffocating payments, reeking with fraudulent loan servicers, leaving most borrowers thinking they will die before they can pay it off.