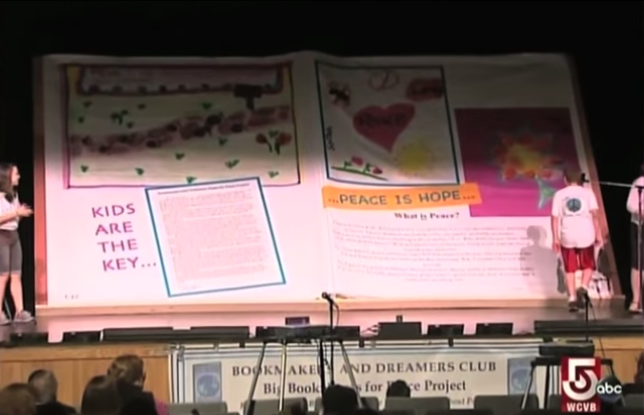 Students And Teacher Are ‘Inspiration To The World’

Ban Ki-moon, Secretary General of The United Nations, told Betsy Sawyer, her students and assembled guests at the JFK Presidential Library that their afterschool “peace club is an inspiration to the world.”

The occasion was the launch of world tour of the Big Book: Pages for Peace Project. A decade in the making, the book started when middle school students solicited and received original messages of peace from the likes of the Dali Llama, Maya Anelgou, Nelson Mandela, President Jimmy Carter, the late Senator Ted Kennedy and thousands of others from all over the world. It is these letters, poems, and artwork that populate the Big Book: Pages for Peace.

“It has taken you ten years to create this extraordinary book,” Ban Ki-moon said in his video address, “at twelve feet high and (twenty feet wide, when open) it truly lives up to its name. You have 3,500 messages of peace from all over the world, and now with mine you have 3,501. What an amazing achievement, and what a fantastic commitment.”

Ban Ki-moon is not the only champion of the project with ties to the United Nations. Ambassador Anwarul Chowdhury, former president of the U.N. Security Council has been a champion of the project for many years and was on hand to deliver the keynote address. Speaking to Acronym TV, Chowdhury said, “I am so delighted to be here. Now it is my intention to help them get this exhibit to the United Nations. The people of the U.N. should see how young kids have dedicated themselves over 10 years to build this book.”

Betsy Sawyer, a teacher at Groton-Dunstable Middle School in Groton, Massachusetts and the advisor to the club, was celebrated and honored at the gala event for being a champion of the original vision, articulated by young children seeking a more peaceful world ten years ago. “Some of you had doubts,” Sawyer said “but I had the kids. And they inspired me every day – in so many ways with their energy, and intelligence, thoughtfulness, and their dignity.”

Ted Reinstein has covered the evolving story of the Peace Book “at least a half dozen times” on the news show “Chronicle,” a nightly newsmagazine which airs on Boston’s ABC affiliate. Reinstein, who served as emcee for the evening, admits that he was skeptical the first few times he covered the story about the chances that such an ambitious project could ever be completed. “This is cute. This is fun. This is nice. This will never happen,” Reinstein remembers thinking. He credits the “relentless, indomitable spirit of Betsy Sawyer” for the completion of the project.

Siarra Coston, a 7th grade student and current club member, expressed a wish to “show the book to kids around the world, especially those who don’t see peace in their life.” Jesse Trainor, 15, who (full disclosure: Jesse is my daughter) spent 4 years in the club before moving on to high school this fall said that her experience with the Peace Book project “shaped how I view the world and how I approach problems.”

A major supporter of the club who has watched many of the original members grow up is John Feal. Feal, a 9/11 first responder who has dedicated his life to assisting and advocating for 9/11 first responders who have devoloped illness as a result of exposure to toxic chemicals at ground-zero, said simply that the kids involved in the club had made him a better person.

Feal has made multiple trips from New York to Groton, often traveling with first responder to work with and support the students in the Pages for Peace project. He described those trips as therapy for his fellow first responders. Praising Sawyer, Feal said “(Betsy) took these kids who have blossomed, not only into special kids, but into people that are going to make a difference in the world. (Betsy) – not the book- is responsible for that.”

Lewis Randa, founder of The Peace Abby, was also a keynote speaker at the event and implored guest to “let the Big Book be a beacon of light; a blueprint for living our lives; a symbol for love, for sanity, for healing, for being human
“When you join an afterschool club, you don’t expect it to change the world,” 5th grader Kate Suchecki told me, “but this one might actually do it.”