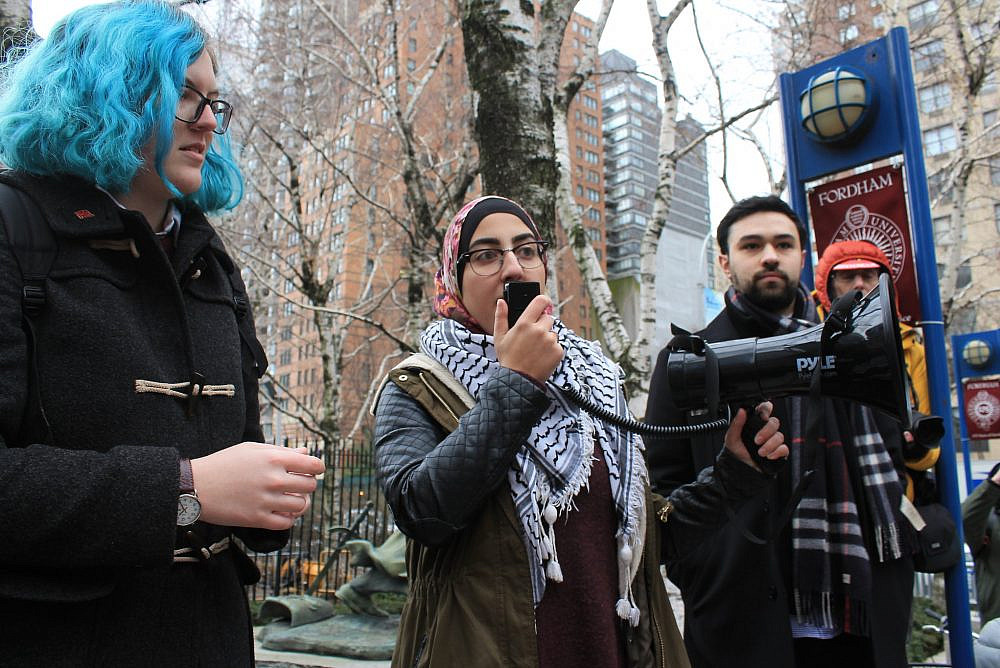 Students At Fordham University Fight For Their Right To Support Palestine

Above photo: Members and supporters of Fordham Students for Justice in Palestine protest the university administration’s refusal to register SJP as a student organization, in New York. Jan. 23, 2017. Joe Catron/Flickr.

This university claims to be pro-justice. So why is it banning Palestine activism?

After a four-year legal battle, Fordham University is still refusing to allow a Palestinian rights club on campus. But students are not letting up.

Veer Shetty wants what hundreds of other college students have: a school club that speaks out for Palestine on campus.

Shetty grew up in Ann Arbor, Michigan, with a close Palestinian friend who told him horror stories about the Israeli occupation. So when he started school at New York’s Fordham University, he was determined to get active in the struggle for Palestinian rights.

For the past year and a half, the college senior has had the chance to do so. As vice-president of Fordham’s Students for Justice in Palestine club, Shetty has helped to organize various Palestine-related cultural and political events for his fellow students. “Having a budget and being a sanctioned club, we did what we wanted to do: showing movies and having awesome speakers come in and further the discourse on the Israel-Palestine issue on campus,” Shetty told +972.

But now, Shetty’s student organization is not even allowed to exist.

For the second time in five years, Fordham University, a school that proclaims its commitment to the “promotion of justice” and “freedom of inquiry,” has banned its SJP chapter from campus. Following a New York appeals court ruling in December, which granted the school the right to ban the organization, school administrators informed Fordham SJP members in early February that they could no longer be an official school club.

Asked by +972 why Fordham banned SJP, Bob Howe, a spokesman for the university, pointed to the New York court’s ruling that “rejected SJP’s appeal to overturn the University’s decision not to recognize an on-campus chapter of the organization.”

Fordham’s decision is the most extreme manifestation of what Palestine Legal, an organization dedicated to protecting the civil liberties of Palestine activists, calls the “Palestine exception to free speech” in the United States.

Fordham’s students are hardly alone in facing obstacles to pursuing Palestinian rights activism. Israel advocacy groups have poured hundreds of millions of dollars over the years into making organizing for Palestine on campus difficult, pressuring university administrations to place bureaucratic obstacles against Palestinian rights groups and launching smear campaigns against them.

In 2019, lawyers at the NGO Palestine Legal responded to over 180 incidents of attempted speech suppression targeting students and scholars working for Palestinian rights.

And at Fordham’s Manhattan campus, the effort to target speech on Palestine has reached its logical conclusion in a decision to ban students from organizing at all.

In the fall of 2015, a group of Fordham students decided to form a chapter of SJP, a student group that operates on dozens of campuses in Canada and the United States. SJP chapters typically bring in Palestinian speakers, spread awareness about Palestinian culture, and in some cases advocate for their school to divest funds from companies that do business associated with Israel’s military occupation of the West Bank and Gaza Strip.

Some SJP chapters have engaged in more confrontational tactics. In May 2016, SJP members at the University of California, Irvine protested a screening of a film sympathetic to the Israeli army during an event that also included a talk by Israeli soldiers. Prevented from entering the film screening, the SJP members demanded to be let in while chanting outside the screening, which some event attendees complained disrupted their ability to watch the movie.

Attendees also complained that the activists had barred people from entering and exiting the room where they were protesting, though the SJP activists denied that claim. UC Irvine asked the local district attorney if the student protesters had violated the law, but the district attorney ultimately declined to file charges.

In another case, in April 2018, Palestinian rights activists at New York University disrupted an outdoor rave held to commemorate Israeli independence, with one activist burning an Israeli flag.

Because of their outspoken advocacy for Palestinian rights, SJP has long been a target of Israel advocacy groups, who see the group as posing a threat to the traditional American consensus that Israel should be supported.

Websites like Canary Mission and SJP Uncovered harass student activists by compiling what amount to public blacklists, publishing the names, photos, and social media posts of students involved in the organization, and abeling them “antisemitic” and supporters of “terrorism.” Other groups, like the Zachor Legal Institute, have tried to link SJP to Hamas and to get the Department of Justice to investigate the student clubs, though without success.

The cacophony of Israel advocacy and school administrators’ hostility toward SJP at times has led to crackdowns on the organization’s chapters. In 2014, Northeastern University suspended its SJP chapter after members distributed mock eviction flyers to students, to dramatize what it’s like for Palestinians to be evicted from their homes. The same year, Loyola University also suspended its SJP chapter after the group protested the promotion of Birthright trips to Israel on campus; Loyola’s chapter was reinstated shortly after being suspended.

It was those types of protest that the Fordham administration claimed it was concerned about, and subsequently spent a year evaluating its students’ application to form an SJP club. The student organizers, however, insisted that their chapter would be autonomous and separate from other SJP chapters.

Glenn Hendler, a professor of English and American Studies who was the proposed faculty adviser for Fordham’s SJP, engaged in several conversations with Keith Eldredge, Fordham’s Dean of Student Life at the time, about whether the club should be approved.

At the same time, however, Eldredge was also speaking to other faculty members and Fordham’s Jewish Student Organization, who argued that SJP was divisive. Those arguments won out in the end.

“I cannot support an organization whose sole purpose is advocating political goals of a specific group, and against a specific country, when these goals clearly conflict with and run contrary to the mission and values of the University,” Eldredge told the would-be SJP members in an email explaining his decision.

Outraged by Eldredge’s decision, the Fordham students took their university to court.

‘Getting away with censorship’

In April 2017, attorneys with Palestine Legal and the Center for Constitutional Rights (CCR) filed a lawsuit in New York state court on behalf of the Fordham SJP students, charging the university with violating its own policies, which include a commitment to open and diverse opinions on campus. Because Fordham is a private university, the case does not center around violations of the First Amendment’s guarantee to free speech; it is instead focused on alleged violations of Fordham’s own regulations, which New York State oversees.

“They want to suppress our ability to express what we feel,” said Ahmad Awad, a Palestinian-American plaintiff in the lawsuit who graduated in 2017. “Fordham’s decision, unfortunately, opens the door for other universities and other institutions to dehumanize and target organizations simply on the [basis of] ideology. It was the same way in the 1960s or 1950s, that so many organizations tried to step in front of the civil rights movement.”

In their legal filings, Fordham’s lawyers argued that the administration had complied with its own policies, and that in any case, New York law does not permit courts to intervene in educational decisions made by a university.

In August 2019, New York Justice Nancy Bannon ruled that the courts did in fact have jurisdiction in the case, and that Fordham had not followed its own rules. The judge wrote that Dean Eldredge’s decision was “arbitrary and capricious” because he had no basis or or authority to reject a club just because it focused on one country.

The ruling allowed Fordham students to organize under the SJP banner and enjoy the usual benefits — access to funding and space — that other school-sanctioned clubs receive.

Fordham University, however, appealed the decision, and in December 2020, the appeals court overturned Bannon’s ruling, allowing Fordham to reinstitute its ban on SJP. The appellate judges ruled that the administration’s reasoning — that SJP might bring disruption to Fordham’s campus — had basis in fact.

“There’s a reason why Israel lobby groups cheered this decision, and that’s because they want to stop this vibrant, growing movement for Palestinian rights,” said Radhika Sainath, a senior staff attorney at Palestine Legal.

“It’s a worrying sign when courts let private colleges in New York get away with censorship that’s contrary to their stated free speech policies,” Sainath continued, but noted that, for now, “this is one decision, in one court, and does not establish a precedent that would authorize any college in any other state to prevent students from forming an SJP.”

‘I want to fight for the next generation’

In January, CCR and Palestine Legal asked the New York State Court of Appeals to take another look at the case and overturn Fordham’s ban on SJP.

“This is an opportunity to hold schools accountable to their promise for respecting diverse points of view,” said Alan Levine, cooperating counsel on the lawsuit.  “Fordham, like any other college, says, ‘we’re a place where all points of view are accepted.’ Its mission statement guarantees students the right to express themselves.”

For now, the lawyers and students are waiting for that judge to deliver their decision, though it is unclear when or what the decision will be.

The students behind the lawsuit — even those, like Awad, who have already graduated — say they won’t back down from their demand that Fordham allow them to organize for Palestinian rights on campus.

“Because my rights were jeopardized, I want to make sure there’s no one else at Fordham that experiences the same detriment to their college education and experience,” said Awad. “I want to fight for the next generation, that next student. Because if I don’t stand for these issues, who is going to?”