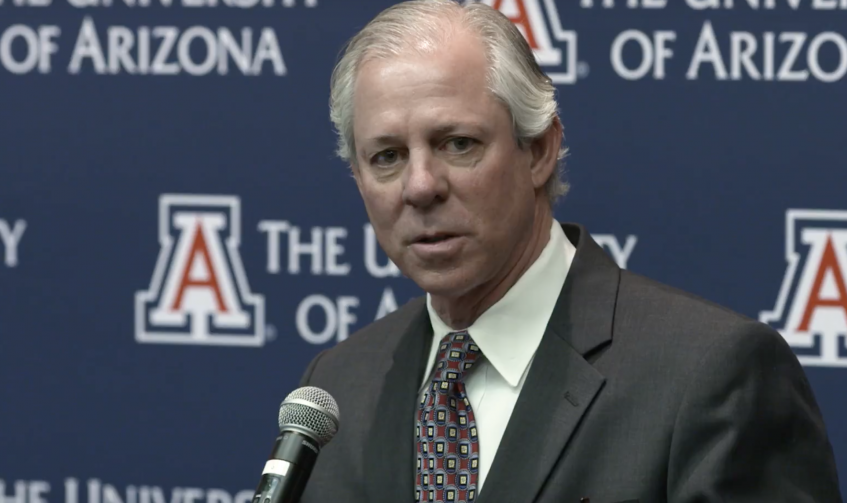 Above photo: Robert C. Robbins, president of the U. of Arizona: “Student protest is protected by our support for free speech, but disruption is not.”

Two University of Arizona students who protested an on-campus presentation by the U.S. Customs and Border Protection agency last month by calling the agents “murder patrol” and “an extension of the KKK” have been charged with misdemeanors, university officials confirmed on Tuesday.

The case is being closely watched by free-speech advocates who say it is unusual for arrests to follow a nonviolent campus protest. They say tougher crackdowns on student protests can be expected in light of President Trump’s executive order threatening to withhold federal money from campuses that fail to protect free speech.

The two undergraduate students, Mariel Alexandra Bustamante, 22, and Denisse Moreno Melchor, 20, were charged with interfering with the peaceful conduct of an education institution, a misdemeanor. Melchor was also charged with issuing threats and intimidation, a campus spokesman said. Both were cited and released on Monday.

The protest began on March 19 while two Border Patrol agents were speaking about career opportunities in criminal-law enforcement. They had been invited by the Criminal Justice Association, a student club. Outside the partly open door of the room where they were speaking, at least one protester recorded them, calling them “murderers” and other names.

“This is supposed to be a safe space on campus,” the female student said. “But they allow an extension of KKK on to campus.” A member of the student group invited her to come in, but she said she didn’t feel safe doing so.

Video of that protest went viral and was picked up by conservative news outlets that denounced the students’ actions as free-speech violations. Both students have received hate mail and threats since the videos were posted, the campus spokesman said.

A second clip shows the students following the agents outside to their car.

In a written statement on Friday, Robert C. Robbins, the university’s president, called the incident “a dramatic departure from our expectations of respectful behavior and support for free speech on this campus.”

In addition to filing charges against the two students, the university police will continue to investigate whether additional criminal violations occurred, Robbins said. The Dean of Students Office is reviewing potential violations of the student code of conduct, and the university is investigating whether any actions of university employees warrant discipline.

“At the core of these inquiries is the University of Arizona’s commitment to free speech,” Robbins wrote. “The student club and the CBP officers invited by the students should have been able to hold their meeting without disruption. Student protest is protected by our support for free speech, but disruption is not.”

As a community of scholars, he added, “we need to be more thoughtful and deliberative in how we approach these issues and work together to sustain vigorous conversations to find better solutions.”

In an earlier statement Robbins touted the university’s “green light” rating from the Foundation for Individual Rights in Education, the free-speech advocacy group. FIRE, in a statement issued Tuesday, called the incident “a close call between competing First Amendment interests.”

“Taken alone, the content of the speech at issue here — calling Border Patrol agents ‘murder patrol’ and ‘an extension of the KKK,’ for example — is plainly protected by the First Amendment,” the statement reads.

“Likewise, the call by a Border Patrol agent (with considerable political influence) to investigate and punish students for a letter criticizing the Border Patrol is a clear demand that the university violate the First Amendment.”

But FIRE’s statement goes on to say that the First Amendment protects the right of public-college students to hear from the speakers free from what’s called a heckler’s veto: “However … isolated heckling, fleeting disruption, or other expressive activity that does not prevent audience members from seeing and hearing the speaker is generally permissible.”

Jeffrey A. Sachs, a lecturer in politics at Acadia University who has written widely about free-speech issues, called the arrests an overreaction.

“That decision, as well as the accompanying comments by President Robbins, suggest a real shift or sense of anxiety about the new pressures being put to bear on universities to come down hard on protests that might be viewed as disruptive,” he said on Tuesday.

He said the crackdown was very likely influenced by President Trump’s executive order on free speech. Arizona is also one of dozens of states where lawmakers have enacted free-speech laws that threaten action against noncompliant colleges, he said.

“We’re very supportive of free speech,” Robbins said in an interview on Tuesday. “Students are allowed to protest, but not inside a building where classes are going on. When we have board meetings, students are outside protesting and chanting and beating drums, and we allow them to do that even though we can hear them,” he added. “We hear them, but it doesn’t disrupt the meeting.”

Protesters who complained that their free-speech rights had been violated should consider the rights of the students in the classroom who were there to hear the agents, the president said.

“Free speech doesn’t mean free speech only when you agree with it,” he said.

He said he empathized with Hispanic students who felt stressed seeing armed agents in uniform on the campus.

Robbins said he’s going to ask the university’s National institute for Civil Discourse, which was started in the wake of the shooting of a former congresswoman, Gabrielle Giffords, to organize a public seminar to give everyone a chance to engage in a thoughtful discussion about the tensions that are playing out. The event creates an important learning opportunity, he said, for a Hispanic-serving institution that is the closest to the Mexican border of any members of the Association of American Universities.

The Associated Students of the University of Arizona posted a letter on Facebook on March 21 saying students should have been warned in advance of the Border Protection agents’ appearance on campus, which was bound to cause stress to DACA and undocumented students, in particular, it said. The same day the agents appeared on campus, the letter said, a Tucson family was arrested and detained “mere miles” from the campus.

Correction (4/2/2019, 10:03 p.m.): This article originally stated that President Robbins had said border officers had also talked on campus out of uniform. The president was mistaken, and the article has been updated to reflect that.

Katherine Mangan writes about community colleges, completion efforts, and job training, as well as other topics in daily news. Follow her on Twitter @KatherineMangan, or email her at katherine.mangan@chronicle.com.