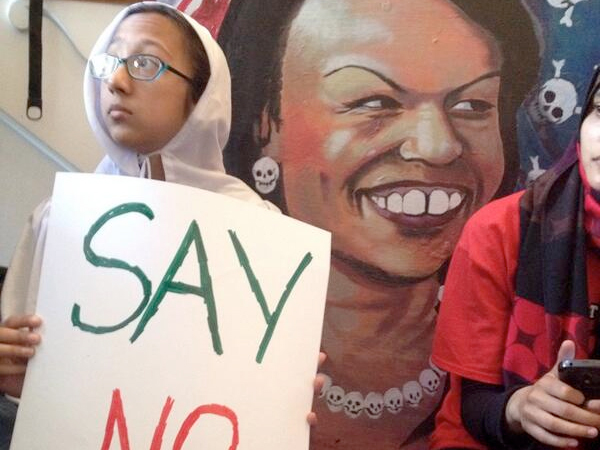 In a statement, Rice said she informed Rutgers President Robert Barchi that she has decided not to give the May 18 address.

“Commencement should be a time of joyous celebration for the graduates and their families. Rutgers’ invitation to me to speak has become a distraction for the university community at this very special time,” Rice said.

“I am honored to have served my country. I have defended America’s belief in free speech and the exchange of ideas. These values are essential to the health of our democracy. But that is not what is at issue here,” she said. “As a Professor for thirty years at Stanford University and as (its) former Provost and Chief academic officer, I understand and embrace the purpose of the commencement ceremony and I am simply unwilling to detract from it in any way.”

About two hours later, Rutgers officials released their own statement.

“While Rutgers University stands fully behind the invitation to Dr. Rice to be our commencement speaker and receive an honorary degree, we respect the decision she made and clearly articulated in her statement this morning,” Barchi said. “Now is the time to focus on our commencement, a day to celebrate the accomplishments and promising futures of our graduates. We look forward to joining them and their families on May 18, 2014.”

Barchi said more details about the commencement will be announced in the coming days. Rutgers has two weeks to come up with a new commencement speaker.

Earlier this week, about 50 Rutgers students staged a sit-in inside the campus administration building to protest the selection of Rice to speak. She was scheduled to receive $35,000 for her speech and an honorary Rutgers doctoral degree.

The students called for Rutgers to disinvite Rice, echoing the sentiments of several campus faculty organizations that said the former U.S. Secretary of State was an inappropriate choice because of her involvement in the Bush administration’s support of the Iraq War, waterboarding and other controversies.

Rutgers officials had declined to rescind their invitation to Rice, saying the university welcomes debate on controversial issues. Until today, Rice had remained silent about the growing protests.

Rutgers faculty members who opposed Rice’s selection were scheduled to hold a “teach-in” on the New Brunswick campus Tuesday to discuss the controversy with students and the public.

“Attending the teach-in will be a strong signal that we will not sit quietly while a small group of irresponsible people dishonor our beloved university,” said Rudolph Bell, a veteran history professor and one of the faculty members organizing the opposition, in a letter to the campus earlier this week.