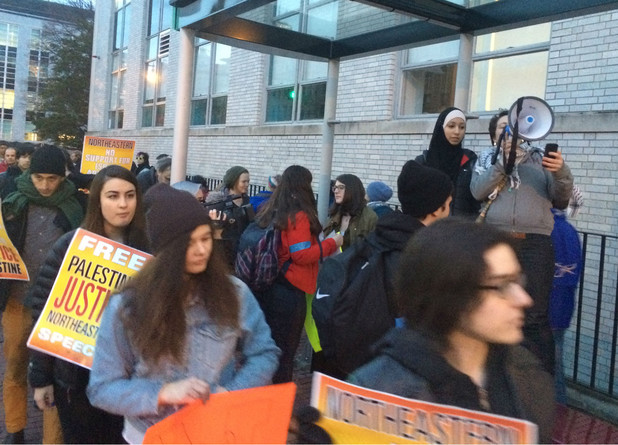 Students For Justice In Palestine Win Major Victory At Northeastern

Above: Students and community members protest the suspension of Northeastern SJP outside the university campus on 1 April. Source: Ali Abunimah

Northeastern lifts suspension of Students for Justice in Palestine

After seven weeks of sustained media attention and organizing by student activists,Northeastern University today announced that it has lifted the suspension of Northeastern Students for Justice in Palestine (SJP).

Not only will the group will be fully reinstated on 1 September, but they will have access to more funding for educational events than was available before the 7 March suspension. Northeastern SJP will be able to plan for those events immediately.

The group was suspended in an unprecedented sanction by the administration after students distributed mock eviction leaflets on campus, a popular direct action many Palestine solidarity groups undertake during the annual Israeli Apartheid Week to raise awareness about Israel’s destruction of Palestinian homes.

The administration also launched a police investigation against and threatened two of the students involved in the mock eviction action with charges that could have led to suspension or expulsion. The threat of expulsion was rescinded after an outpouring of condemnation by Northeastern SJP activists and supporters across the US.

Anti-Palestinian groups such as the Boston-based Americans for Peace and Tolerance and the Zionist Organization of America have been orchestrating campaigns against Northeastern SJP and its members for several years, demanding the university punish and suspend the group.

Individuals affiliated with such extreme right-wing Zionist organizations have issued death threats against student members of Northeastern SJP. The university has still not addressed or condemned the attacks by such groups against its students.

Tori Porell of Northeastern SJP told The Electronic Intifada that Robert Jose, Northeastern’s Dean of Residential, Cultural and Spiritual Life, approached SJP leadership earlier this month to help create a plan to reinstate the group that would be both acceptable to SJP and the university administration, but would “ultimately bring SJP’s voice back to campus.”

Northeastern SJP agreed to several conditions, including monthly meetings between the leadership of SJP and the dean and working with him directly to plan a series of educational events. The events are proposed to be centered around two themes: discussions of political movements that have inspired SJP’s actions and organizing, including the South African anti-apartheid struggle, and discussing the intersectional relationships between Northeastern SJP and other student groups on campus working within liberation struggles.

Under the terms of their reinstatement, Northeastern SJP will have access to funding and the ability to reserve spaces on campus before September so that the group will be fully operational and can hold events by the fall semester.

Northeastern SJP explained to the administration that the suspension has done irreparable harm to the group’s reputation on campus, according to Porell. They insisted that the administration issue a statement saying that SJP will be treated like any other legitimate student group on campus, and that it is in line with the university’s principles.

“We’re not asking for apology, but we asked for a statement that we’re a legitimate group and will be treated the same as any other group,” Porell added. They sent their conditions to the dean two weeks ago.

Northeastern SJP says that they attribute the reversal of the administration’s punitive actions against the group to the media attention and the uninterrupted pressure placed on the university since the suspension.

“Although historically our side has been the one that’s been marginalized and powerless against this sort of arbitrary punishment, the tide is turning and the university is now afraid of both [Zionist political groups] and SJP,” Porell remarked. “It’s starting to be more equivalent.”

Northeastern SJP and their legal advocates have indicated that if the group’s suspension was not lifted, a lawsuit would be filed against the university for violations of the students’ free speech rights.

Last week, the university confirmed it was ready to reinstate Northeastern SJP, but at the last moment the administration appeared to have reneged on certain agreements it had made with the students. However, in the last few days and in response to a recent letter sent by staff attorney Sarah Wunsch of the American Civil Liberties Union of Massachusetts, who was working on behalf of Northeastern SJP to address the group’s concerns, Northeastern seems to have backed off.

Both Wunsch’s and Northeastern’s letters are posted below.

In his letter, Northeastern’s Senior Vice President and General Counsel Ralph Martin confirmed that SJP will resume operation in the fall, although under a “probationary status.”

In a press release emailed to The Electronic Intifada, Porell says that “We are willing to live with being on probation for one semester, although that is objectionable and most likely also a way to appease those groups calling on the university to censor SJP.”

In the same press release, Wunsch states that “SJP’s reinstatement is a victory for freedom of expression which is a crucial aspect to any quality university … The university never had a legitimate basis for punishing SJP for allegedly violating rules that were not enforced against others. Northeastern was wrong to place SJP on probation last year and we will be watching very carefully to ensure that SJP is treated fairly and equally in the coming years.”

Radhika Sainath, staff attorney with Palestine Solidarity Legal Support and cooperating co-counsel with the Center for Constitutional Rights, adds: “What happened to SJP at Northeastern is just one part of the larger assault on speech supporting Palestinian rights in this country. There is no ‘Palestine Exception’ to free speech rights and the First Amendment.”

Probation or not, students say they will be immediately focused on building the group. “We’ve had so much more interest in SJP, with more people wanting to get involved since this all happened,” Porell told The Electronic Intifada. “This is a great time to educate others on campus about Palestine and grow SJP.”