Students Lead ‘March For Our Lives’ Against Gun Violence

High school students joined hands to lead over a half a million demonstrators in the “March For Our Lives” anti-gun protest on Saturday. They decried gun violence in their schools and criticized the National Rifle Association (NRA) response to mass shootings that have swept the country in recent years. They delivered a message to politicians funded by the gun lobby that they will “never again” let mass shootings happen because of easy access to guns. 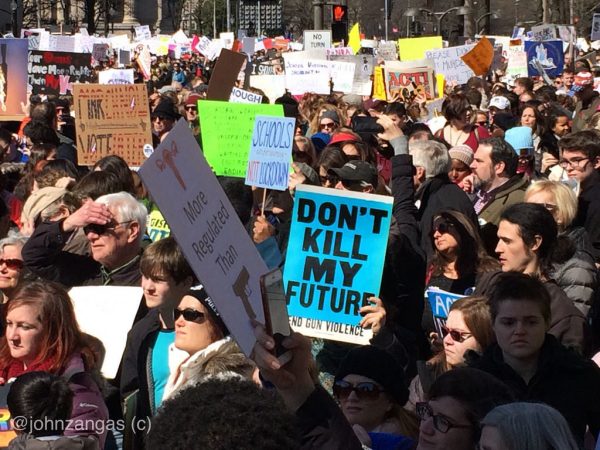 “We’re determined–nobody’s backing down,” said Victoria Gonzalez, whose boyfriend Joaquin Oliver was one of the 17 victims of the shooting at Marjory Stoneman Douglas (MSD) High School. “I think that’s what’s different. We’re not getting discouraged.”

A massive crowd packed Pennsylvania Ave., forming a sea of people in front of the stage erected for the noon rally. The youth-organized protest drew hundreds of thousands of protesters, and many advocacy groups lent their support, including Moms Demand Action for Gun Sense in America, Black Lives Matter, CODEPINK: Women For Peace, HipHop Coalition and many others. 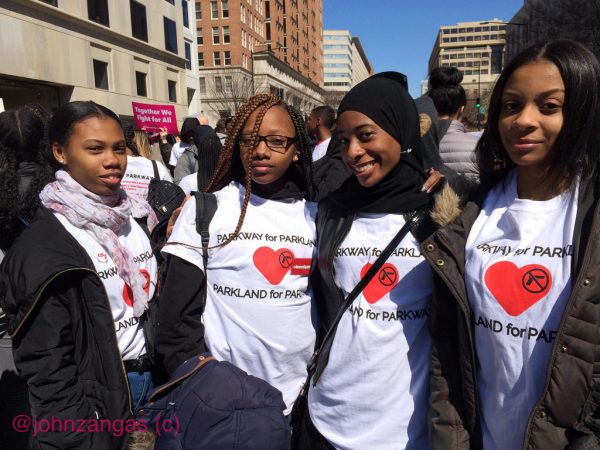 Students from MSD High School in Parkland, Fl. were front and center, along with victims of other previous school shootings. Emma Gonzalez–who gained prominence after the Parkland shooting for a searing “we call B.S.” speech–took the stage for exactly 6 minutes and 20 seconds, the amount of time the shooting lasted. She named the victims and mesmerized the crowd when, in tears, she let most of the 6 minutes elapse in silence.

Students wearing “Parkway for Parkland” t-shirts came from Parkway High School in north Philadelphia to show solidarity with the Florida students. The Parkway students say gun violence in their communities is epidemic–56% of students have witnessed shootings firsthand, according to a student poll. 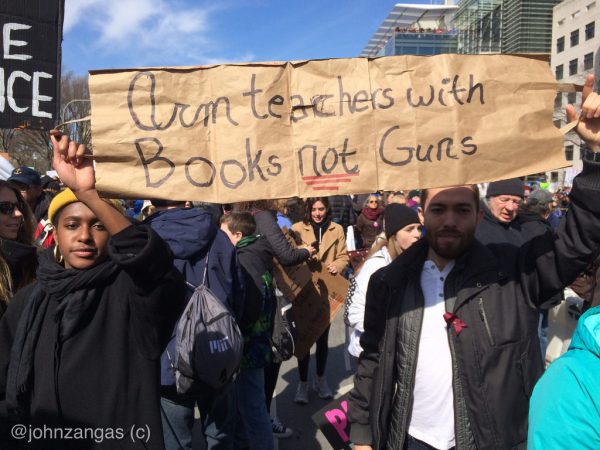 The vast numbers and intense feelings pervading the march may signal that an absolutist view of “gun rights”—that the Second Amendment is inviolable and should be allowed to trump students’ safety at school—will no longer be tolerated in the mainstream.

Among the March’s demands are a moratorium on AR-15 assault weapons, a ban on bump stocks and other devices which render guns into fully automatic weapons, mandatory background checks and an increase in the age of eligibility to purchase guns.

All young people were encouraged to register to vote as soon they are able to. Many students emphasized that they will soon be able to vote, and they delivered a stern warning to NRA supporters in Congress: they should be ready to pay a steep political price if they continue to obstruct gun control legislation.