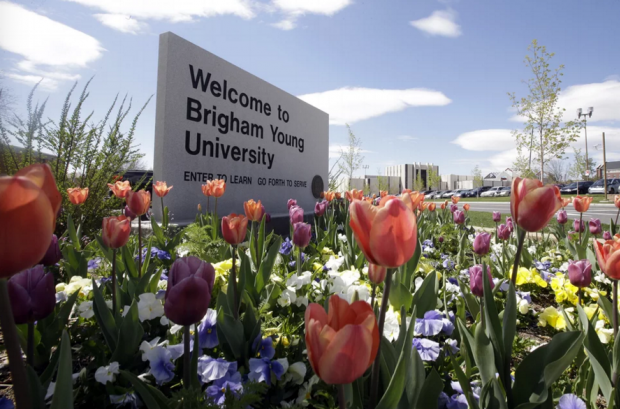 Students protest over case of sophomore Madi Barney, who publicly revealed she was raped and then punished for violating the mormon school’s bylaws

Students rallied outside Brigham Young University on Wednesday to protest the school’s treatment of sexual assault victims, calling for revisions to the Mormon university’s “honor code”, religious bylaws through which rape victims can be punished for having consumed alcohol or had a member of the opposite sex in a bedroom.

The protest follows outrage over the rape case of sophomore Madi Barney, 19, who reported to Provo, Utah, police that she was raped in her off-campus apartment during a date.

According to police documents viewed by the Salt Lake Tribune, Barney claims the perpetrator, 39-year-old Nasiru Seidu, lied about his age, name, and marital status, and that he raped her while she cried out and screamed ‘no’. The Tribune said the police confirmed those details during a staged phone call between Barney and Seidu after she filed the report.

A Utah County sheriff’s deputy, who was friends with the accused, then sent Barney’s police case file to BYU and, two months after her attack, she was summoned to the honor code office for a disciplinary hearing.

Barney went public with her case last week, and a petition she drafted demanding BYU grant victims of sexual assault immunity from honor code punishments has since garnered over 90,000 signatures.

Citing safety concerns, Barney’s supporters said she could not attend Wednesday’s protest, but they delivered the petition on her behalf to a representative of BYU president Kevin Worthen. They wore teal armbands, a symbol of solidarity with assault victims, and carried placards that read, “Protect victims, don’t shame them.”

A fellow rape survivor, Brooke Swallow, said, “Dissension is a Mormon value. We need dissension and dissidents in this culture so we can effect change.”

Under the counsel of her attorney, Barney declined to participate in the school hearing, claiming it would complicate her legal case. The university has since blocked her from registering for new classes, she told the Salt Lake Tribune. And when she tried to retroactively withdraw from two courses she struggled in due to frequent court appearances and other aspects of the investigation, Barney’s request was denied because, according to her account, administrators said they “can’t prove the rape occurred”. Barney did not respond to a message from the Guardian seeking comment.

She has filed an official complaint to US Department of Education, according to the Tribune, saying BYU denied her services that under federal law should be available to sexual assault victims in accordance with Title IX, the gender equity rule that requires schools to address reports of sexual assault and harassment. The university claimed to be meeting Title IX compliance standards when it began investigating Barney’s case.

In a Facebook post announcing Wednesday’s protest, Barney noted that by reporting sex crimes, victims like her expose themselves to potential probation, suspension or even expulsion. “Nothing a survivor does makes rape or any sexual assault OK,” she wrote. “By investigating victims for violations of the honor code, BYU is revictimizing those who come forward and blaming them for what happened.”

The Department of Education warned universities in a 2011 letter about the “chilling effect” that disciplinary policies may have “on victims’ or other students’ reporting of sexual violence offenses”.

“Schools should be aware that victims or third parties may be deterred from reporting incidents if alcohol, drugs, or other violations of school or campus rules were involved.”

In response to the uproar Barney’s case has inspired, Worthen issued a statementon Monday promising to “study” the relationship between its Title IX office and honor code office.

“Sometimes in the course of an investigation, facts come to light that a victim has engaged in prior Honor Code violations. The university recognizes the inherent tension, in some circumstances, in these two important parts of BYU’s efforts to create and maintain an atmosphere consistent with the ideals and principles of the Church,” the statement read. “In all Honor Code proceedings, the university strives for fairness, sensitivity and compassion, taking into account all mitigating facts and circumstances.”

The school’s announcement did not impress Kelsey Bourgeois, an organizer from the petition network Care2 and a former BYU student. She told the Guardian, “It seems more like they are trying to get this bad press to go away versus really committing to making a change.