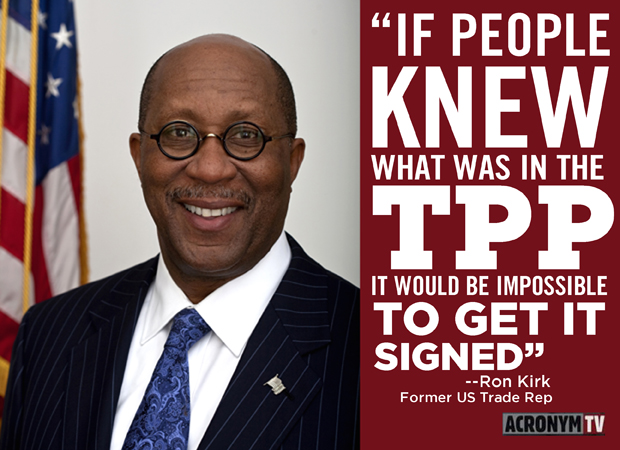 Students Rally To Topple The TPP

Click here to stop Fast Track of the TPP: http://www.stopfasttrack.com

Former US Trade Representative Ron Kirk said that if the people knew what was in the Trans-Pacific Partnership, it would be impossible to get it signed. The Obama administration is going to great lengths to make sure that people do not know what is in the TPP before it gets signed into law, and have made “fast tracking” the TPP bill a top priority.

January 22nd marks the beginning of a ten-day push by groups who work on a wide variety of issues to stop Congress from granting the President Fast Track for the Trans-Pacific Partnership (TPP). The push culminates in an Intercontinental Day of Action against the TPP onJan 31- with events and actions being planned all around the world.

The TPP has been called NAFTA on Steroids, and if you hate the concept of corporate personhood, consider that from leaked chapters of the TPP text we know that if the TPP passes, we will all be getting used to the phrase corporate nationhood.

Signatories to the TPP, which now include the US, most of the Pacific rim countries, in addition to Australia, Brunei, Chile, Malaysia, New Zealand, Peru, Singapore, Vietnam, Mexico, and Canada will agree that trade a binding tribunal made up of 3 corporate judges will settle dispute and supersede, for example, the US Constitution.

The TPP is the forerunner to the equally secret pact between the EU and the US known as Trans Atlantic Trade and Investment. However, BBC is reporting that the European commission is slamming on the brakes and has “launched a three-month public consultation on the proposed investment rules for firms, responding to fears that they could give big firms too much power to block unfavorable government policies.”

Joining me to discuss the growing movement to halt fast track and topple the TPP is Stuart Sidle.

Stuart is a senior at Reed College in Portland Oregon where he is engaged with environmental justice activities and serves on the national steering committee for the United Students for Fair Trade, a grassroots network of students and youth working in solidarity with cooperative communities and workers to promote fair trade principles and models.

Here is what you can do:

1. Call your members of Congress – go to StopFastTrack.org and use the simple tools there to contact your members.

3. Visit FlushtheTPP.org to join or create local actions. January 31 is an Intercontinental Day of Action.

Together, we can and will stop the TPP. It has already been delayed. But this month, the President is putting increased pressure on members of Congress to give him Fast Track. He may succeed if we don’t raise our voices too.