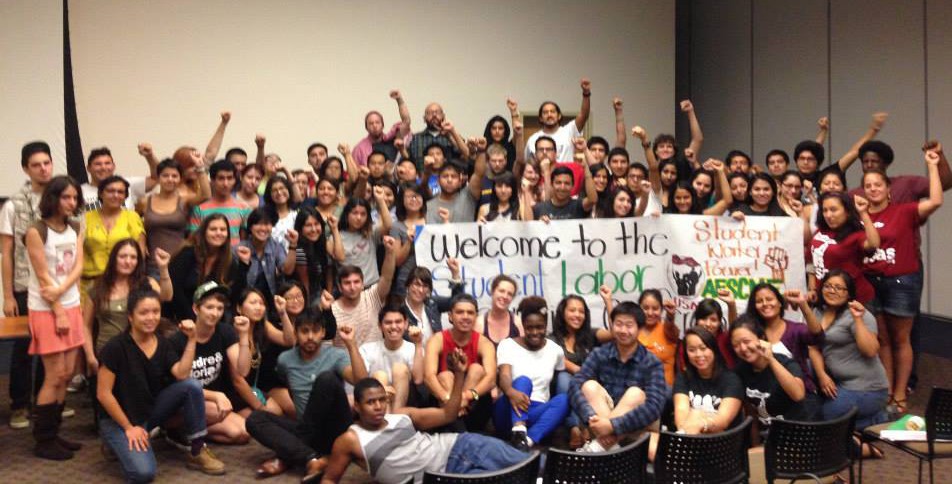 As University of California students gear up for a Hallo-Week of Action, they released the following open letter pledging to stand with campus workers with AFSCME 3299 who are taking a strike vote next week.

We write to you on behalf of students from across the University of California who share a deep concern about the UC’s decision to implement drastic cuts on 8,000 of our lowest paid campus workers, as well as more than 12,000 UC patient care workers.

We represent a wide variety of student organizations that benefit every day from the hard work of our custodians, gardeners, food service workers, facilities maintenance staff, patient care workers and teaching assistants. We know that this University would not exist without our campus workers, and are disappointed with the UC for unilaterally imposing cuts that hurt the lives and families of vital members of our community.

The recent cuts amount to a 1.5% decrease in take home pay for workers making an average of $35,000 per year, and up to $124,000 in higher health costs for each worker in their lifetime. Even before these latest cuts, 99% of Service Workers were income eligible for some form of public assistance. By contrast, UC’s highest paid employees — nearly 700 of whom receive larger salaries than the President of the United States — have already received a 3% across the board raise this year.

The UC system prides itself on accountability, diversity, quality of education and affordability. We are proud to call ourselves UC students, but are calling on the University to live up to its own core values. As tuition skyrockets and students rack up a mountain of debt, our campus workers are being pushed further into poverty. Without students there would be no UC system and without the workers the UC system would be unable to operate. We believe it is time for the UC to shift its priorities, and to start putting students and workers first.

We are calling on all students and student organizations to join us in this fight to support our campus workers in AFSCME 3299 and UAW 2865. AFSCME’s democratically elected leadership has called for a strike, and if our workers step out on to the picket lines, we pledge to stand beside them. We will stand with our campus unions because the fight for worker rights and student rights are one in the same, and together we can win. We pledge to reach out to our fellow students to support our campus workers until they receive the fair contract that they deserve.

United Students Against Sweatshops (USAS) is the nation’s largest youth-led, student labor campaign organization, with affiliated locals on over 150 campuses. USAS affiliates run both local and nationally-coordinated campaigns for economic justice in partnership with worker and community organizations. Since 1997, USAS has won precedent-setting campaigns, educated students about the growing dominance of corporations in the globalized economy, as well as the intersectionality of identity and social justice issues with the labor movement, and has trained tens of thousands of young activists to become skilled organizers, researchers, and campaigners in labor and social justice organizations.