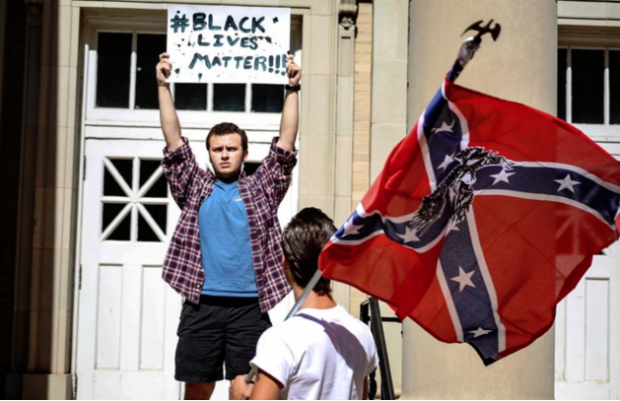 Above Photo: Deja Samuel. An Ole Miss student responds to a KKK counter-rally on campus with a “Black Lives Matter” sign.

Student leaders at the University of Mississippi voted on Tuesday night to remove the Mississippi state flag, which contains the Confederate battle emblem, from campus. Once the resolution is signed, it will be up to school administrators to act on it.

The university in Oxford, Mississippi, has a long record of racial turmoil. In 1962, it was the site of a violent protest to prevent the enrollment of James Meredith, a black military veteran. But Ole Miss students said Tuesday’s decision signals an important shift for the school and the state as a whole.

“Seeing an institution with such an unpleasant history take steps toward progress can have an immense impact on the decisions of lawmakers,” said Tysianna Marino, vice president of the University of Mississippi NAACP, prior to the vote. “We have the ability to show the nation Mississippi is not stagnant. We are ready for progress.”

At Ole Miss, the flag flies on campus near a monument honoring Confederate soldiers who died in the Civil War. This is the first time in “recent history” that a student government resolution has been introduced to remove it, said Danny Blanton, a spokesman for the University of Mississippi.

Attitudes toward the flag and other symbols of the Confederacy are swiftly changing. After 21-year-old white man, Dylann Roof, shot nine black churchgoers in Charleston, South Carolina, in June — an act the NAACP national president called “racial terrorism” — lawmakers there removed the Confederate flag from the statehouse grounds. The flag also came down in Alabama. On Monday, the Florida Senate voted to remove the Confederate emblem from its state seal.

But top Mississippi lawmakers have continued to ignore national calls to change the design of the state flag.

DEJA SAMUELOle Miss students at a rally calling to remove the state flag from campus.

Prior to Tuesday’s vote, several other public universities in Mississippi had already chosen not to fly the flag. Allen Coon, a 20-year-old sophomore who heads the Ole Miss College Democrats, introduced a resolution to remove the flag in September with the support of the university chapter of the NAACP.

“This is an issue that affects us as students on a daily basis,” Coon told The Huffington Post.

The university’s student population is 14.3 percent African-American, while the state’s population is 37.5 percent black, according to recent data.

Ole Miss students held a rally to support removing the flag on Friday, led by the school’s chapter of the NAACP. While the rally primarily aimed to draw attention to the flag, the group seeks to remove all Confederate symbols on campus.

Members of the Ku Klux Klan and Mississippi’s League of the South, a pro-secessionist group, showed up after the rally, The Clarion-Ledger reported. Marino told HuffPost that members used “racial slurs and chants.”

“They simply answered our questions with more questions, and shouted things like ‘Black lives don’t matter, whites are more supreme,’ and ‘This is exactly why we should have remained segregated,'” Marino said. DEJA SAMUELMembers of pro-segregationist and white supremacist groups protested at Ole Miss after students held a rally to take down the Mississippi state flag on campus.

Some conservative members of the Ole Miss student body oppose removing the state flag, including student senator Andrew Soper, 21, who started an online Change.org petition to keep it flying. It received “over 200 signatures in a couple hours … and then I was made to take the petition down,” he said.

Soper did not say who asked him to remove his petition, but there’s now a competingChange.org petition calling for his impeachment.

“Politically correct positions should not be forced onto the students of the University of Mississippi by a few liberal leaning students and organizations, and media bias,” Soper wrote on Facebook to HuffPost.

It’s now up to university administrators to decide whether to take down the the flag. Prior to the vote, several students said that they were under the impression that the institution might drag its feet. “I do not believe the university officials will take it down hastily,” Marino said.

One of the university’s relevant administrators, Interim Chancellor Morris Stocks, has denounced the flag. But Blanton, the university spokesman, did not indicate how soon the flag might come down. He said that the university may seek input from other campus representative bodies “before considering how to move forward.”

Buka Okoye, president of the University of Mississippi NAACP, said before the vote that the school will continue to feel pressure from its students. “We will not stop organizing until we have secured for ourselves and our future students a safe space where one can grow intellectually, and not feel uncomfortable navigating in an oppressive environment with such a blatant symbol of hate.”