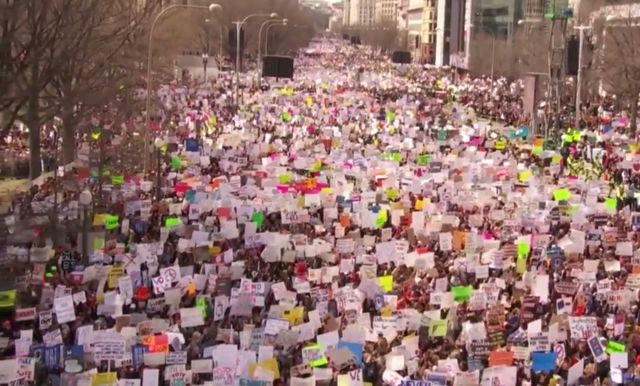 Students, Youth Speak About War, Inequality At DC March For Our Lives Rally

“I am motivated to make that change for our future generations”

An estimated 800,000 people descended on Pennsylvania Avenue in Washington, DC for the national March for Our Lives rally on Saturday. The turnout for the DC march, the largest of 800 demonstrations throughout the US and internationally, exceeded organizers’ expectations of half a million demonstrators. Some media outlets are saying that the rally was the largest in the history of the American capital. (See, “Hundreds of thousands of students march against mass violence in America ”)

High school students and other youth who attended the rally had far more on their minds than gun control and the midterm elections—the issues promoted by the media and the Democratic Party. Many sought to connect the epidemic of mass shootings in American schools to broader issues, from the promotion of militarism and war, to poverty and social inequality.

The International Youth and Students for Social Equality (IYSSE) conducted a successful and well-received campaign at the rally. IYSSE campaigners interviewed students and distributed thousands of copies of the recent statement, “The social and political roots of mass shootings in America.”

Many of those attending the rally are entering into political life for the first time and are searching for a political perspective. Opposition to war emerged as a dominant theme, although it found little expression in the official speeches and slogans.

Soriah, a high school student, said, “I think that being at war for so long has really taken a toll on citizens. We see a growing rate of police brutality as the police are becoming more militaristic with all of their assaults and killings. I think it has a lot to do with people not taking gun control seriously, and now it has expanded into a much bigger issue.” 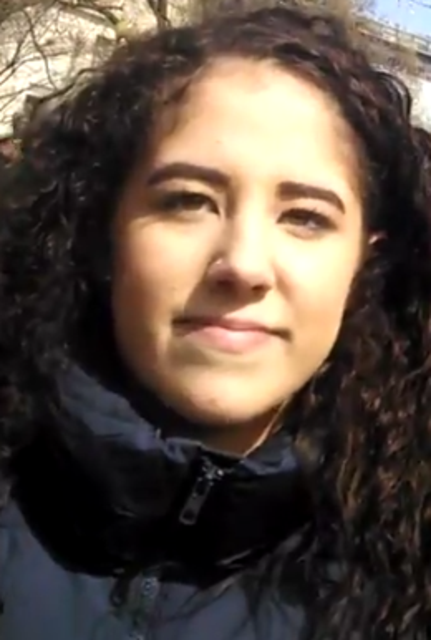 Soriah connected the growing movement of high school students to the calls for strike action among teachers, in opposition to the starving of funds for public education. “We’ve seen teachers striking, I know West Virginia teachers went on strike, Oklahoma’s teachers are striking next week. It’s just become a big problem. Teachers aren’t paid enough, the schools aren’t funded enough. We give so much money to our military to do god-knows-what overseas. Money really just needs to stay here, especially for our schools.”

Jackie, a charter school teacher from Washington, DC, came to the march with fellow teachers Danielle and Yolanda. Jackie addressed the social roots of gun violence: “No one stopped the Parkland shooter, no one checked on him along the way; he didn’t have anyone checking on him even though there were so many signs.

“Instead of giving him tools to cope with his anger, you see he turned to a weapon as the way to solve his problems. What do they see? They see violence in video games, on television, they are desensitized to the fact that a gun will take someone’s life forever.”

When asked about the constant attacks on education and how teachers often bear the burden of coping with youth affected by the social crisis, Jackie said: “They want to give me a gun to disarm violent students, but you don’t give me the financial means to even live in the city where I work. I’m supposed to carry a gun and have responsibility for that as a part of my job? On top of calling parents when students are absent or being a child’s nurse when they become sick. We’re not even given the funding to have a nurse in our building certain days of the week, and for only certain hours of the day.”

When asked what she thought about the West Virginia teachers’ strike earlier this month, as well as the need to unite workers across the country and internationally against attacks on social spending, Jackie said, “We need to understand what brings us together more than what divides us. There are teachers in rural areas and urban areas and we all want the same things. We want to be equipped to teach our students.”

Deb is a therapist from Colorado who came to DC for the demonstration. “They’re taking more money from health care coverage. It’s BS. They can give all these tax cuts to wealthy people, but people who need the money the most, they take from, including food stamps. How much money are they giving the military? Just Trump’s military parade could fund so much.

“This is not just about guns. It’s about quality of life. Access to mental health treatment. Help for those who need it. The majority of school shootings and stabbings occur from students with prior mental health issues.”

Kiresten, 20, and Emily, 21, are young workers from Virginia Beach. Kiresten works in sales, and Emily is a machine operator.

Kiresten said, “I don’t think it’s just about guns. I think there are other issues we need to talk about like mental health. … I don’t agree with a lot of these wars. I don’t agree with going into a country because you want territory. Everything that society does, seeing the wars and everybody getting bombed, that’s a big issue. If that’s how our own president is handling things, [people think] maybe that’s how I’ll handle it too.

“I don’t agree with the rich doing whatever they want and getting away with it. If I don’t pay a parking ticket, I’ll go to jail. I feel like if they had more jobs, more outreach programs, especially for kids when they’re younger… they have recreational centers— if they did more of that, it would help kids actually look forward to something. There should be more money going into jobs. Our priorities are just not straight.” 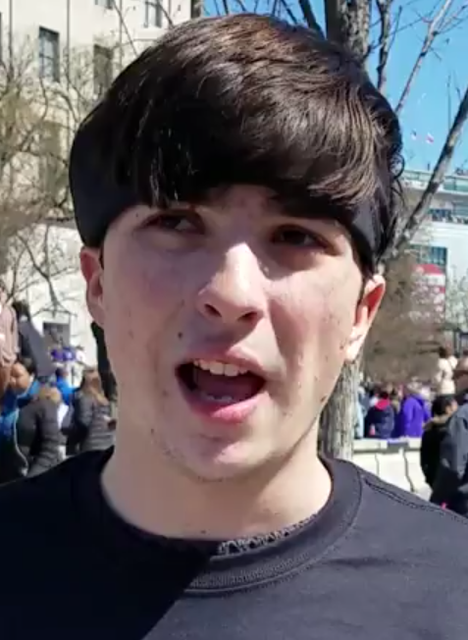 Rocco is a high school student from Washington, DC: “There are many changes that are needed in this country right now. I have grown up knowing that I have been at war for most of my life. Our future generation should not be growing up accustomed to warfare. If we really want to achieve world peace, our immediate solutions should not be going to war and taking the lives of others.”

When asked what he thought about the Democratic Party, Rocco said: “The Democrats are just as power-hungry as the Republicans. I think socialism is a better way of living in society. I think it is the ideal way of living. I would be in favor of youth and workers standing up against the current system, and changes need to happen now before things get worse in our political climate. Being at this event makes me more hopeful for the future, and it makes me more excited and motivated to make that change for our future generations.”