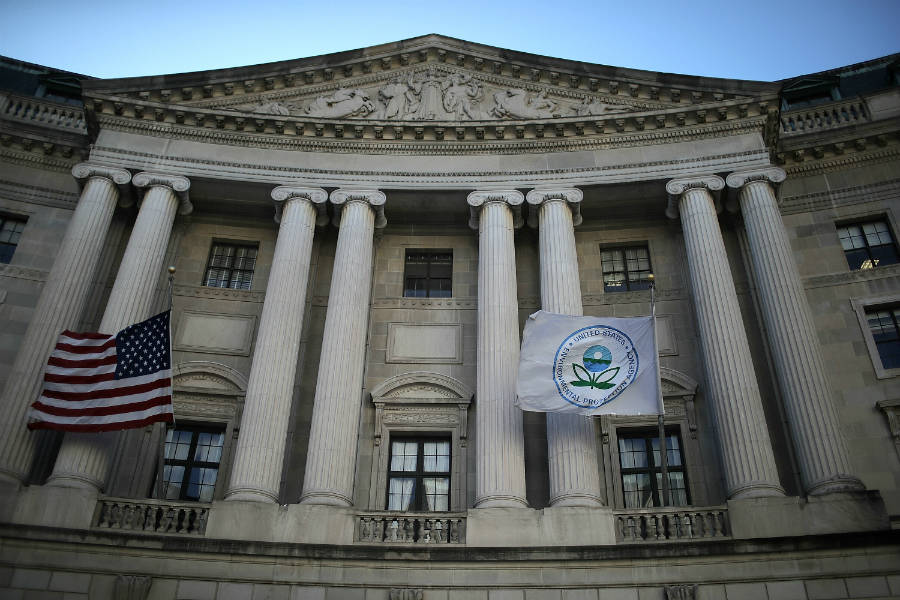 Above Photo: A new study based on EPA documents and interviews found industry influence over the EPA today is stronger than it was during the early Reagan years. Credit: Justin Sullivan/Getty Images

When EPA decisions are based on industry priorities instead of public interest, it’s regulatory capture. Researchers say industry has more sway now than with Reagan.

Under the Trump administration, the Environmental Protection Agency has veered so far from its foundational mission of protecting human health and the environment that it faces the highest risk in its 47-year history of being reshaped to serve industry rather than the American public, according to a new study in the American Journal of Public Health.

The EPA routinely faces criticism from environmental and public health advocates for allegedly quashing science and softening rules to help industry. During the early years of the Reagan presidency in particular, EPA Administrator Anne Gorsuch worked to scale back the agency’s activities.

But the new study, based on interviews with current and former EPA staff and reviews of White House and EPA initiatives, concluded that the agency is now on the edge of “regulatory capture,” when industry priorities determine policy rather than the public interest and impartial research.

“New EPA leadership has thus far aimed at deconstructing, rather than reconstructing, the agency by comprehensively undermining many of the agency’s rules, programs, and policies while also severely undercutting its budget, work capacity, internal operations and morale,” concluded the study, titled “The Environmental Protection Agency in the Early Trump Administration: Prelude to Regulatory Capture.”

The study, part of the American Journal of Public Health’s special issue on climate change, adds to the mounting scrutiny and criticism of EPA Administrator Scott Pruitt’s policy, personnel and operational decisions, which sometimes weave together.

For instance, the study suggests that the undermining of the EPA’s public health mission is enabled in part by Pruitt and his aides making policy decisions with little input from longtime staff and scientists.

Such isolation is cemented by “the extraordinary lengths that Pruitt has [gone to] to preserve secrecy and autonomy from the EPA career staff, such as cordoning his office wing off from career employees, reportedly forbidding note taking at some meetings and employing 24-hour armed guards,” the report said. The study was accepted by the peer-reviewed journal in February of this year, before some of the recent scandals around Pruitt had surfaced, including his condo rental from the wife of a lobbyist. He currently faces at least 10 investigations from his EPA tenure.

Pruitt was an energetic ally of fossil fuels in his previous role as Oklahoma’s attorney general, when he sued the Obama EPA 14 times to overturn environmental policies that affected businesses. The study said that details of Pruitt’s schedule, obtained by media and activists through the Freedom of Information Act, show that he had met almost exclusively with industry representatives as EPA administrator.

The study was conducted by 10 academic researchers involved in the Environmental Data and Governance Initiative (EDGI), a watchdog collaborative of academics, archivists and data scientists created after the 2016 election to monitor the Trump administration’s approach to federal environmental agencies and policy. Led by Lindsey Dillon, a sociology professor at University of California-Santa Cruz, the research team tracked the rhetoric, personnel and policy decisions of Pruitt and President Donald Trump. From December 2016 to June 2017, the researchers also conducted lengthy interviews with 45 current and former EPA staff members in order to get perspective on staff morale and a view of the Pruitt agenda from the inside.

Several staff members had worked at EPA under Gorsuch, who had been an opponent of environmental rules before Reagan named her to head the agency. While EPA staff said there are similarities between Gorsuch and Pruitt, current circumstances at the agency are worse.

They said they thought that industry had less power over EPA in the early 1980s and that Congress was more willing to seriously investigate accusations of malfeasance within the agency, a problem that eventually toppled Gorsuch. “Even in the `80s, there was just broader support for what the agency did,” one recent EPA retiree told the researchers. “The question was, ok, we know this is a problem … How do we fix it … No one questioned the premise of what EPA was doing.”

The study’s analysis of the Trump administration’s actions indicates that it “sought to reorient the EPA toward industrial and industry-friendly interests, often with little or no acknowledgement of the agency’s health and environmental missions.”

The EPA did not reply to emails seeking comment on the study.

The researchers cited political appointments to EPA, drawn almost exclusively from industry or states friendly to fossil fuel interests. The study said Pruitt had sought to delay, block or revoke at least 30 existing rules. Among them are the Clean Power Plan, which cuts greenhouse gas emissions from electricity generation, and a ban on the pesticide chlorpyrifos that had been recommended by EPA scientists because of its potential to harm children’s health.

The study pointed out a 60 percent reduction in civil penalties in the first six months of Pruitt’s term and an overall decline in enforcement activities.

The study also highlighted Pruitt’s efforts to get rid of longstanding scientific practices at EPA. He dismissed members of scientific advisory boards to make room for industry representatives and banned scientists who get EPA grants from serving on them. More recently, Pruitt proposed a rule that would prohibit the use of studies based on confidential health information, which he has labeled “secret science.” Scientists and regulators have warned that such a prohibition would preclude the use of major longstanding health studies that underpin key air and water pollution rules.

Pruitt’s ambitious agenda against the EPA’s core mission and the Trump administration’s move to slash its budget have prompted many veteran staffers to leave, the study said. Still, the most common reaction is for staff to keep their heads down and quietly work to protect public health and the environment, according to those interviewed by researchers. But the EPA interview subjects worried that such perseverance might not be enough to preserve the agency’s efficacy.

The study said: “As one veteran from the Reagan years reflected, by the time Pruitt and the new political leadership are done with the agency, it will have become ‘a much smaller and probably much more passive operation than what you’ve got now’—an agency, in other words, more easily circumvented or even captured by those it should regulate.”