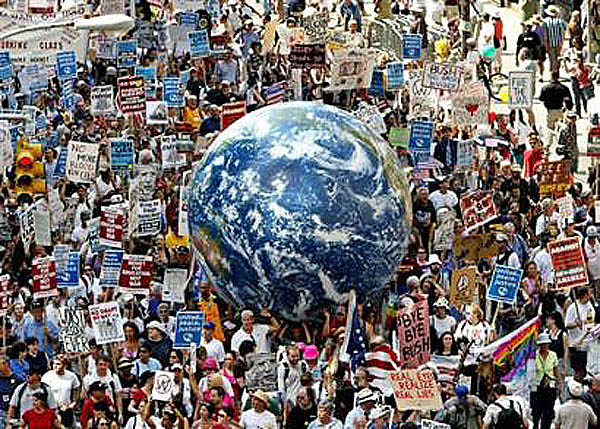 This September 2013 study analyzes 843 protests occurring between January 2006 and July 2013 in 87 countries covering over 90% of world population. The paper focuses on: (i) major grievances driving world protests (ii) who is demonstrating, what protest methods they use, and who are they opposed to (iii) achievements and repression of social movements in the short term, and (iv) the main policy demands of world demonstrators. The paper calls for policy-makers to listen, whether messages are articulate or communicate only through frustration and violence.

In recent years the world has been shaken by protests. From the Arab Spring to the “Indignados” (outraged), from Occupy to food riots. There have been periods in history when large numbers of people rebelled about the way things were, demanding change, such as in 1848, 1917 or 1968; today we are experiencing another period of rising outrage and discontent, and some of the largest protests in world history.

Our analysis of 843 protest events reflects a steady increase in the overall number of protests every year, from 2006 (59 protests) to mid-2013 (112 protests events in only half a year). Following the onset of the global financial and economic crisis began to unfold, there is a major increase in protests beginning 2010 with the adoption of austerity measures in all world regions. Protests are more prevalent in higher income countries (304 protests), followed by Latin America and the Caribbean (141 protests), East Asia and the Pacific (83 protests) and Sub-Saharan Africa (78 protests). An analysis of the Middle East and North Africa region (77 protests) shows that protests were also prevalent prior to the Arab Spring. The majority of violent riots counted in the study occurred in low-income countries (48% of all riots), mostly caused by food-price and energy-price spikes in those countries. Interestingly, the period 2006-2013 reflects an increasing number of global protests (70 events), organized across regions.

The main grievances and causes of outrage are:

Although the breadth of demand for economic justice is of serious consequence, the most sobering finding of the study is the overwhelming demand (218 protests), not for economic justice per se, but for what prevents economic issues from being addressed: a lack of “real democracy”, which is a result of people’s growing awareness that policy-making has not prioritized them—even when it has claimed to—and frustration with politics as usual and a lack of trust in the existing political actors, left and right. This demand and the crisis of political representation it expresses is coming from every kind of political system, not only authoritarian governments but also representative democracies which are failing to listen to the needs and views of ordinary people.

A profile of demonstrators reveals that not only traditional protesters (eg. activists, unions) are demonstrating; on the contrary, middle classes, youth, older persons and other social groups are actively protesting in most countries because of lack of trust and disillusionment with the current political and economic system. They are increasingly joining activists from all kinds of movements, not only in marches and rallies (the most common methods of civil protest, in 437 events), but in a new framework of protest that includes civil disobedience and direct actions such as road blockages and occupations of city streets and squares to raise awareness about their demands (a total of 219 occupations of public spaces). The period covered by this study also captures the advent of a new era of civil disobedience/direct action carried out by computer hackers and whistleblowers who “leak” massive amounts of government and corporate data. Contrary to public perception, violence and vandalism/looting appear in only 75 events, or 8.9% of world protests. Though only used by a few, 33 events record desperate methods such as hunger strikes and self-inflicted violence (eg. self-immolation or protesters sewing their own lips).

Who do protesters oppose? An analysis of main protests in the period 2006-2013 shows that demonstrators mostly address their grievances to national governments, as they are the legitimate policy-making institutions that should respond to citizens. Protestors demand that policy-makers take public responsibility for economic, social and environmental policies—that should benefit all, instead of just the few. However, protests against the inadequate political and economic system appear second in importance, reflecting significant discontent with the working of current democracies and demands for real democracy. Protestors further oppose (by order): corporations/employers, the IMF, elites, the financial sector, the ECB, military and police forces, free trade, economic/military powers (eg. EU, US, China), the G20, the World Bank, specific political parties, some social groups (eg. migrants, homosexuals, gypsies) and, in some cases, religious authorities.

Not only is the number of protests increasing, but also the number of protestors. Crowd estimates suggest that 37 events had one million or more protesters; some of those may well be the largest protests in history (eg. 100 million in India in 2013, 17 million in Egypt in 2013). As of 2013, as many as 63% of the protests covered in the study achieved neither their intended demands nor their expressed grievances in the short-term. This outcome is not necessarily negative, since many of the protests are engaged with long-term structural issues that may yield results in time. Some 37% of protests resulted in some kind of achievement, mostly in the areas of political, legal and social rights—global issues and economic justice appear the most difficult areas to achieve change.

Repression is well documented in over half of the protest episodes analyzed in the study. According to media reports, the protests that generated the most arrests were in Iran, the UK, Russia, Chile, Malaysia, US, Canada and Cameroon; the most deaths were reported in Kyrgyzstan, Egypt and Kenya; the most injuries, in Egypt, Thailand and Algeria. Our research also documented a rising concern with some modesof repression that do not imply the use of physical violence: citizen surveillance. It must be noted that while arrests and surveillance are directly linked to government-led repression, a number of the injuries and deaths may be a result of violent clashes between different groups.

The set of policies needed at the national and global levels to address the grievances described in this paper cross over virtually every area of public policy, from jobs, public services and social protection to taxation, debt and trade. Governments need to listen to the messages coming from protesters. However, policy reforms will be insufficient if governments fail to guarantee democratic participation and curtail the power of elites—not only in local and national governments but in the institutions of global governance as well. Leaders and policymakers will only invite further unrest if they fail to prioritize and act on the one demand raised in more of the world’s protests between 2006 and 2013 than any other—the demand for real democracy.