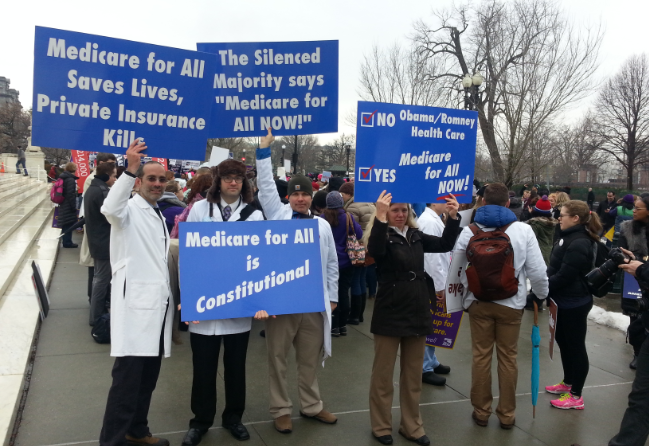 Above photo: Dr. Robert Zarr (left) and other physicians outside the Supreme Court in March, 2015. By Kevin Zeese/Popular Resistance.

Although the Supreme Court has upheld the premium subsidies under the Affordable Care Act, the law remains incapable of remedying the U.S. health crisis, physician group says

Washington, DC – Today’s decision by the Supreme Court in King v. Burwell to uphold the Affordable Care Act’s premium subsidies in about three dozen states will spare more than 6 million Americans the health and financial harms associated with the sudden loss of health insurance coverage.

For that reason alone the decision must be welcomed: Having health insurance is better than not having coverage, as several research studies have shown.

That said, the suffering that many Americans are experiencing today under our current health care arrangements is intolerable, with approximately 35 million people remaining uninsured, a comparable number underinsured, and rapidly growing barriers to medical care in the form of rising premiums, copayments, coinsurance and deductibles, and narrowing networks.

The unfortunate reality is that the ACA, despite its modest benefits, is not a remedy to our health care crisis: (1) it will not achieve universal coverage, as it will still leave at least 27 million uninsured in 2025, (2) it will not make health care affordable to Americans with insurance, because of high copays, deductibles and gaps in coverage that leave patients vulnerable to financial ruin in the event of serious illness, and (3) it will not control costs.

Why is this so? Because the ACA perpetuates a dominant role for the private insurance industry. Each year, that industry siphons off hundreds of billions of health care dollars for overhead, profit and the paperwork it demands from doctors and hospitals; denies care in order to increase insurers’ bottom line; and obstructs any serious effort to control costs.

In contrast, a single-payer system – an improved Medicare for All – would achieve truly universal care, affordability, and effective cost control. It would put the interests of our patients – and our nation’s health – first.

Single payer is simple: everyone in the U.S. would be covered for all medically necessary care in a single program financed by equitable taxes.

By replacing multiple private insurers with a single, nonprofit agency like Medicare that pays all medical bills, we would save approximately $400 billion annually by slashing the administrative bloat in our current private-insurance-based system. That money would be redirected to clinical care. Copays, coinsurance and deductibles would be eliminated.

Further, such a single, streamlined system would be able to rein in costs for medications and other supplies through the system’s strong bargaining clout – again, to our patients’ benefit.

A single-payer system would also be legally robust.

Because of the ACA’s administrative complexity and flaws – largely reflecting its accommodation to the private health insurance industry and other corporate, profit-oriented interests in U.S. health care – it is particularly vulnerable to the kind of legal challenge we saw today.

Our patients, our people and our national economy cannot wait any longer for an effective remedy to our health care woes. The stakes are too high. We need to move beyond the administratively wasteful, complex and inadequate ACA to a more fundamental, rational single-payer national health program.

Contrary to the claims of those who say we are “unrealistic,” a single-payer system is within practical reach. The most rapid way to achieve universal coverage would be to improve upon the existing Medicare program – which is celebrating its 50th anniversary this year, showing it has stood the test of time – and expand it to cover people of all ages. There is legislation before Congress, notably H.R. 676, the “Expanded and Improved Medicare for All Act,” which would do precisely that.

What is truly unrealistic is believing that we can provide universal and affordable health care in a system dominated by private insurers and Big Pharma.

The American people desperately need a universal health system that delivers comprehensive, equitable, compassionate and high-quality care, with free choice of provider and no financial barriers to access. Polls have repeatedly shown an improved Medicare for all, which meets these criteria, is the remedy preferred by two-thirds of the population. A solid majority of the medical profession now favors such an approach, as well.

We pledge to step up our work for the only equitable, financially responsible and humane cure for our health care ills: single-payer national health insurance, an expanded and improved Medicare for all.

Physicians for a National Health Program (www.pnhp.org) is a nonprofit research and education organization of more than 19,000 doctors who support single-payer national health insurance. To speak with a physician/spokesperson in your area, visit www.pnhp.org/stateactions or call (312) 782-6006.

To read more about the problems with the Federal Health Law, see: From Exchange to Egalite A. W. Gaffney.