‘Subsidizing The Spread Of Covid’

Above photo: Maricopa County constable Lenny McCloskey speaks with a tenant after evicting her for non-payment of rent on October 2, 2020 in Phoenix, Arizona. John Moore/Getty Images.

“Giving ‘Covid relief’ to those most likely to evict is like giving money to stop climate change to oil barons—it makes the problem worse.”

Nearly 200 corporate landlords received $320 million in federal pandemic-related assistance only to turn around and file more than 5,380 evictions between mid-March and mid-October of last year, recklessly displacing thousands of impoverished Americans in the midst of a public health and economic emergency.

Although corporate landlords have benefited from public subsidies and favorable tax laws for years, the report details how these actors—under crisis conditions—were able to capitalize on a novel form of financial aid, specifically loans from the Paycheck Protection Program (PPP), part of the $2 trillion CARES Act passed by Congress in late March 2020.

Even as they received millions of dollars in taxpayer-funded support, corporate landlords continued to kick thousands of tenants to the curb despite the recommendations of public health officials who urged people to shelter-in-place to slow the spread of the virus.

The report’s data were drawn from public records in 25 counties across Arizona, Florida, Georgia, Tennessee, and Texas, meaning that the number of renters evicted by corporate landlords throughout the U.S. is almost certainly higher. Some of the top offenders are depicted in the table below: 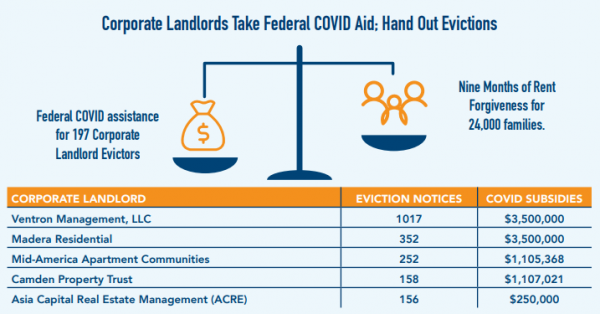 Previous studies have shown that corporate landlords are more likely than “mom-n-pop” landlords to evict tenants, and yet that did not prompt legislators to make allocation of public aid dependent on commitments to halt displacement.

They lack human empathy and can't see past data.

While corporate landlords took advantage of no-strings-attached coronavirus relief that did not mandate a corresponding pause in eviction filings, the report notes how much more effectively housing security, and thus public health, could have been improved had the government provided rental assistance directly to tenants instead of routing the subsidies through private, profit-maximizing housing entities.

According to the report:

Jobs With Justice compared the taxpayer-funded support of eviction-prone landlords to the public bailouts of climate-destroying fossil fuel corporations—something the Trump administration also implemented in its pandemic response—both of which have deadly consequences.

Recent studies have confirmed that evictions are a matter of life-and-death. As Common Dreams reported last November, researchers found that between the onset of the pandemic in mid-March and the implementation of a national eviction moratorium in early September, the premature lifting of statewide protections in the spring and summer caused more than 433,000 excess Covid-19 infections and 10,700 excess deaths.

“Giving ‘Covid relief’ to those most likely to evict is like giving money to stop climate change to oil barons—it makes the problem worse,” the group tweeted. “By subsidizing corporate landlords through PPP loans, tax breaks, and sweetheart deals, Congress was subsidizing the spread of Covid.”

President-elect Joe Biden and Congress, soon controlled by Democrats, “must immediately end the policy of handing out public ‘Covid relief’ to the corporate landlords who are making Covid worse,” said Jobs With Justice.

“They must stop funding these evictors,” the group added, “and start getting relief to tenants.”

The coronavirus relief package passed by Congress in December extended the CDC’s nationwide eviction moratorium through the end of January 2021, temporarily boosted unemployment insurance benefits, and distributed $25 billion in emergency rental assistance. While they called this legislation helpful, the report authors noted that these measures are insufficient considering the scale of the problem and “merely push a mounting crisis down the road.”

“To prevent this housing catastrophe,” the authors continued, lawmakers should further extend eviction and foreclosure moratoriums and cancel rents that have accumulated as a result of the coronavirus crisis, with landlord compensation coming from the federal government.

“In addition to Congress and the White House establishing new relief and protection programs to keep families in their homes as the pandemic deepens this winter and into the spring, corporate landlords also have an important role to play,” the authors noted.