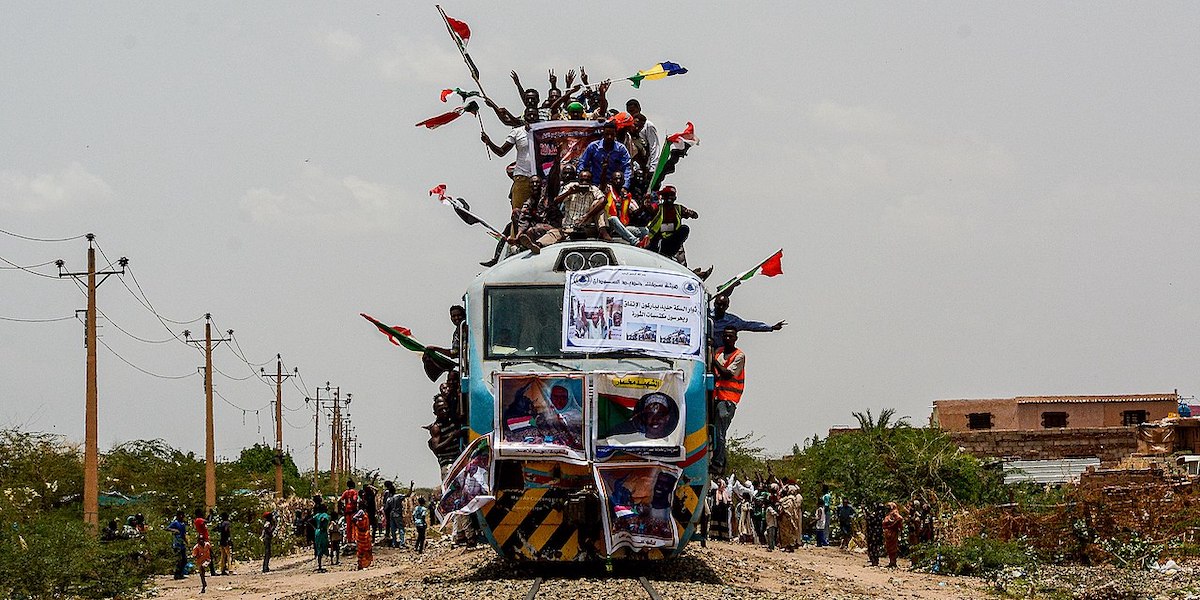 Sudan: The Second Wave Of Revolt

Above photo: A train arrives in Khartoum from Atbra city in August, 2019, two days before the final signing of the Draft Constitutional Declaration.  Osama Elfaki.

The Sudanese revolution has been unique in its depth and scope.

Yet the path to progress remains fraught with obstacles.

The second wave of revolts in the Middle East and North Africa (the ‘MENA’ region) began in Sudan, in December 2018. This is interesting when looked at in the context of a decade of dissent in the region. A black African nation, Sudan is at the margins both geographically and metaphorically. And despite the consistent attempts of post-colonial Sudanese elites to promote Arab identity, the Arab world has remained ambivalent about the country.

Perhaps this is why, in the early days of the revolution, Sudan’s protests gained little attention. Or perhaps the lack of interest was due to the general mood of defeat in the countries of the first wave, most of which saw their revolutions stolen. ‘You will fail,’ I was told more than once by friends. An Egyptian acquaintance put it more emphatically: ‘You will be crushed.’

For many Sudanese, the uprising was inevitable. This is not to say that everyone saw it coming, but when it came people mobilised quickly. For one thing, smaller uprisings had been taking place for years prior to 2018, leading to an accumulation of organisational know-how. And crucially, by 2012 all hope for reform by the regime had been lost. The first slogan that stuck in the early days of the protests was simple: Tasguut bes (Fall, that is all).

Sudan’s post-independence history has swayed predictably between two poles: authoritarian military regimes, brought to power by coup d’états in 1958, 1969 and 1989; and civilian governments that came on the heels of mass uprisings that toppled military dictatorships in 1964 and 1985. The Inqaz (Salvation) regime, led by Omar al-Bashir, was the bloodiest in the country’s history. It lasted for nearly 30 years but could not remain forever.

What stunned even those with intimate knowledge of Sudanese social movement history was not that an uprising took place but its form. Past mass uprisings were deemed successful and ended quickly. This one was sustained non-violently for eight long months in the face of acute state brutality. Past uprisings were led by unions and professional trade associations.

This one was too, in particular by the Sudanese Professionals’ Association (SPA), but the union shared leadership with ‘resistance committees’ – local entities composed mainly of youth who, at times secretly, organised and mobilised their communities. In the past, women took part in street protest. This time they dominated it.

In 1964 and 1985, revolts centred on Khartoum. This time protests began hundreds of kilometres away, in the cities of Atbara and al-Damazeen, and only later spread to the capital. At the height of the revolution in April and May 2019, when protesters occupied the area in front of the military general command, tens of thousands flocked from all corners of the country to take part. Smaller sit-ins took place in at least 12 other cities.

While some tactics used by the revolutionaries in Sudan were familiar, such as general strikes, others were new, especially the sit-ins. These proved not only effective in mobilising but became laboratories for education, cultural production and consciousness raising. In many respects Sudan’s December revolution is exemplary; popular organising was both sophisticated and thorough. The revolution also tried to learn from past mistakes, internalising lessons from recent history and revolutions of the first wave elsewhere, in particular in neighbouring Egypt.

These measures, unfortunately, did not prevent the prospect of counter-revolutionary action. In Sudan, the first sign of trouble was apparent soon after al-Bashir and his ruling National Congress Party fell and were replaced by a Transitional Military Council (TMC). Negotiations began in April 2019 between the TMC and the Forces for Freedom and Change (FFC), the umbrella of civilian political forces that included the SPA and coalesced around the set of demands known as the Declaration of Freedom and Change.

The style of the negotiations was painfully familiar: elitist, non-transparent and sensitive to pressure from countries such as the United States and Germany. The resulting constitutional document, agreed in August 2019, embodies many of the demands of the revolution but also lacks a clear mechanism for dismantling the military, despite an extended transition period.

The year since the signature of the power-sharing deal between the TMC and the FFC has been tumultuous. The mood has soured not just with the outsized role the military continues to play in politics but also with the civilian component of the government. Here, despite important reforms made to the legal sphere, there remains a decidedly neoliberal emphasis. There is also a lack of any clear vision for dismantling the ex-regime and military’s stranglehold on the economy or bringing justice to the families of those killed and injured by the al-Bashir government.

Frustration has regularly exploded into protest as the economic crisis deepens and people in the war-affected regions continue to live in terror. The recently signed peace agreement may change this but so far efforts have focused on how to accommodate the various armed movements in state structures, rather than on transitional justice. The transitional legislative assembly has not yet been formed, more than a year on; nor have many of the expected independent commissions. Casting an ominous shadow over the transition is the Rapid Support Forces (RSF) paramilitary body formed by al-Bashir from elements of the Janjaweed militias, which are accused of committing war crimes in the Darfur conflict that began in 2003. The leader of the RSF, Mohamed Hamdan Dagalo (‘Hemedti’), is the deputy of the sovereignty council. He has been trying to reinvent himself from mass killer to saviour, and his forces, the RSF, as the only competent entity in the country.

Despite this, the revolutionary movement remains vibrant. The year since the power-sharing deal came into force has seen a proliferation of protest and ‘demand-based’ groups, as well as wide-scale union restructuring. The resistance committees are influential at a local level and are better connected. Women’s groups have been working hard to (re)build a women’s movement capable of standing up to attempts by civilians and military alike to marginalise them.

While to a large extent, analysts have shed the simplistic way in which the first wave of uprisings in the region was treated, and by extension mistreated (for example, through the simplistic binary of success and failure), it remains the case that there is little analysis of the regional and global forces of counter-revolution.

What defeats uprisings, or rather their ability to effect radical transformation, is not simply internal forces. The way the international community (i.e. the imperialist and former colonial powers) suffocate countries like Sudan – desperate for economic aid – in a web of neoliberal conditionality, is crucial to understanding the success of these movements. Regional powers such as Saudi Arabia and the United Arab Emirates also have a lot to answer for in their support of militaries and militias across the region. As such, uprisings, not just in the MENA region but everywhere, remain vulnerable to takeover and defeat as long as there is a continued absence of concrete, cross-border solidarity.

Sara Abbas is a political scientist. She is co-author of a chapter inA Region in Revolt: Mapping the recent uprisings in North Africa and West Asia(Daraja Press).