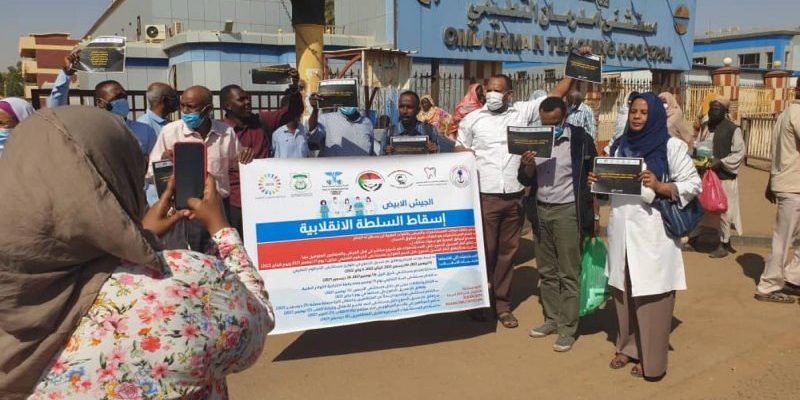 Sudanese doctors call for an end to attacks on hospitals, staff, ambulances, and patients by security forces.

Khartoum – Hundreds of Sudanese doctors and medics marched in Khartoum and other parts of Sudan on Sunday to protest against violence by security forces against the medical staff, healthcare facilities, and patients.

Slogans against the military and its October coup were raised and a petition was handed to the United Nations representative in Sudan, calling on the international community to document the violations against the Sudanese people.

The doctors’ march comes as neighborhood-based resistance committees, political parties, and other pro-democracy groups carry out an ongoing campaign of protests under a “no negotiation” slogan.

The crackdown by security forces has left 62 protesters dead since October, the latest of whom is a 26-year-old protester who was killed on Sunday after being hit by a tear gas canister in the neck by security forces, according to the Central Committee of Sudan Doctors.

Sudanese doctors on Sunday gathered in front of the hospitals in Khartoum that have witnessed violations during the protests that have rocked the country since the coup, including Al-Juda, Omdurman Teaching Hospital, Alfaisal, Al-Arbaeen, the International Hospital.

The march of the doctors, whom the protesters have dubbed as “the white army”, has received wide support from the people and resistance committees.

Wearing their white lab coats, the doctors stood in front of Omdurman Teaching Hospital in Khartoum’s twin city and flashpoint district Omdurman, as well as Al-Juda in the capital, raising banners demanding security services halt the violence and calling for full civilian rule.

Other medical staff, including pharmacists, medical laboratory workers, nurses, and other professionals, also joined the march.

Resistance committees that have been leading continuous protests for almost three months have strongly supported the doctors.

“The doctors’ groups and the resistance committees are shouldering the same goals and coordinating together on the ground to save the lives of protesters,” she told Middle East Eye.

“Doctors have given us training, while we protect them in order for them to do their jobs.”

From in front of Al-Juda hospital, doctor Ahmed Zahir accused the security forces of committing crimes against humanity and called for their prosecution after the toppling of the current military regime.

“What the security organs have committed against protesters in Sudan are crimes against humanity. They have raided and stormed hospitals, prevented the ambulances from evacuating the wounded, attacked patients and the wounded inside hospitals,” he told MEE.

In Omdurman, meanwhile, another doctor, who asked not to be named for security reasons, said that he had been reminded of the attacks on hospitals that took place in January 2019 during the protests against now-deposed longtime ruler Omar al-Bashir.

“What is happening now proves that security solutions and the use of violence are the same under the dictatorship and the military regime,” he said.

Under the protection of the resistance committees, the white army marched in protest on Sunday to the office of the Special Representative of the Secretary-General for Sudan (SRSG), where they handed a letter to be submitted to the UN Human Rights Council.

“This is a letter to the Human Rights Council in regards to the human rights violations related to the health services in Sudan since the military coup d’etat,” the letter read.

“We are profoundly concerned, and very much appalled by the continued violations by the military coup forces to the Sudanese people’s rights to life, health, freedom from oppression, and freedom of expression and peaceful protest.

“Since the 25 October 2021 military coup d’etat, there have been many alarming reports in relation to attacks on hospitals and measures taken to impede necessary treatment of the injured.”

The letter also documented a series of violations committed by security forces, including forcibly preventing the National Blood Bank staff from performing their duties, obstructing the movements of medical staff, road closures, arrests of medics, and suspending the work of the mobile coronavirus testing team.

MEE received no response to its request for comment from the military spokesperson in Sudan.

Abdul-Moneim al-Tybe, a leading member of the United Medical Office, an umbrella of the doctors’ committees, told MEE that representatives for the doctors have discussed the violations with the Sudan representative of the Commissioner for Human Rights, including cases of intentional killing, rape, and aggression against doctors.

“We discussed the serious cases including the shots to the head and chest, the documented cases of rape, as well as the attack against the hospitals, doctors, and patients,” he added.

Marathon mediations are ongoing to solve the current crisis, including an initiative presented by the UN special envoy Volker Perthes and one drawn up by the National Umma Party (NU), among others.

Perthes on Saturday announced the launch of the UN-facilitated dialogue initiative in which the military, armed movements, political parties, civil society, and resistance committees will be invited to participate.