Above photo: Streets in Khartoum have been deserted as protesters reject the rule of Sudan’s military council (AFP)

Build the barricades, then run. The message from protest leaders to the young Sudanese on the streets of the capital has been consistent ahead of Sunday’s call to began a comprehensive campaign of civil disobedience.

Initially used to guard the sit-in outside Sudan’s military headquarters – where protesters demanded the ruling Transitional Military Council (TMC) step aside – barricades built from bricks and metal scavenged from the very roads they block have been a symbol of Sudan’s protest movement.

But after Sudanese forces forcibly dispersed the sit-in on 3 June, those protesters have now spread their opposition through the country.

“The barricades are your guards,” according to one of the many rallying calls released by the Sudanese Professionals Association (SPA), the group that spearheaded protests against former president Omar al-Bashir since December.

Sudanese people answer the call of the Sudanese Professionals Associations and allies for Civil Disobedience until the TMC hands over power to a civilian government.
Pictures from the streets of Port Sudan today morning.#SudanUprising#العصيان_المدني_الشامل pic.twitter.com/Of1ENHfYqD

The SPA has been encouraging protesters to build barricades along Khartoum’s main roads and side streets, but instead of guarding them as they did at the sit-in, to immediately run away.

At least 118 people have been killed by Sudanese forces since they dispersed the sit-in on Monday, according to the protest-aligned Sudanese Doctors’ Committee, which believes the real number killed is much higher.

The Rapid Support Forces (RSF) paramilitary group has been blamed for last week’s massacre. Built from the Janjaweed militia accused of committing war crimes in the western Darfur region in the early 2000s, the RSF has now spread throughout Khartoum.

While protesters at the sit-in would man their barricades and face down the soldiers who were often sat directly opposite them, protest leaders like the SPA are now calling on protesters to be more careful.

Civil disobedience, they say, is the new phase of their movement.

It came into full effect on Sunday, with the streets of Khartoum and other cities abandoned and businesses shuttered. Banks were closed, flights at Khartoum airport were cancelled, and the operation of Port Sudan was halted, despite reported attempts by the military council to force staff into work over the past week.

The SPA said aviation, electricity company and bank workers had all been detained in an attempt to force them into working during the civil disobedience campaign.

The protests began in December, when citizens in the northern town of Atbara, exasperated by a surge in living costs, burned down the ruling party’s headquarters.

The image spread, and soon cities across Sudan were protesting, calling for an end to the rule of Bashir after 30 years in power.

They achieved that goal on 11 April, a few days after protesters began the sit-in outside the military headquarters in Khartoum, but were angered that the TMC replaced him.

The sit-in remained, and protest leaders had been in negotiations with the military for a handover of power to civilians but, already stalling, the process was ended with the sudden attack on the sit-in last week.

The internet has almost completely shut down across the country since Monday, and RSF personnel have fanned out across the Khartoum, accused of regularly and randomly attacking passers-by, while in recent days eyewitnesses have reported an increase in unknown gangs stalking the streets.

Health ministry official Suleman Adula Gadar told MEE that 11 people had been killed over the past two days by a recent surge in the activity of “outlaws” operating within the chaos caused by the past week’s events.

Khartoum residents told Middle East Eye that going out onto the streets has become unsafe and many avoid it if possible, describing their situation as a kind of mass house arrest.

“People are trying to store supplies for the civil disobedience,” one protester, who did not want to be named, told MEE.

How to implement that civil disobedience has become a hot topic of discussion among protesters, who try to share information through SMS messages or handwritten notes handed out in their neighbourhoods to bypass the internet restrictions.

The Riyadh Resistance Committee, one of the neighbourhood teams set up to organise localised protest activities while Bashir was still in power, echoed SPA instructions to “barricade then run,” but also called for protesters to withdraw to side streets whenever confronted by the RSF. 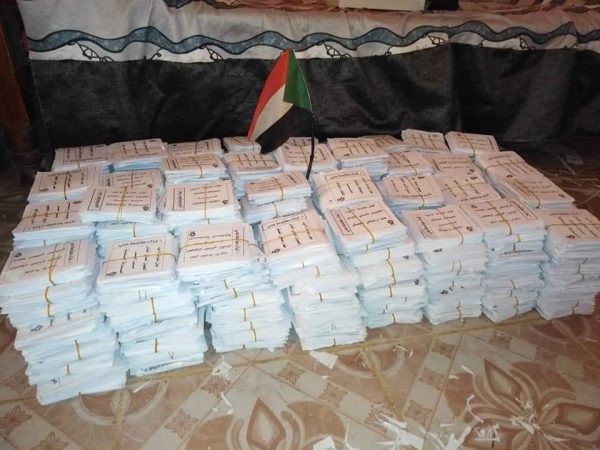 The SPA has called on protesters to use this campaign to bring the country to a halt as a way of loosening the military council’s grip, by refusing to work or use any service, especially financial, that could benefit them.

Videos trickling out of Sudan, shared by the few who manage to circumvent the internet cuts, show a cat-and-mouse game of protesters building barricades and the numerous RSF soldiers who have flooded Khartoum trying to clear them so they can navigate the city with their notorious pick-up trucks armed with machine-guns

The SPA has also warned against “miserable” tricks by the military council, accusing soldiers of leaving weapons on the streets to tempt protesters into turning to violence.

But there also appears to be an increase in the number of Khartoum residents ready to return to the streets in large numbers.

In Khartoum’s sister city Omdurman, a major rally took to the streets on Friday night and others followed on Saturday.

In Bahri, also adjoined to the Khartoum and Omdurman, rallies reportedly came under attack by forces trying to break up the barricades.

The doctors’ committee confirmed on Sunday night that protester Waleed Abdel Rahman had died from after being shot in the chest.

“The Transitional Military Council continue to take the lives of unarmed citizens and undermine their security and stability inside their homes and streets,” it said.