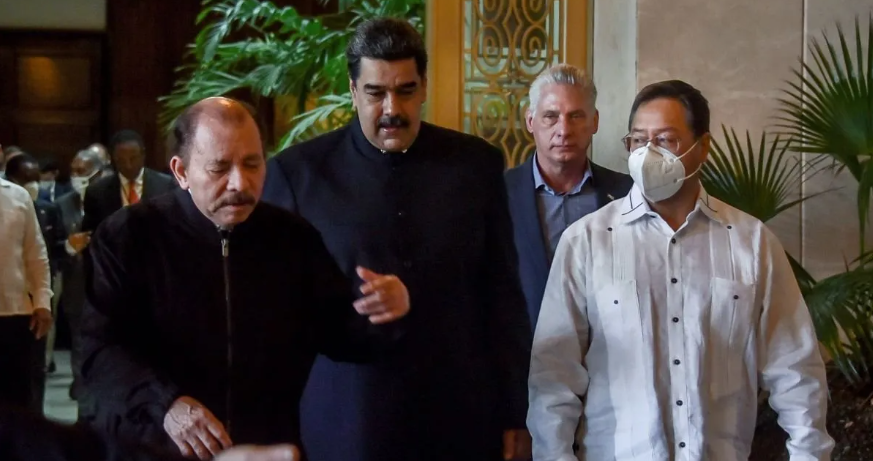 Summit Of The Americas Could Be Biden’s Foreign Policy Embarrassment

Above photo: From left to right, President Ortega, President Maduro and President Arce of Nicaragua, Venezuela and Bolivia (respectively).

The grandly named Summit of the Americas is due to be held in Los Angeles next month, if the Biden administration can decide who to invite and what to talk about if they turn up. As things stand, Bolivia, Mexico, Argentina, Honduras and most of the Caribbean states have said they will not attend if Cuba, Venezuela and Nicaragua are not included.

Although Biden no longer calls them the ‘troika of tyranny’ like Trump did, the governments of these three countries are still ostracized by Washington. But in Latin America, Biden’s threat to exclude them from the party has not gone down well. While it might be Washington’s turn to host the summit, the invitation list is supposed to include every state in the two continents, regardless of political disposition. Mexico’s president Andres Manuel Lopez Obrador, one of those threatening to stay away, asked ‘how can a summit be “of America” without all the countries of America?’ He’s now been joined by several other countries calling on Biden to reconsider. Even Brazil’s Jair Bolsonaro says he’s not going to Los Angeles, although this may be more to do with US criticisms of his attempts to undermine Brazil’s October elections.

So far, the summit lacks not just an invitation list but also an agenda. Biden’s priorities seem to be threefold. One is to find ways to stem the flow of migrants crossing the Rio Grande. While he might reach some sort of agreement that he can offer to a skeptical US public, the chances of it having any effect on migration numbers are slim. A year ago, Kamala Harris was charged with producing a migration strategy that would address its “root causes”, but nothing that would achieve this has yet emerged. For example, concern about numbers arriving from Cuba has not triggered any easing of US sanctions, even though Cubans are leaving because of harsh economic conditions caused partly by the US embargo and made worse by the pandemic and its effect on tourism. If anything, Biden has stepped up the pressure on Cuba by making trade, financial dealings and travel even more difficult.

Biden’s second objective is to urge Latin American countries to stop building close ties to China and Russia, but he faces a hard battle to shift Latin America’s international allegiances. Unlike China, he’s not able to offer major investment without political strings attached. Nor can he overcome Latin American sentiment that Russia’s attack on Ukraine has been provoked by US and NATO expansionism in eastern Europe. Biden is said to listen to General Laura J. Richardson, head of U.S. Southern Command, who seems to have persuaded him that a new Cold War must be fought in Latin America. However, as Marcos Fernandes has pointed out, it’s not a picture recognized by many governments, who see their links with China, Russia, India and other eastern economies as productive partnerships, helping to revive their post-pandemic economies. China, in particular, was quick off the mark in supplying ant-Covid vaccines to Latin America, vastly outstripping the US response. Meanwhile, Biden spends $billions on a proxy war and is as indifferent to escalating food prices and food insecurity in southern countries as he is to similar problems in the US.

NATO’s recent overtures to Colombia, even though it is hardly part of the “North Atlantic,” are part of this proxy war. Washington sees Colombia as emblematic of a successful relationship with a Latin America country.  Glossing over its government’s recent history of killing peaceful protesters, US National Security Adviser Juan González said in April that “Colombia symbolizes all the best” of Biden’s vision for the continent. He added that “we are talking about one of the most vibrant democracies in the hemisphere.” When he promised that the US would not “measure, evaluate or punish a country like Colombia,” he was offering the usual free pass available to Washington’s allies, regardless of their human rights record.

In the same month Latin Americans were given another reminder of US hypocrisy when former Honduran President, Juan Orlando Hernández, was extradited and imprisoned in New York. He had left office only in January, having been Washington’s closest ally in Central America for a decade, despite staying in power via two fraudulent elections and violently suppressing any dissent. As well as turning his country over to North American extractive industries which destroyed local communities, Hernández spurned advances from China and backed US foreign policy, even relocating Honduras’s embassy in Israel to Jerusalem (to follow the move made by Trump). But he’s now served his purpose: he will likely spend the rest of his life in US prisons after the US belatedly admitted that he had been running a narcostate.

Biden’s third aim is to separate off Cuba, Nicaragua and Venezuela from the rest of Latin America, hoping that even though the continent has shifted to the left he can maintain US influence over governments such as President Xiomara Castro’s new administration in Honduras and President Gabriel Boric’s in Chile. But even a firm US ally like Colombia may soon have a more open agenda if Gustavo Petro wins May’s election, given that he has already promised to re-establish relations with Nicolás Maduro’s Venezuela. If Lula wins in Brazil in October, he will call for the US to recognize Maduro as the legitimate Venezuelan president and end the farce of pretending that Juan Guaidó is the real head of state. He will also want more open relations with Nicaragua and Cuba. Costa Rica has a new president, Rodrigo Chaves Robles, still a firm ally for Washington, but who has promised better relations with neighboring Nicaragua. In the Caribbean, the countries in the regional grouping CARICOM are insisting that Cuba be invited to Los Angeles, even though it is not a CARICOM member.

I recall that when the US-inspired coup toppled Manual Zelaya as president of Honduras in 2009, almost all Latin America leaders met shortly afterwards in Managua. Even right-wing leaders joined Hugo Chávez, Rafael Correa, Evo Morales and Daniel Ortega in condemning the coup. This show of Latin American unity only lasted a few more years, until the US installed a US puppet, Luis Almagro, as head of the Organization of America States in 2015 and put together its “Lima Group” of allies in 2017. But now, US influence in the region is waning again: it has no ambassador in eight of the countries, the OAS is discredited, the Lima Group is falling apart and electorates are voting in new administrations which, at best, are wary of US intentions. By late this year Latin America’s four biggest economies could all have left-wing presidents.

At the previous summit in 2018 in Lima, it was only Donald Trump who failed to attend. The last fully attended summit was in 2015 in Panama City, when the brief rapprochement between the United States and Cuba led to a presidential handshake between Obama and Raúl Castro. Since then, relations between Washington and its southern neighbors have worsened. But Biden’s agenda of appeasing domestic opinion on migration, pandering to right-wingers in Florida who want Cuba, Nicaragua and Venezuela ostracized and pursuing a proxy war against Russia has little to offer Latin Americas who want peace and economic recovery after the pandemic. Biden seems to want the Summit of the Americas to address his concerns, not those of Latin America. If the event is a flop, it will be his fault.