Super Bowl 51 Action – Punt the Pipelines For People And Planet

Super Bowl 51 is HERE, in Houston, Texas and we have an opportunity to convey a critical message to millions of people.  We must demand an end to a Carbon Based Economy, switch to a Clean Energy Economy, and end all new pipelines to protect our sacred water people, and planet.

We need your help.

In the air above the stadium we will fly an airplane with an urgent message to divest.

On the ground, we will be at the gates of the Super Bowl drawing attention with banners, signs, while we march, drum, dance, sing, and pray to protect our sacred water, people, and planet.

Please, donate $1, $10, $100 or whatever you can to help fund this Super Bowl LI Action to Punt the Pipelines for People and Planet. The airplane will reach tens of thousands of people at the game and millions on television and through social media.

Every $650 we raise is one hour in the air. The longer we fly the more people we can reach.

With your help, as we fly a sign in the sky, march at the gates and spread the word over the Internet, we can ask Trump and all Americans to stop, divest, and defund all ­new pipelines by signing our petition at TrumpDivest.com.

Any remaining funds will be used for legal fees if any of our protestors are arrested during this action, and to support the water protector camps in Texas.

Please join us, together we can transform the nation and demand President Trump divest and lead the way to Make America Green Again. 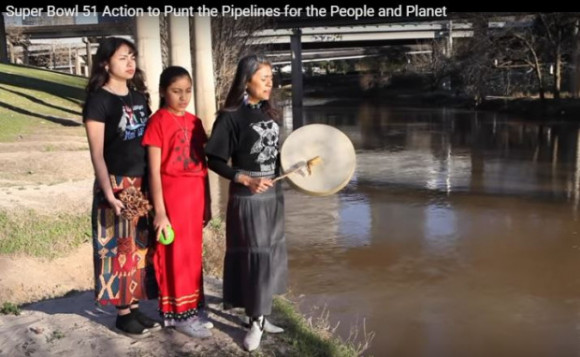 Trump Divest And Stop New Pipelines For The People And Planet

Petition Text: Divest from and stop all new pipelines a.k.a Black Snakes, shift to renewable energy, and protect the American people and our planet over the short term profits of the Oil Oligarchy.

Why is this important?

The United States has the largest web of energy pipelines in the world, extending more than 2.4 million miles. The network of crude oil pipelines in the U.S. is 72,000 miles that connect regional markets.

Established by the Pipeline and Hazardous Materials Safety Administration (PHMSA), a significant incident is classified when results of serious injury or fatality occur, costs incur more than $50,000, releases more than five barrels of volatile fluids such as gasoline or 50 barrels of other liquids, or results in a fire or explosion.

Science and experience have proved that carbon infrastructure, i.e. fracking, pipelines, export terminals are faulty. The consistency of pipelines is not guaranteed, and the possibility of ruptures is inevitable thus, impacting the water, land, and air to irreversible conditions. The impact these pipelines and the chemical plants they feed cause long-term health effects of exposure to toxic air pollution, and the threat of disastrous industrial facility chemical releases. These conditions impose serious ecological risk to our communities, and more serious effects in low-income and communities of color.

With Trumps recent executive orders to advance approval of the Keystone XL and Dakota Access oil pipelines in addition to streamlining the regulatory process for pipeline construction and expedite the environmental review process, we the people must take back our rights to clean water, air, and land and not wait on the current administration to act in the best interest of the people and our environment.

It is in the best interest of the American people, the banks, and Trump to divest from this old dirty energy economy and invest in a new clean energy economy with renewable energy, Green Sustainability, and a revitalization of the existing pipeline infrastructure that is currently deteriorating.