Above: Black Lives Matter protesters block the light rail in Minneapolis at the Super Bowl. Source Unicorn Riot. All photos in this article from Unicorn Riot.

With the attention of the country focused on Minneapolis, MN, people seeking economic and racial justice used the opportunity to get their message out through protest and resistance actions.

Rebel Z showed a live video of a “Take a Knee” protest over racism against black people in the United States.

Unicorn Riot, which does excellent coverage of protests in the United States, covered a series of protests. They provided live coverage of a Black Lives Matter protest that blocked the light rail going to the stadium as people were heading to the Super Bowl, .

There were also protests leading up to the Super Bowl. Here are portions of reports from Unicorn Riot. 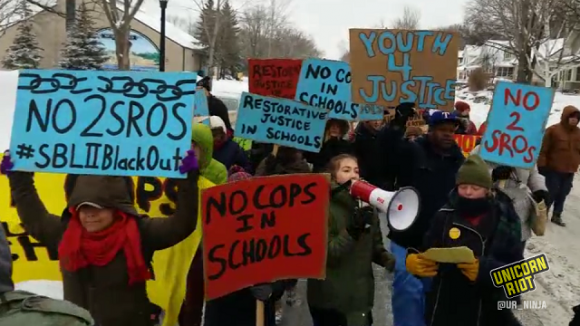 On the eve of the Super Bowl, youth in Minneapolis held a youth march calling for police out of their schools. Unicorn Riot reports:

On the day before Super Bowl LII, youth organized and led a march to the home of the chair of the local school board with a series of demands, including an end to employing police inside of Minneapolis Public Schools. Unicorn Riot was live documenting the event.

Water protectors used the Super Bowl as an opportunity to protest against US Bank for their support for pipelines and other fracked gas infrastructure projects.

Water Protectors from South Dakota, Minnesota, Iowa, and beyond are coming to Minneapolis to demand that US Bank keep its promise to divest from oil and gas pipelines, including Energy Transfer Partners (ETP), the company behind the Dakota Access Pipeline.

Three days before the Super Bowl, activists focused their attention on the Minneapolis mayor calling for investing in communities, not in police. “Dozens of community members blockaded the streets around Minneapolis Mayor Jacob Frey’s condo to implore the mayor to divest resources from the police and invest into communities. Protesters dropped a banner that read “Frey, Cops ≠ Safety” and left signs encouraging police divestment in front of Frey’s residence. No arrests were made.”

On Friday, February 2, 2018, an action at the Home Depot called on corporations to stop supporting oppressive immigration policies and create better wages and benefits for janitors. The action was titled ‘Super Bowl Protest: Tackle Corporate Greed‘ and organized greatly by Navigate MN “a non profit organization that builds power for immigration and education justice” and CTUL “an organization of workers and for workers, committed to securing fair working conditions for present and future generations.”

Unicorn Riot was live for this action.

These protests used an important tactic that all activists should consider — go where the media will already be. Minneapolis drew a lot of media to cover the Super Bowl and advocates for racial and economic justice were smart to use the opportunity to get their views heard.