Above Photo: By the author for Triad City Beat.

The Renaissance Community Co-op is the first of its kind in the nation, opened after 20 years of failed attempts to woo chains to the neighborhood.

When Eleanor Graves moved into her home at the northeast edge of Greensboro, North Carolina, the neighborhood was shifting.

“This home had belonged to a white family,” said Graves, a Black woman who previously lived one county east. “I fell in love with the house, even though I missed Alamance County.”

It was the early 1980s, and white residents were leaving the vicinity en masse. Homeowners who couldn’t sell started renting their houses, she said, and within about five years, almost all of the white residents had fled.

Graves—who held “a really good management job” at a telephone company—liked her new home. She lived near a branch library and a city rec center, and just one block from a Winn-Dixie grocery store. But the neighborhood started to decline, a trend Graves blames on a lack of public investment and renters who she said didn’t care as much about the community.

At the end of 1998, Winn-Dixie announced it would close the store, and other tenants of the shopping center quickly followed. Graves was more fortunate than many of her neighbors—she had a car, and could drive several miles to buy groceries for herself and her daughter. Plenty of residents had to rely on the city’s limited bus system, while others hitched rides or made do with minimal selections at gas stations and similar stores.

It would take nearly 20 years for a grocery store to fill in the gap. After decades of failed attempts to woo another chain, residents decided to create one themselves, opening a resident-owned cooperative grocery in the former food desert in late 2016. The Renaissance Community Co-op is the first of its kind in the nation, and residents like Graves made it possible.

When the Winn-Dixie closed, locals swiftly formed an organization called Concerned Citizens of Northeast Greensboro to recruit a chain grocer in its place. Driven in part by community advocate Goldie Wells—now the city council representative for the overwhelmingly Black district—the group galvanized the surrounding community to the cause. But about 10 years later, the neighborhood still lacked a grocery, and Concerned Citizens pivoted its focus to fighting the reopening of a nearby landfill.

The day the landfill deal died, activists rallied outside city hall to celebrate. Seasoned leftists Marnie Thompson and Ed Whitfield were there, playing with radical drum corps Cakalak Thunder. As residents celebrated around them, the duo approached Goldie Wells. Northeast Greensboro had built some serious muscle in the landfill fight, Thompson remembers saying as she leaned over the huge drum strapped around her. Now that Wells’ group could return its focus to a grocery store, why not flex that muscle and build their own? 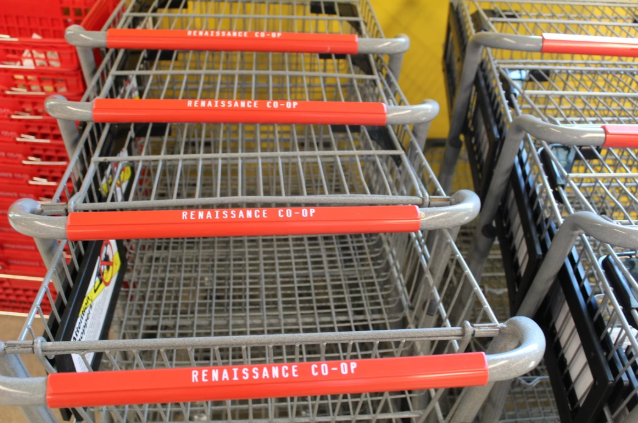 The idea hadn’t come out of nowhere. Thompson and Whitfield ran the Fund for Democratic Communities, a small foundation focused on economic democracy and cooperatives. F4DC, as it’s known, had been connecting with co-ops throughout the South, and holding local educational workshops to broaden awareness about the model they see as a path towards “democratizing wealth.”

Wells and other community members signed on. Eleanor Graves—who hadn’t been actively involved in organizing against the landfill—was among them.

“For me, it was very personal,” she said. “I had seen the neighborhood go from probably lower middle-class to low-income neighborhood. I was very interested in doing whatever I could to stop my neighborhood from further deterioration.”

She hadn’t done anything like this before, and didn’t know much about co-ops. And she wasn’t alone. Most residents who lived near what was then called the Bessemer Shopping Center had no clue what a cooperative was. But they knew they were tired of waiting for a corporation to come in and save them, or for the city to broker a deal to revive the strip.

“To me, the city of Greensboro totally ignored east Greensboro when it came to development,” Graves said, echoing a sentiment common among residents of the city’s predominantly Black east side. “This is for me and my community, my family, to show that we can do these things. We can make our own futures.”

Thompson’s Fund 4 Democratic Communities ponied up substantial funds to support the co-op grocery’s development, but she is quick to credit community buy-in for the store’s success. She recounted a story about a planning meeting in 2012 where resident Sadie Blue said, “If we’re serious about this, we need to pony up,” and threw a $20 bill on the table. Everyone started tossing bills in. Blue would become the co-op’s first official owner. Others slowly joined, some of them bringing envelopes with five $1 bills at a time to co-op meetings, making small but steady payments on their $100 memberships.

Anyone making active payments on their ownership is considered a full voting owner, Thompson said. While not all of the owners live in the immediate vicinity, that’s its base. Her story illustrates part of the main reason Thompson and others pushed for a cooperative structure.

“It is owned by the community so it’s never going to pick up and go somewhere else chasing a higher [return on investment],” Thompson said. “This community owns this store. If it owns this store, what else can it own and direct in its economic future?”

Thompson said another chain did a market study for the same area that showed the location would be profitable. But execs realized that it could cannibalize business at one of its other stores in the city—where residents had been trained to drive or take the bus—and so Thompson said they determined it wasn’t worth it. Other businesses periodically showed interest, but nothing materialized.

For Graves, part of the draw of a cooperative model is community control. She felt listened to in the planning process, and deepened her involvement. When the budding organization started to form its own board, she decided to run, winning a seat. Slowly, her community pushed forward.

In late 2016, with backing from a variety of lenders and investors including churches, the city, foundations, and others—as well as about 1,000 member-owners—the Renaissance Community Co-op opened.

Renaissance isn’t like other cooperative grocery stores. For starters, it isn’t designed to provide natural and organic food, though it does sell some of both. Instead it’s built to fit a much more basic need, providing a full-service grocery store in a longstanding food desert. They hired the vast majority of staff from the immediate area, Thompson said. Graves added that it’s an added benefit that they’ve been able to create jobs that pay above minimum wage for her community.

“I am just so tickled every time I go in there,” Graves said. “It’s looking great.”

When the Renaissance co-op was still in the planning stages, Thompson said they were repeatedly told it wouldn’t be possible. Co-op groceries just don’t open in predominantly Black, low-income neighborhoods, they were told.

“When we were getting started, we reached into the food co-op world for assistance, and there was a really long, painful period of being dissed by that community,” Thompson said.

Detractors basically said the community was “too poor, too Black, and too dumb to do this,” Thompson said, though it wasn’t presented as bluntly as she worded it. Eventually though, they were able to convince people in the co-op world that it was possible, she said. And now they’re proving it.

Not that there haven’t been challenges. Their financial projections didn’t pan out, Thompson said, and F4DC has been more involved since the store’s opening than expected. Nicole Gentles, the co-op’s marketing & community partnerships associate, said they’re still struggling to get the word out, adding that it doesn’t help that the store’s name doesn’t include “grocery” or “food.” More than 1,000 people shop there every week, Thompson said, but they need to triple that to make it more financially viable.

A tornado earlier this year cut out the store’s power, and they had to throw out thousands of dollars-worth of food. It forced Graves to do the bulk of her grocery shopping elsewhere for a while, and she worried about the co-op’s future. But now, she’s hopeful. 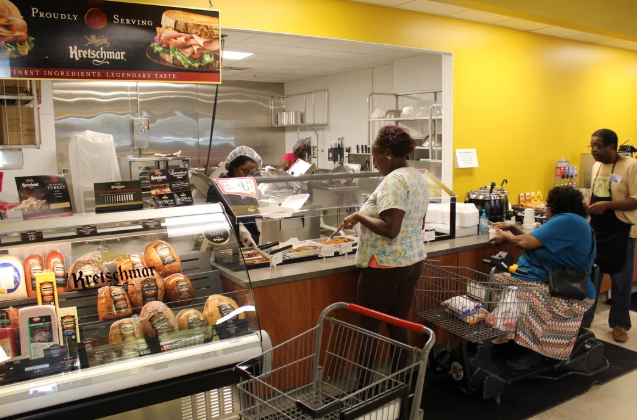 “I feel like we’re finally getting to a place where we’re beginning to flourish,” Graves said.

Gentles sees reason to be optimistic, too. One reason: more businesses are moving into the renamed Renaissance Shopping Center, including a bank, a primary care clinic, and a personal training gym. Plans for an event space and a restaurant are in the works, she said.

With more marketing and outreach, Thompson believes the co-op can succeed.

“It’s happening, we just don’t have the customer base yet,” she said.

As far as the Renaissance Community Co-op team knows, they’re the only grocery cooperative of the kind in the country. Similar plans for a Detroit People’s Food Co-op precede them, Thompson said, but efforts there haven’t come to fruition yet. Some existing food cooperatives have tried to address food insecurity by opening satellite locations, but Thompson said they’re price points tend to be too high and they aren’t community-rooted in the same way.

People around the country are eager to follow Renaissance’s DIY example, Gentles said. A small group in neighboring Winston-Salem is looking into replicating the model, and Gentles said people from about a dozen places including Rhode Island and Georgia have reached out about creating their own. To her, the reason is obvious.

“Access to fresh food and vegetables and meats should not be a privilege,” she said. “This offers a chance for people to have a real say in what happens when it comes to food security.”

Graves loves that they’re inspiring people in other cities to follow suit. She hopes that eventually the Renaissance co-op can expand with a second location, noting that her mom lives in a food desert in a nearby town. It’s been an empowering process to build this store, Graves said, and while it’s also been challenging, she hopes more people will organize the way her neighborhood has.

“I think it’s very, very important for any community that feels like their local government has really overlooked them to consider what we can do for ourselves,” she said.