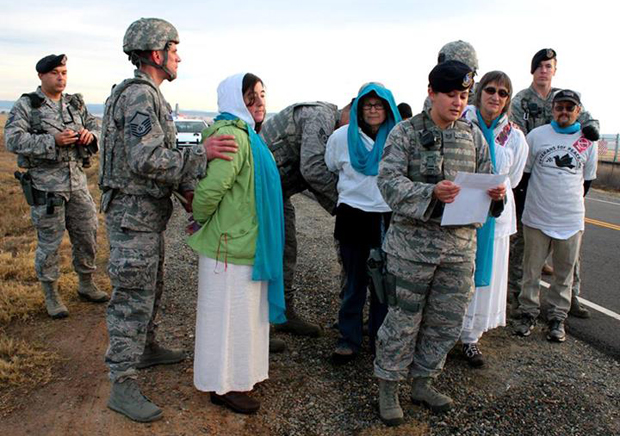 Sign below to support the Beale AFB anti-drone protestors.

As you are aware, a group of non-violent activists has been protesting drone warfare and the militarization of our world at Beale Air Force for the last three years. We come monthly because of our deep concerns about our country participating in our illegal “war on terror”, bombing people in countries with which we are not at war, killing civilians who have not committed a crime against our country, who have not been apprehended, tried, or convicted. Thousands have been simply killed, or to put it stronger, murdered, with no due process. In addition to the thousands killed, many more have had their lives destroyed by serious injuries. These human beings include grandparents, children, mothers, men who simply look to be of military age. Some were meeting for prayer, studying at school, gathering firewood, working in the garden, and even sleeping in their homes. The fact that drones frequently attack people engaged in peaceful activities suddenly without warning helps to terrorize entire communities 24/7 even in the absence of actual drone attacks! Thousands have actually committed suicide because of these pressures and grief.

Our group of protesters is also saddened and concerned about the suffering of our own troops, who are coming home with high rates of PTSD, and whose suicides outnumber those killed in combat in our “war on terror”.

As conscious human beings, we are called to act to try to express our outrage that our country, including our military and CIA are behaving in such a manner. We act in hope that we can make a difference, that something we do will open some eyes, enlighten some and cause a shift in mass public awareness. We must stand up, speak the truth, and represent those who cannot speak freely and safely, including the troops at Beale AFB.

In our peaceful efforts to make a difference, although most base personnel have been respectful of our vigil and occasional civil disobedience, we have come under assault by a few base personnel entering the base during rush hour on several occasions. Last spring one of our military veterans, representing Veterans for Peace, was run into by a car which drove through a blockade of protesters. He ended up being lifted onto the hood of a car, and was fortunate to receive only a minor injury to his elbow. That same day there were other close calls where a car zoomed close to someone on the shoulder of the road.

More recently, on November 26, another military veteran, holding his Veterans for Peace flag, was pushed by a car until he was forced to lean forward on its hood, as any other movement would have caused him to lose his footing. He was carried by the car about 100 feet, at which time the man in uniform driving the car stopped and allowed the veteran to back off the hood safely. We feel that the vet was extremely lucky to have avoided serious injury. We have photos of the incident and the vehicle license #.

In another incident that day, a car sped through our group nearly hitting someone and then nearly crashing head-on with a recycle truck. There have been other close calls by angry drivers, and we are asking for your support. Please convey to your personnel that aggressive actions against non-violent protesters are not acceptable.

We would like to express our thanks that the military police and security personnel on the base have most often interacted with us in a very professional and courteous manner over the past 3 years. More importantly, they have regularly communicated to us that they are concerned about our safety and that we should call on them for help when we need it. We are now calling for that assistance regarding an issue that has potential for a tragic outcome. Please let us know how you plan to address this serious issue. We would welcome an opportunity to discuss this matter further with you in person.

We thank you in advance for acting on this issue. We also look forward to hearing someday that Beale AFB will only participate in humanitarian missions that benefit people worldwide in need of help, and will be acting to heal, not destroy, our fragile planet.