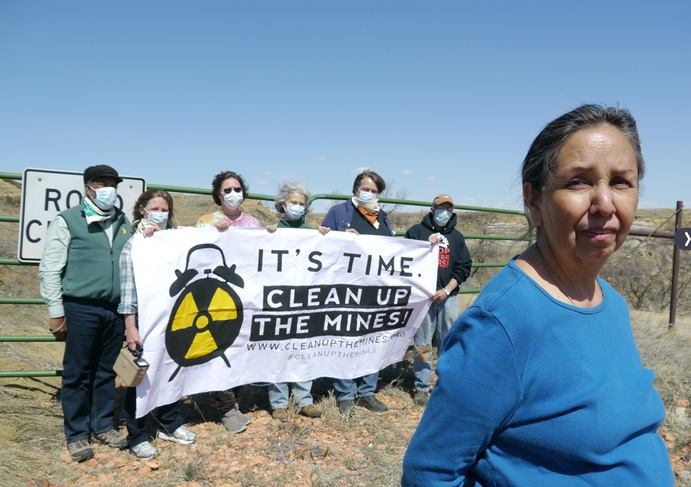 Support The Call To Clean Up The Mines

Above photo: The Clean Up The Mines team visits a large abandoned Uranium mine in Southwestern South Dakota. Charmaine White Face of Defenders of the Black Hills stands in the foreground. By Ellen Davidson.

Throughout the United States, but primarily in the Great Plains and the West, a silent polluter is responsible for cancers, birth defects and many diseases including kidney and autoimmune diseases. Yet, most people living in close proximity to these polluters are unaware of the danger.

These mines are the result of the great Uranium Rush, larger than the Gold Rush, but they are rarely talked about. Now the abandoned mines are ‘America’s Secret Fukushima‘, as we wrote in June, 2013. Radiation can’t be tasted, felt or smelled. It is an invisible pollutant. There is no safe dose.

In 1948, the Atomic Energy Commission stated that it would buy any Uranium that people had to sell. This unleashed a frenzy of mining for the next 25 to 30 years. People dug Uranium ore up on their land and brought it to buying stations in open bed trucks without knowledge of the health hazards. Most of the Uranium ore was on federal or tribal lands. Private corporations contracted to mine on those lands and employed workers throughout the 1950’s without advising the workers of the danger of radiation or providing protective gear even though the links between radiation and cancer were known at the time. Many of the workers were Native American. Some of them brought their families to the area around the mines where children played and meals were cooked as the workers blasted and hauled out the rocks.

The private corporations who operated the mines had no legal responsibility to clean up after they left. And so, for decades, the mines have been open scars upon the land continuing to pollute. There is no single registry of the locations of the mines, but from multiple sources, it is estimated that there are 15,000 of them. Some are close to national monuments like Mount Rushmore. Some are located in towns, near houses and schools. According to EPA data, ten million people live within 50 miles of a known abandoned Uranium mine.

Popular Resistance, in partnership with other groups and individuals, is part of the Clean Up The Mines! campaign that has been working to introduce legislation in Congress that would catalog the mines, require public education about the hazards of the mines and require cleanup of the mines using the highest standard to protect the air, land and water. Though legislation has been written, it continues to languish and has not been formally introduced.

That’s why we need you. We must build a loud voice from the grassroots demanding that leadership make this huge silent public health danger a high priority.

And for more information, visit CleanUpTheMines.org.