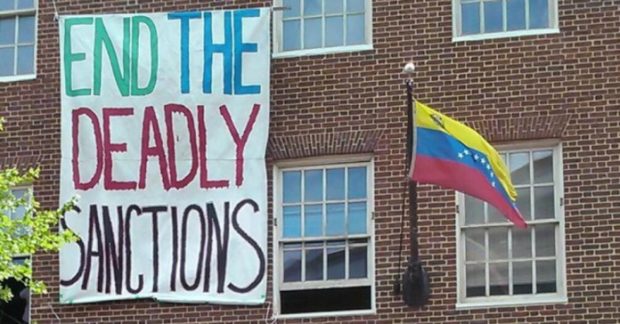 Above photo: Banner hanging on the Venezuelan Embassy in Washington, DC.

For decades the U.S. government and its European allies have been illegally using unilateral economic sanctions (“Unilateral Coercive Measures”) as a weapon of war and mass destruction to topple governments that do not submit to the U.S. and European states’ domination of their country. The main objective of these unilateral sanctions is to destroy those small countries’ economies and bring their people to their knees through mass starvation so they will be left with no choice but to revolt against their own government.

This criminal, anti-human policy of targeting defenseless populations, which is in clear violation of United Nations Charter and international law, has now become the new weapon of choice for these powerful states since they are faced with strong opposition from the majority their own population to the endless wars of occupation that they are already involved in. Through these illegal sanctions, these powerful states hope they can achieve their imperialistic goal of “regime change” and domination in a silent, calculated manner without arousing the wrath of their own and international public opinion.

According to some UN reports, there are currently over 33 countries (15 percent of all countries of the world) and dozens of non-state entities that are targeted by these illegal sanctions. Among them are Venezuela, Cuba, Nicaragua, Iran, Syria, Zimbabwe, Belarus, and many others, whose population are suffering from hunger, lack of medicine, homelessness and disruption of their educational system and other vital social services. Prior to the invasion of Iraq in 1991, fifteen years of U.S. economic sanctions led to the death of half a million Iraqi children. In Venezuela today, over 40,000 people have died as a result of illegal sanctions and the number is rising daily.

In response to these blatant criminal acts, which are nothing but crime against humanity, the Group of 77 countries + China is submitting a resolution to the General Assembly of the United Nations, which, among other measures:

2. Calls upon the international community to condemn and reject the imposition of the use of such measures as a means of political and economic coercion against developing countries …;

To read the full text of the draft resolution click here

We consider it our paramount responsibility to mobilize massive support for the passage of this resolution by the UN General Assembly. To this end, we have drafted a public letter of support for the resolution to be signed by a massive number of organizations and individuals in the U.S. and around the world to be delivered to the voting session of the UN Second Committee. We urge all defenders of peace and justice to sign this letter. We need to collect a large number of signatures in a short period to time. We request that you act urgently.

* To add the name of your organization, please CLICK HERE.

* To add your name as an individual, please CLICK HERE.

We, civil society organizations and advocates for peace and justice, write to express our support for the resolution introduced by the Group of 77 + China [Agenda Item 17 (a)] that:

2. Calls upon the international community to condemn and reject the imposition of the use of such measures as a means of political and economic coercion against developing countries …; (to read the full text of the draft resolution click here)

We recognize that unilateral coercive measures are being used to wage economic war and as tools for regime change efforts by the United States and its junior partners in violation of the United Nations Charter. These measures have devastating impacts on the countries that are targeted.

For example, Cuba, a country that has been under an economic blockade for over 60 years, reported this year that the blockade has cost their economy close to $1 trillion since its inception when devaluation of the US dollar compared to gold prices is taken into account. Recent reports find unilateral coercive measures have contributed to 4,000 deaths in North Korea over the past year and over 40,000 deaths in Venezuela in 2017 and 2018.

Economic warfare by the United States and its allies is increasing in both intensity and the number of countries that are impacted. This economic war harms those who are most vulnerable and who bear no responsibility for relations between countries.

We urge the United Nations General Assembly to support the proposed resolution cited above and to take all steps within its authority to end the use of unilateral coercive measures by any state, or a group of allied states, against another.

* To add the name of your organization, please CLICK HERE.

* To add your name as an individual, please CLICK HERE.