Above Photo: Tom Tingle/ The Republic

NOTE: This is another example of cultural genocide. The Supreme Court ruled that sacred sites are not important.

Arizona – The Hopi Tribe cannot claim special damage on land controlled by the Arizona Snowbowl ski resort, the Arizona Supreme Court ruled Thursday, all but ending an eight-year legal battle and ensuring the ski area can continue using machine-made snow on the state’s most popular slopes.

The Hopi Tribe’s lawsuit was originally about the machine-made snow. Its complaint alleged that Snowbowl’s use of treated wastewater to make the snow damaged the San Francisco Peaks, which the tribe considers sacred.

In Arizona, a private party can make a public nuisance claim only if it has suffered damage different from that of general public. Earlier this year, the Arizona Court of Appeals ruled that the Hopi Tribe could claim that Snowbowl’s use of treated wastewater to make its own snow did cause “a special injury” to the tribe’s cultural and religious traditions.

The Supreme Court, in a 5-2 decision, disagreed.

“Indeed, the Tribe’s graphic descriptions of reclaimed wastewater and its effects … strongly suggest that anyone and everyone who visits the Peaks, not just the Tribe, will suffer substantial environmental harm,” Justice John Pelander wrote in the court’s opinion.

That means the tribe cannot make a public nuisance claim.

The court also decided that environmental damage on culturally important public lands is not special injury. That ruling could have a ripple effect in Arizona, where over half the land is owned by the federal or state government.

Hopi Chairman Tim Nuvangyaoma said the tribe was disappointed with the ruling.

“As we have said before, while the use of treated wastewater to make snow may provide some commercial benefit to the ski resort, the long-term impact is immeasurable on the natural resources, shrines, and springs on the San Francisco Peaks, a sacred site for the Hopi,” he said.

“This has been a long fought battle, in many different forums, and through it all we had hope that justice would be done,” Nuvangyaoma said. “Unfortunately, we did not prevail.”

The Hopi, like many local tribes, consider the San Francisco Peaks sacred. Snowbowl’s use of the treated water, the tribe claimed in its 2010 complaint, has harmed the mountain and prevented the public — including tribal members — from enjoying the land. It also alleged that melted snow would contaminate the local water supply.

The San Francisco Peaks sit a few miles north of Flagstaff, and squarely in the center of Hopi religion and culture. The mountain is considered sacred, a home to centuries-old ceremonies and a target for tribal members’ prayers.

“We’re in a desert, and yet here’s a place that miraculously carries snow upon a mountain,” said Ed Kabotie, a Hopi artist and musician. “Now, to us, that represents spiritual virtue.”

Arizona Snowbowl sprawls across 777 acres — just 1 percent — of the San Francisco Peaks’ western slopes. The U.S. Forest Service manages the land and gives Snowbowl a special-use permit to operate there.

Local tribes have fought Snowbowl since its foundation, but first went to court in 1981, when the resort announced plans for massive expansion. The Hopi Tribe, among others, sued to block those plans, arguing that they would prevent their First Amendment right to practice their religion. The tribes lost that case in federal court.

Over the next two decades, the tribes continued to protest, but kept the issue out of the court.

Then came the snowmaking.

‘Shaking your fist at God’

Carving slopes and erecting lifts was bad enough, Kabotie said. But to create snow, to cover the mountain with man’s handiwork, was a direct affront. Kabotie called it “shaking your fist at God.”

More than 85 percent of the United States’ largest ski resorts rely on at least some artificial snow, a spokesperson for the National Ski Areas Association confirmed. They use the fake flakes to cover bald spots on the slopes, to add an extra layer of powder, or even to stay open when nothing falls from the sky. It’s the only way to add reliability to an unpredictable business.

Before Arizona Snowbowl started freezing its own snow, in 2012, the resort was at the mercy of nature. If snow fell, Snowbowl opened. If not, the gate stayed closed. Locals still shake their head at the memory of the year Snowbowl opened for just four days.

Environmental activists and local tribes have opposed snowmaking on the Peaks since before it began. In 2002, a decade before Snowbowl froze its first flakes, it made an agreement to buy treated wastewater from the city of Flagstaff and use it for snowmaking. The Forest Service approved of the deal.

Local tribes did not. They sued.

A federal court resolved the tribes’ claims in favor of the Forest Service, but the Hopi Tribe didn’t let the issue fade away. It filed another lawsuit in 2010. This time, the tribe claimed the wastewater was a public nuisance, because it contained leftover chemicals that hadn’t been filtered out.

Even trace amounts of those chemicals, Hopi and environmental advocates have long said, could damage the mountain. It’s unclear whether the effects could be reversed.

“I’m not sure,” Kabotie said. “I’ve been traumatized a number of times in my life, and I’ll never be the same. But I’m still me. We bear our scars, right? They heal. But we never heal the same way.”

In their dissent, Chief Justice Bales and Justice Bolick argued that the majority’s ruling “largely ignores the distinctive harms alleged by the Hopi” and undermined the very purpose of the public nuisance law.

“The majority fails to appreciate that the wastewater will affect the Hopi’s use and enjoyment of ancestral lands that have played a central role in Hopi culture and religion since before the Coconino National Forest was of concern to the broader public,” the dissenters wrote. 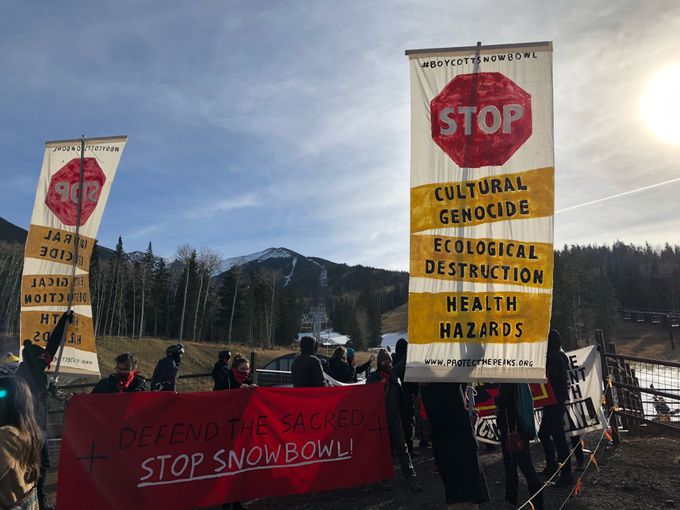