NOTE: The Popular Resistance podcast, Clearing the FOG, started being broadcast on Tuesday mornings at 9:00 am on WBAI 99.5 Pacifica Radio in New York City in early September. Yesterday morning, we received a message that the WBAI employees were fired and locked out of the station. The staff moved quickly to reverse that decision and brought it to the courts, which decided in the middle of the night to restore WBAI. Sadly, the hostile maneuver interrupted WBAI’s fund drive. We congratulate the staff for their hard work to restore local programing and we look forward to being heard on the New York airwaves again. – Margaret Flowers

Watch a video report by clicking on the image below: 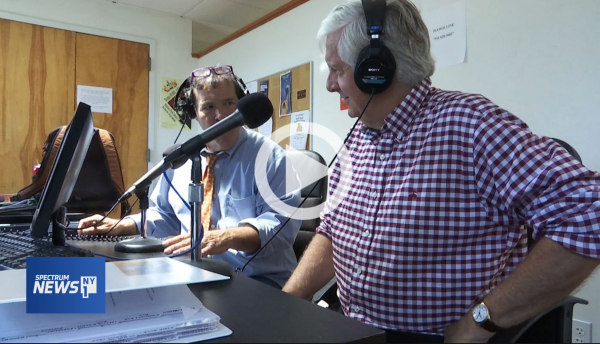 Berkeley-In the morning, a crew of Pacifica Foundation board members led by brand new IED John Vernile, locked out the staff at WBAI-FM in New York and then fired them all, told the landlord to rent the space to someone else, and started piping in content from the West Coast over mid-Manhattan. In the night, the Supreme Court of New York told them to stop it and restored WBAI’s facilities, equipment, studio space, employees and control over the airwaves.

If this feels to you like a flashback, well there’s a reason for that. Two decades ago, the Pacifica Foundation locked out employees at Berkeley’s KPFA and started piping in content from Texas. At that time, the nonprofit’s board was united in their desire to teach KPFA a lesson and extract the millions in license value. Not this time. At least half of Pacifica’s elected board wasn’t informed, had no idea. and never consented. That’s probably why Supreme Court judge Frank Nervo (at home and in his pajamas) called a halt to things. This is what he said.

The Supreme Court of the State of New York has issued a stay and temporary restraining order enjoining the Pacifica Foundation from 1. Seizing any property files or equipment from WBAI 2. Terminating any employees of WBAI 3. Preventing WBAI from broadcasting it’s regularly scheduled programming. 4. Interfering in the business or orderly administration of WBAI pursuant to Section 1315 of the NYC Not for Profit Code and the Pacifica Foundation bylaws until a hearing to be held on October 18th.

The WBAI takeover followed immediately upon the collapse of a proposed set of new bylaws presented by the same folks who attempted to lock out WBAI, namely the KPFA board faction formerly known as Concerned Listeners, before they were formerly known as Save KPFA and currently known as United for Independent Radio. For the bylaws amendment petition, the name used was “The Pacifica Restructuring Project“. They were joined by a few board members from Texas and Los Angeles. The petition to the members sought to install six hand-picked people as a new self-selecting board majority that would perpetuate itself indefinitely with broad powers to further change the bylaws. The petition, which aimed to install the six by January of 2020, relied on the existing national board to open a bylaws amendment period and call another election. The board deadlocked at 11-11, blocking the petition until next year, and the proponents resorted to trying to kick one of their opponents off the board, KPFA’s Tom Voorhees (an action which is still scheduled for October 26th at KPFA).

Denied their hand-picked six to rubber stamp their actions, the group simply decided to go ahead in secret with the attack on WBAI with no board sanction. This secrecy meant that a number of things that needed to happen, didn’t: no meet and confer with the union prior to laying off union staff, no advance notice to employees and programmers, no notice to the landlord, and no consultation with the lender who holds as collateral studio buildings in LA, Houston and Berkeley.

Whether it could possibly be considered a sober plan no matter how carefully carried out is another matter. The lockout interrupted a fund drive in process that would normally book around $300,000. Laid off employees get severance pay and failing to meet and confer prior to layoffs results in a trip to arbitration. It probably wasn’t cheap to find a lawyer and dispatch them to Judge Nervo’s house in the middle of the night to argue unsuccessfully against the TRO. A repeater station still needs to transmit and WBAI’s 4 Times Square transmitter costs $12K a month. With no fund drive apparatus or staff and a program schedule of re-runs, where does that money come from? It’s unlikely to be the NYC audience whose programs were all cancelled. An organization so desperately broke that it has to cannibalize its own radio station can’t fly the IED and at least three board members to NYC and put them up in hotels to do the dirty work. It doesn’t really add up. Most WBAI’ers concluded the end game is a sale of the station license for the tens of millions of dollars it will get on the open market as a commercially convertible license.

Besides its role as a cash cow to provide a windfall to other 4 stations, are the finances at WBAI really that bad or that much worse than the other stations? Once the predatory Empire State Building tower lease Pacifica stuck WBAI with was ended, the answer is not really that much worse. You don’t have to take my word for it. Here is a profit and loss statement for 2018-2019.

It shows an operating deficit of -$227,000 including the internal transfers that Pacifica calls “central services” which are not direct costs, but payments to the Pacifica Foundation itself to support the national office. We want to be clear that in the end, all of the Pacifica stations are going to have to find a way to break even or the long-term prognosis is bleak. However, if every Pacifica unit that ran an operating deficit of -$227,000 or more was shut down, all the employees fired and the station turned into a repeater with every single local program cancelled, then the treatment would have happened to:

Only KPFT in Houston would be left standing.

In another ironic twist, the WBAI signal area in 2019 provided a generous bequest from the estate of a former WBAI fan of $583,500. A nice chunk of change that was left to the national foundation which promptly ratcheted up their annual spending from $1.82 million in 2018 to $2.49 million in 2019, an increase of $670,000 powered by that estate gift. Once it was all spent by national, they moved to shut WBAI down.

So what now? The Pacifica Foundation has been silent since the TRO was issued. WBAI staff and programmers are meeting tomorrow to get themselves back up and running. WBAI members should support the station right now and show it with your words, emails and dollars. (Mail them checks. The Pacifica Foundation disabled the online donations system).  In other signal areas, please speak up. Your delegates are elected and you put them there to represent you so can tell them what to do and what not to do in your name. Each station has instructions for contacting the local station board on the website and they meet in public once a month. Democratic Socialists of America, who have a program on WBAI, are mobilizing to support the station in New York. In Berkeley, which is the most responsible for the attack on WBAI, there should be accountability with the listeners who elected these delegates.

Since this all just happened on 10-7-2019, plans are still being developed, but we are told there may be a press conference on October 8 at 9am at KPFA and speakouts are expected at the planned local station board meetings on October 19th and October 26th here in Berkeley. Other signal areas will likely also arrange some events. To be clear, about the last thing in the world our listener dollars should be spent on is Pacifica fighting WBAI in court. None of that makes the stations stronger, better, more engaging, more technically sophisticated, more politically pointed or more culturally rich. It’s our responsibility to back this misguided board up and make them support our stations, not destroy them.

If you value being kept up to speed on Pacifica Radio news via this newsletter, you can make a little contribution to keep Pacifica in Exile publishing . Donations are secure, but not tax-deductible. (Scroll down to the donation icon).

Started in 1946 by conscientious objector Lew Hill, Pacifica’s storied history includes impounded program tapes for a 1954 on-air discussion of marijuana, broadcasting the Seymour Hersh revelations of the My Lai massacre, bombings by the Ku Klux Klan, going to jail rather than turning over the Patty Hearst tapes to the FBI, and Supreme Court cases including the 1984 decision that noncommercial broadcasters have the constitutional right to editorialize, and the Seven Dirty Words ruling following George Carlin’s incendiary performances on WBAI. Pacifica Foundation Radio operates noncommercial radio stations in New York, Washington, Houston, Los Angeles, and the San Francisco Bay Area, and syndicates content to over 180 affiliates. It invented listener-sponsored radio.