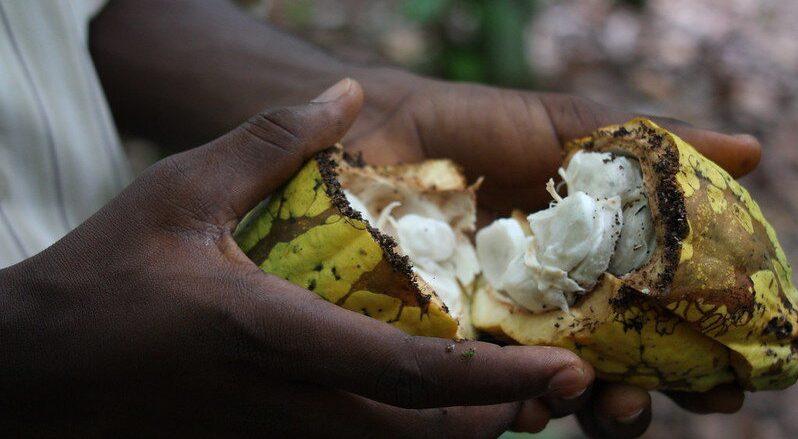 Last Tuesday, the Supreme Court heard arguments about whether the world’s largest cocoa corporations are liable for child slavery in their supply chains. For 15 years, six citizens of Mali who were trafficked as children to work on cocoa farms have sought legal damages from Cargill and Nestle USA under a 240-year-old anti-piracy law.

The plaintiffs’ attorney told the court that the corporations “maintain a system of child slavery and forced labor in their Ivory Coast supply chain as a matter of corporate policy to gain a competitive advantage in the U.S. market.” Cargill and Nestle deny this charge, saying that they work to avoid child slavery in their supply chains, not aid and abet it. Those who directly perpetrate forced child labor – farmers and human traffickers, in other words – should be held liable, the defendants argue.

The case raises bigger questions about corporate power and accountability in global supply chains. While large corporations do not direct farmers to use child labor, the low prices they offer for cocoa keep farmers in poverty and leave them with few desperate avenues for survival. Large chocolate processors and manufacturers have the wealth and ability to pay farmers more and better monitor their supply chains, but they make more money by not doing so. Instead, the poorest and least powerful players – the farmers – bear most the risks and responsibilities for improving farming practices.

This lawsuit is one attempt to redistribute responsibility and seek justice, but advocates say it’s time for new rules and enforcement measures. “If you need a 240-year-old law [to] try and claim that multinationals might be partly responsible for slavery in their supply chain … then you really need to go back to the drawing board,” says Antonie Fountain, managing director of the Voice Network, an umbrella group of cocoa reform NGOs. “We need proper regulations that understand what a multinational corporation is and how corporations should be held accountable.”

More than 80% of the bulk or commodity cocoa that major chocolate traders and manufacturers buy comes from just four West African countries, with Cote D’Ivoire and Ghana producing 60% of all cocoa globally. This market comprises hundreds of thousands of poor smallholder farmers and a handful of giant multinational corporations. Just five international processors and traders purchase roughly half of West African cocoa, and six chocolate companies use 40% of the world’s cocoa.

Chocolate manufacturers reap large profits while West African cocoa farmers live on dollars a day. Nestle’s 2019 sales were roughly the size of Ghana and Cote D’Ivoire’s GDPs combined. While the corporation has spent some $250 million on child labor remediation over the past decade, in this same period Nestle spent a whopping $46 billion buying back its own stock to benefit shareholders. All while the median West African cocoa farmer lives well below the global poverty line, making just $1,900 per year.

These inequities between wealthy, largely European and American companies and small farmers in the global south go far back, argues Anna Canning, campaign manager for the Fair World Project. “The fundamentals of the cocoa trade are anchored in colonial dynamics,” Canning says. “Forced labor and exploitation are baked into the entire processing and pricing structure that we have for cocoa.”

Most West African child laborers work on their parents’ cocoa farms, because farming families cannot afford to pay for school expenses or hired labor. A smaller fraction are trafficking victims from surrounding countries, such as the plaintiffs, many of whom are not permitted to return home, experience threats and physical violence, and never receive any payment.

In addition to missing school, dangerous work with machetes and agrichemicals threatens child cocoa workers’ long-term health and development. Child labor is illegal in all West African cocoa-producing countries, yet the phenomenon has only grown in the recent decades. In 2009, there were an estimated 1.8 million children working in West African cocoa cultivation; by 2015, there were an estimated 2.1 million.

During this same time period, chocolate corporations made several promises to eradicate child labor and slavery from their supply chains, but all these promises have failed. In 2001, the U.S. House of Representatives passed former Rep. Eliot Engel’s bill requiring corporations to label chocolate made with child labor. In response, the Ivory Coast government and major chocolate corporations – including Nestle – signed the Harkin-Engle Protocol, which committed them to create child labor labels and eradicate child labor entirely by 2005, in order to avoid federal regulation. Engel’s proposed law never passed the Senate, and corporations never met these ambitious goals, nor new weaker commitments set for 2007, 2010, and 2020.

This is not to say that corporations have done nothing. Canning notes that Nestle in 2012 implemented “one of the better child labor monitoring and remediating systems in the industry,” and, according to corporate reports, this system helped half of some 7,000 identified children stop doing hazardous work. But promises to label products are largely off the table, Nestle can still only trace 44% of its cocoa to the farmer coop level, and child labor throughout the West African cocoa industry is on the rise.

Because such corporate programs are voluntary, chocolate corporations face no meaningful consequence for unfulfilled commitments. Meanwhile, the bulk of the costs for adhering to improved labor and environmental practices and consequences for noncompliance, such as losing a third-party certification and associated premiums, falls on farmers. “I think that’s passing the buck from the people who have the most power in the supply chain to the people who have the least,” says Canning.

Absent modern regulations, lawyers since the 1980s have resurrected a 1789 anti-piracy law, the Alien Torts Statute (ATS), to seek justice for international human rights violations in cocoa and other industries. While modern courts have ruled that individuals can be held liable for violating “universal” norms abroad under the ATS, they have been split about whether liability extends to corporations. Nestle and Cargill’s petition to throw out their ATS charges before the Supreme Court may settle this debate.

At last week’s oral argument, Justice Elena Kagan questioned the corporations’ claim to immunity. “If you could bring a suit against 10 slaveholders, [then] when those 10 slaveholders form a corporation, why can’t you bring a suit against the corporation?” she asked. Justice Samuel Alito echoed this view, saying the petitioners’ arguments for immunity abroad “lead to results that are pretty hard to take.” However, Judges also questioned whether the trafficked childrens’ lawyers could really claim that Cargill and Nestle “aided and abetted” their enslavement by buying cocoa.

Even if the court does side with the plaintiffs, Fountain argues that the ATS is an outdated and imperfect statute for holding corporations to account for human rights violations. In recent years, the European Union has explored due diligence laws, which would create systems for monitoring, identifying, and remediating human rights violations across all different types of global supply chains. They would also establish meaningful enforcement mechanisms and create “commensurate and persuasive” penalties for multinationals’ violations. Even some chocolate corporations have come out in support of due diligence regulations.

These systems may create new incentives for corporations to root out child labor in their supply chains, but there still remains the massive question: how? While many in the cocoa industry agree on the need for increased transparency and traceability, experts disagree about whether and how cocoa buyers can address the root cause of child labor: farmer poverty.

Notably, Nestle and other large manufacturers never propose paying more for cocoa (that is, not beyond a modest premium for a certified product). A report by the Voice Network estimates that the farm gate price for cocoa in Ghana and Cote d’Ivoire needs to be roughly 75% higher (up from about $1,800 per metric ton to more than $3,100) in order for farmers to earn a living income.

Instead, corporations and some economists contend that increasing farmer productivity is the key to lifting West African cocoa household incomes. But farmers will need to spend more on better trees or new farming techniques. “We don’t see data that can properly communicate that there’s a return on investment for increased productivity,” says Fountain. Further, if all farmers boost their yield, that could exacerbate the cocoa oversupply that’s currently driving down prices, Fountain adds.

Canning, Fountain, and others argue that corporations need to first pay more for cocoa to reflect the costs of production. Without a living income for farmers, no amount of tracking or building schools can counteract the incentives to use child labor. “We need to acknowledge that a living income for farmers is a human right and a given,” says Canning. “It’s not a finish, it’s not the silver bullet that is going to fix 500 years of systemic inequity and under-investment, but it’s a start.”

Cocoa producing countries agree. Just last year, Ghana and Cote D’Ivoire took steps to charge a fixed “living income differential” of $400 on every ton of cocoa. Last week, the countries canceled all of Hershey’s sustainability programs in the region after the corporation tried to avoid this fee by buying some 30,000 tons of stockpiled cocoa off the commodities exchange instead of from the Ghana and Cote D’Ivoire cocoa board. Child labor advocates welcome the countries’ intervention, though it remains to be seen how much of this premium will make it to farmers. Further, the pay bump only puts cocoa prices back to where they were a few years ago, which is still well below estimates of a living income for farmers.

Cocoa manufacturers and traders say that they cannot unilaterally begin to pay more for cocoa, that it would interfere with markets and put them at a competitive disadvantage. Fountain disagrees. “I am OK with the free market doing its proper job when there are countervailing powers creating the right price,” he says. “That theory falls to hell when you have millions of farmers with no market power at all.”

He argues that large companies can afford to pay farmers more, with no cost or minimal costs to consumers. For instance, the Ferrero Rocher company paid their family owners a $779 million dividend at the start of 2020. Had the corporation directly given every single cocoa household it sources from a living income of $5,500 for the year, the corporation still could have paid the Ferrero family $233 million, Fountain estimates.