Surge In Lobbying Opposed To Medicare For All

NOTE: The report below is helpful for understanding opposition to National Improved Medicare for All. We would not characterize the Senate bill introduced by Senator Sanders as a strong bill. It has serious flaws, such as containing Accountable Care Organizations, which shift the risk of the costs of care onto doctors and lead to restrictions of care and discrimination, unproven payment schemes and a long, complicated transition, among other flaws. This review of the weaknesses of the previous Sanders bill pertains to the new one, as very little has changed except that coverage of longterm care services (not residential costs) was added.  – Margaret Flowers

With Democrats in control of the U.S. House of Representatives, a significant number of U.S. senators co-sponsoring the strongest Medicare for All legislation ever introduced in the Senate, and powerful polling in support of the proposal, single-payer health care is at the center of the public debate like never before.

The debate over Medicare for All has reached a fever pitch. For decades, single-payer health care was considered a quixotic, fringe proposal.[1]However, the tide appears to be turning.

At present, 14 senators have co-sponsored[2] the Medicare for All Act of 2019 introduced in the U.S. Senate by Sen. Bernie Sanders (I-Vt.). The Medicare for All bill under consideration in the U.S. House of Representatives has 112 Democratic co-sponsors. Single-payer legislation at the state level is being considered in at least 18 states,[3] and Public Citizen is part of a national partnership seeking to pass Medicare for All resolutions in local communities.

The ramp up of lobbying against single-payer proposals is validation that powerful health care interests see Medicare for All as a legitimate threat.

The Spike in Lobbying on Medicare for All

The number of organizations hiring lobbyists to work on Medicare for All rose sharply over the one-year period between the first quarters of 2018 and 2019.

This likely is at least partially due to the 2018 midterm elections. Lobbying on the issue increased greatly heading into 2018’s third and fourth quarters. We found an even larger spike in the first quarter of 2019. This may be because the election resulted in a newly minted Democratic House majority, including many new arrivals who ran on expanding access to health care, and Medicare for All, specifically.[4] [See Figures 1 and 2] 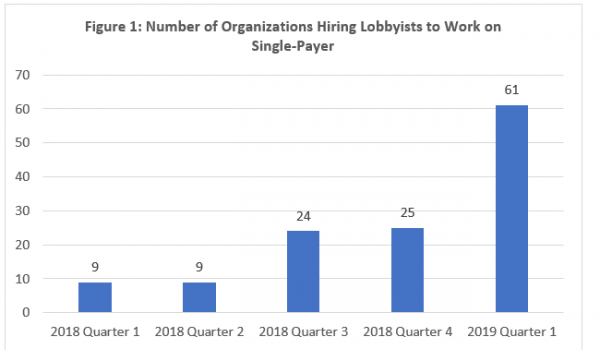 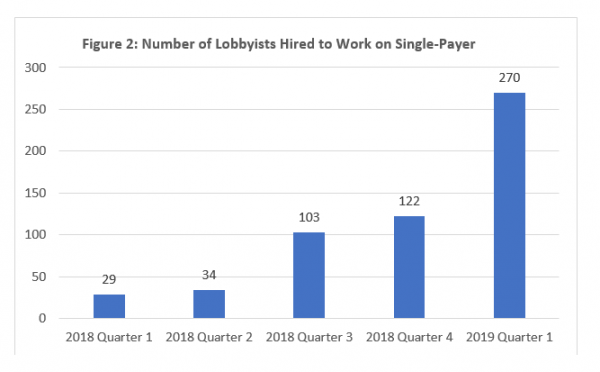 TABLE 1: GROUPS HIRING THE MOST LOBBYISTS ON MEDICARE FOR ALL IN Q1 2019

The new entrants represent the biggest names and industries in health care. These include representatives of insurance companies, including Allstate, Blue Cross Blue Shield (including state-specific associations), and the Kaiser Foundation Health Plans; the pharmaceutical industry, including the Pharmaceutical Research and Manufacturers of America (PhRMA), the Biotechnology Innovation Organization, and GlaxoSmithKline; and hospitals, including the Federation of American Hospitals, the American Hospital Association, and the Hospital Corporation of America. [See Appendices I and II]

While the data indicate a substantial rise in lobbying against Medicare for All through 2019’s first quarter, there is reason to expect that this trend will only continue. In particular, it is notable that some of the most resourced and powerful forces in American politics – the U.S. Chamber of Commerce (Chamber) and the Koch brothers’ network of politically active nonprofits and conservative libertarian donors – have now thrown their hats into the ring. Furthermore, establishment GOP-linked groups like Karl Rove’s One Nation and coalitions of health care interests have launched initiatives against Medicare for All.

The U.S. Chamber of Commerce

This January, during the annual State of American Business Address, Chamber CEO Thomas J. Donohue promised that the Chamber was dedicated to using “all of our resources” toward lobbying against single-payer health care.[15] As the largest lobbying group in the country,[16] those resources are certain to be vast. As shown in Table 1, the Chamber devoted the second-highest number of lobbyists to opposing Medicare for All in the first quarter of 2019.

The Coalition Against Socialized Medicine

Then there are the Koch brothers, known for their massive web[17] of connections with conservative and libertarian advocacy groups. In characteristic fashion, the Kochs’ efforts to oppose Medicare for All have been shadowy and diffuse across many organizations. The Coalition Against Socialized Medicine (CASM) has made it a core mission to defeat Medicare for All proposals.[18] The Coalition consists of[19] the Koch-founded Freedom Works, as well as other groups the Kochs have funded,[20] like Heritage Action for America and the Club for Growth, and groups with close ties to the Kochs like the American Conservative Union,[21] Citizens Against Government Waste[22] and the National Taxpayers Union.[23]

CASM has been waging a propaganda campaign against Medicare for All, using the term “socialism” as a boogeyman to stir up fears of single-payer health care. Matt Schlapp, chairman of the American Conservative Union, has claimed that Medicare for All would “subject all American patients to the types of ineffective socialized medicine systems that have plagued European and socialist countries for decades.”[24] The United States could benefit by catching the plague that Schlapp described. Those European countries achieve better health results that we do in the United States and spend much less on their health care.[25]

Establishment GOP-linked groups have begun to take aim at Medicare for All. One Nation, an advocacy group founded by Karl Rove and his colleagues “as a conduit for anonymous, political money,” in the words of the Center for Responsive Politics,[26] has now taken aim at Medicare for All. The organization has ties to the GOP establishment. Its president is Steven Law – former chief of staff to Senate Majority Leader Mitch McConnell (R-Ky.) and current president of the Senate Leadership Fund,[27] a super PAC that is essentially operated by the GOP Senate leadership.

One Nation debuted in 2015 with a $2 million ad campaign promoting what it called a “congressional consensus on Medicare”[28] that aimed to replace the Affordable Care Act.[29] Now, One Nation is waging a $4 million advertising campaign against single-payer health care meant to air around Democratic presidential primary debates.[30]

Finally, there’s the Partnership for America’s Health Care Future (PAHCF), a coalition of well-funded groups in health care industries including the Federation of American Hospitals, the American Medical Association, the Biotechnology Innovation Organization, Pharmaceutical Research and Manufacturers of America (PhRMA), America’s Health Insurance Plans (AHIP), and the Blue Cross Blue Shield Association.[31] PAHCF has unleashed what The New York Times calls “a daily fusillade of digital advertising, videos and Twitter posts”[32] deriding Medicare for All as excessively expensive and bureaucratized.

While PAHCF had not yet begun lobbying as of 2019’s first quarter, the lobbying firm Forbes-Tate did register as a new client for the Partnership, listing five of its staffers who are expected to act as lobbyists on its behalf.[33] Disclosure forms from the remaining periods of 2019 may indicate that these Forbes-Tate lobbyists have indeed begun to lobby for PAHCF, and/or that PAHCF has begun to conduct in-house lobbying. Regardless, the member organizations’ individual lobbying is already massive; six of the top seven hirers of lobbyists on Medicare for All, as listed in Table 1Table 1, are member organizations – and all are opposed to the policy.

In an op-ed[34] for Buzzfeed in May, U.S. Sen. Bernie Sanders (I-Vt.) accused PAHCF of being a “front group” of industry actors with a financial interest in maintaining the status quo using “deceptive ads” in order “to try to persuade legislators to oppose Medicare for All, or divide us and confuse us with weaker proposals.” The senator went on to enumerate the massive financial resources these groups have spent on lobbying and executive compensation, around $1.7 billion for the 65 highest health care CEOs,[35] and around $440 million for the top 25 highest-paid CEOs in the pharmaceutical industry.[36] Clearly, PAHCF’s member organizations reap massive profits from private health care, and they do not intend to give up those profits.

The dramatic increase in lobbying against Medicare for all shows that its opponents view it as a politically viable threat. Those who profit from our broken health system are putting up the most money.

It remains to be seen how successful these efforts will be. While the trade groups, conservative activist organizations and for-profit industry interests that oppose Medicare for All wield a great deal of power and resources, the majority of the public supports Medicare for All.[37]

The results of the 2018 election and the energetic ongoing efforts to adopt local Medicare for All resolutions show that the people power demanding this policy is growing rapidly. Further, recent hearings in the House of Representatives indicate that our policymakers are listening to the fact that health care is the number one issue for voters.[38] The momentum is so powerful that even the health care sector’s most well-funded lobbying organizations may be unable to stop it. The only thing that’s certain is that they’ll make every effort to do so.

The data for this report were gathered via the U.S. House of Representatives’ federal lobbying disclosure database. Using the search-terms “single-payer,” “Medicare for All,” the relevant House and Senate legislation, and all permutations of those terms by grammar and punctuation, groups were identified as having deployed lobbyists to work on “single-payer” / “Medicare for All” as an issue (often in addition to other issues). Only those lobbyists whose names were listed in the section of lobbying disclosure forms including one of those search terms as a lobbying issue were counted.

APPENDIX I: REPORTED FEDERAL LOBBYING ON SINGLE-PAYER / MEDICARE FOR ALL, QUARTER 1, 2018

[4] Nicole Gaudiano and Maureen Groppe, Democrats back Medicare for all in about half of House races they’re contesting, USA Today (Oct. 23, 2018), http://bit.ly/2XwHCEC.

[6] U.S. Chamber Letter to the Senate Opposing Medicare for All and Medicare Buy-In Proposals, U.S. Chamber of Commerce (March 18, 2019), https://uscham.com/2FpxxPB.

[12] Competing to Win: Health Care in Focus, National Association of Manufacturers (May 2019), http://bit.ly/31KmDxw.

[28] One Nation Launches With Ad Blitz Promoting Congressional Consensus on Medicare, One Nation (May 12, 2019), http://bit.ly/2IYnSk1.

[33] Forbes-Tate registration to lobby on behalf of Partnership for America’s Health Care Future, filed with the secretary of the Senate (effective date April 1, 2019), http://bit.ly/2IXR7DO.