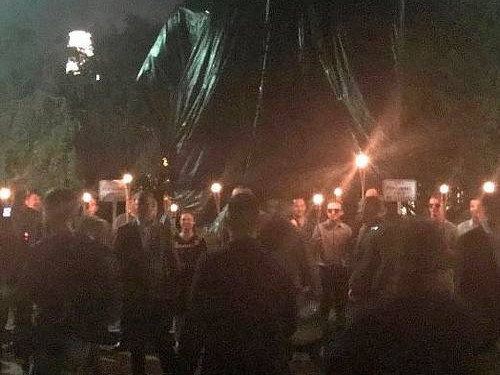 Less than two months after violence broke out at the “Unite the Right” rally in Charlottesville, Virginia, white supremacists returned to Emancipation Park on Saturday evening to demonstrate in support of Confederate statues.

The rally in early August was purportedly organized to protest the removal of a statue of Confederate soldier Robert E. Lee from downtown Charlottesville. Virginia Gov. Terry McAuliffe (D) declared a state of emergency after the white supremacists clashed violently with counterprotesters, injuring at least 35 people and killing 32-year-old paralegal Heather Heyer.

On Saturday, white nationalist leader Richard Spencer led a group holding torches to the park and livestreamed the rally from his Twitter account. The images were reminiscent of the group’s previous rally in the city, when they held tiki torches and chanted “Blood and soil” as they marched.

HAPPENING NOW: @RichardBSpencer & white nationalist supporters are back with their torches in front of Lee statue in #Charlottesville. pic.twitter.com/CwVhxpN7r8 — Matt Talhelm (@MattTalhelm) October 7, 2017

The governor responded to the rally Saturday evening on Twitter.

The group sang the Confederate Civil War song “I Wish I Was In Dixie Land,” and chanted phrases like “the South will rise again” and “Russia is our friend.”

Spencer delivered a speech filled with his familiar rhetoric, and he claimed that the U.S. was founded by what he calls “white culture.”

“We define this country, not anyone else,” Spencer told his supporters.

The event brought out about three dozen white nationalists, reported NBC 29′s Matt Talhelm, who also said there was police presence at the rally.

The group disbanded after Spencer’s speech. “We will be back,” they chanted Spencer later tweeted a video proclaiming the event a success.

“We came, we triggered, we left,” he said, adding that he thought the “flash mob” model should be repeated in the future.