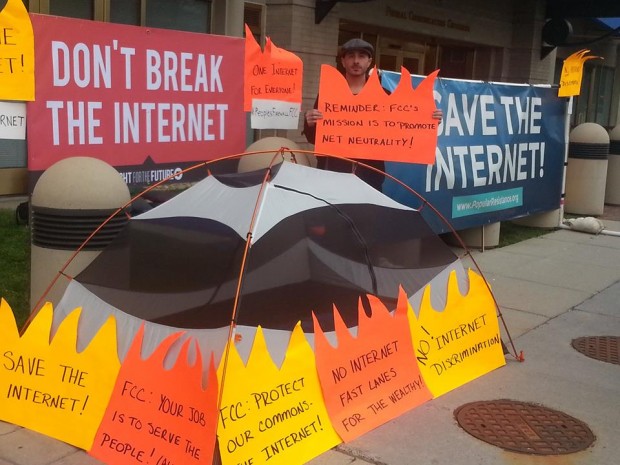 Schedule at the FCC Camp This Week

Thursday: Rally at 9 AM, Open Commission Meeting at 10:30

Last week we wrote about the importance of taking action to save the Net.  The Chairman of the FCC Tom Wheeler is proposing new rules that will be great for Comcast, AT&T, and Verizon, but terrible for the rest of us. The FCC has been surrounded by corporate lobbyists for too long.

On Wednesday we decided that we had to follow our own advice and decided to take action. We have set up an encampment outside of the FCC and each day are taking action to push the people’s interest in a free, open and equal Internet. These next few days, up to the meeting of the FCC Commissioners on the 15th are a critical time for us to set the agenda and protect the public interest.

Help us surround FCC headquarters with people who love the Internet and want to keep it open. Before May 15th when the FCC holds its next Open Meeting, citizen pressure needs to continue to build to demand reclassifying the Internet as a common carriers, putting into law net neutrality and removing all obstacles that prevent locally controlled public Internet. Join us in DC, take action online or organize a protest at an FCC office in your community.

Immediate Impact Of The Encampment

FCC Chairman Tom Wheeler is already struggling to defend his new rules proposal to allow fast lane net discrimination by his corporate allies at Comcast, Verizon and AT&T – but we need to keep building the pressure to get the other FCC commissioners on our side.

Activists are joining us in Washington, DC and have set up camp outside the FCC building (at Maine Ave. SW, entrance) to protest the new net discrimination rules – we will be there until the FCC drops the net discrimination rules. The encampment is on top of great work done by numerous organizations online resulting in more than one million people writing the FCC urging net neutrality and thousands of phone calls have demanded withdrawal of Wheeler’s proposal.

The negative response is getting bigger than anything the FCC expected. But in order for us to be successful, we need activists to come out and be a part of the action in DC.  More people will make a tremendous difference.

Right from the first moments we could see how the encampment would have a big impact.  Before a single protester had even shown up at the FCC’s doorstep, we got a call from Chairman Tom Wheeler’s office asking what we were doing, what our message was, how long we were staying and saying they may be interested in meeting with us. That’s particularly interesting, since when we helped deliver more than 1 million net neutrality signatures to the FCC last month, they wouldn’t meet with us.

The first afternoon we saw divisions emerging among the Commissioners, with two Democratic Commissioners coming out against moving forward on Wheeler’s proposal. One said the FCC should take at least a month to listen to the public, another said she would oppose any fee-based divisions on the Internet.  Of course, the Republicans want no regulation – which would be a disaster since it would let the biggest corporations profit and prevent them from being challenged by entrepreneurs. Right now, Wheeler seems to be standing alone for a fee based division of the Internet. If more people join the encampment it will increase the pressure and expand the fissures on the FCC as opponents of Wheeler will realize they are on the side of the public.

Wheeler, feeling the pressure, responded to thousands of emails sent to him from Popular Resistance with a carefully phrased response that did not answer our demands, but highlighted the differences between industry and the public interest.

On the third day one of the five FCC Commissioners came out to talk with us. Republican Commissioner Ajit Pai was very friendly; he is quite a joke-ster. This seems to be his way of avoiding discussion. When we noted that it was embarrassing that the country that invented the Internet was now ranked at 30 or lower (depending on the rankings) in quality of the Internet.  Pai’s response “We’re better than Estonia.” Kevin’s response — “Yeah, but not by much!”

After some friendly back and forth, he asked if it were a choice between the Wheeler’s proposal and doing nothing which would we choose. Pai essentially presented the choice of two evils — the Democrats rig the market for the wealthiest; and the Republicans take off all controls so the wealthiest can dominate the market.  The interesting thing about this choice of evils: the Chair’s proposal — fee based service — and the Republican –let the market decide — is they end up in the same place: Comcast, Verizon and AT&T will get wealthier and dominate the market, keeping challengers out; and the people and small businesses will be screwed.  The Internet’s creativity and positive impact will be ended.

We can’t keep letting the corporate duopoly rig our choices to two lousy ones; we need to break-free of their obvious manipulation. What they are doing with their two choices is treating us like children — get us fixated on two lousy choices when we really want something else. We told Pai that we are not limited to those choices. We want:

– Reclassification as a common carrier so the Internet could be regulated in the public interest;

– Net neutrality put into law so that there is no Internet discrimination and we all have equal access to all of the web; and

–  Remove barriers to public Internet at the municipal and local elections so communities are trapped into corporate domination of the Internet, but can develop public ownership of the Internet in the public interest.

If you cannot come to DC we urge people to organize similar encampments at other FCC branches in 27 other cities.  We were very pleased to see people in Los Angeles organizing to come out to an Obama fundraiser to protest the proposal to end net neutrality. It is important for President Obama — who appointed all five Commissioners of the FCC — and members of the senate — who confirmed all five Commissioners — to hear from the public and let them know that if net neutrality is ended, so does their career.

Now we know for sure we have the FCC’s attention, since they’ll have to walk past our encampment every day when they come to work. We’ve heard from our contacts in DC that Tom Wheeler was not expecting this kind of massive backlash to his net neutrality announcement last week. We need to let the FCC know that if they move forward with this proposal they are lighting the fuse to a massive citizen’s revolt that will impact their agency as well as the elected officials who put them in power.

At the same time that public pressure to withdraw Wheeler’s proposal is building, so is pressure in the business community. Two letters were sent to the FCC this week demonstrating broad opposition to Wheeler’s proposal as well as widespread support for reclassifying the Internet as a common carrier so it can be regulated in the public interest and net neutrality can be embedded in the law.

The first letter was signed by almost 150 tech companies. It included those from 3 person start-ups to giants like Google, Amazon, Twitter and Facebook and describes Wheeler’s proposal as “a grave threat to the Internet” as they would allow companies to “discriminate both technically and financially.” They opposed the end of net neutrality. The letter says FCC rules should not permit “individualized bargaining and discrimination,” and tells the FCC to “take the necessary steps to ensure that the internet remains an open platform for speech and commerce.”

The second letter was sent by 50 tech investors who told Wheeler that his proposal would undermine creativity and investment in the development of the Internet.  The letter says that “If established companies are able to pay for better access speeds or lower latency, the internet will no longer be a level playing field . . . startups with applications that are advantaged by speed (such as games, video, or payment systems) will be unlikely to overcome that deficit no matter how innovative their service.”

The group includes investors from around the country, including Union Square Ventures, Andreessen Horowitz, First Round Capital, and many more. Collectively they have funded companies like Twitter, Facebook, Foursquare, Tumblr, and others. You can read their full letter here.

We have made tremendous progress since Chairman Wheeler put out his proposal. But, AT&T, Verizon, and Comcast have dozens of paid lobbyists surrounding the FCC daily and many lawyers and others now working inside the agency.  This is a battle for the future of the Internet that we can win but  we have to keep expanding the pressure and fight back against Wheeler’s proposal.

Before May 15th when the FCC holds its next Open Meeting, citizen pressure needs to continue to build to demand reclassifying the Internet as a common carriers, putting into law net neutrality and removing all obstacles that prevent locally controlled public Internet. Join us in Washington, DC, take action online or organize a protest in your community.

We can ensure an open, free and equal Internet for the future, but the next week will be critical to our success.

* The Guardian.”Protesters set up camp at net neutrality rally outside FCC headquarters”.Read More

* The Guardian. “FCC under increased pressure over threat to net neutrality”.Read More

If you want to get involved contact us at info@PopularResistance.org.

This article is a modified version of material from Save The Internet and Popular Resistance.  It is a weekly review of the activities of the resistance movement. Sign up for the daily news digest of Popular Resistance, here.

Kevin Zeese, JD and Margaret Flowers, MD are organizers of PopularResistance.org; they co-direct It’s Our Economy and co-host Clearing the FOG. Their twitters are @KBZeese and MFlowers8.