Above Photo: People harmed by the detention and deportation systems hold Immigration and Customs Enforcement, CoreCivic and Williamson County officials to account during a mock tribunal at the T. Don Hutto immigrant detention jail in Taylor, Texas, May 5, 2018. (Photo: Garrett Graham)

On a sunny Saturday afternoon outside the T. Don Hutto immigrant detention jail in Taylor, Texas, Laura Monterrosa, dressed in a judicial robe, turned toward an individual standing in for the jail’s “defense,” representing officials from Immigration and Customs Enforcement (ICE), the private prison corporation CoreCivic and Williamson County.

“What is your defense to the charge of sexual abuse that I experienced inside the detention center?” she asked him in Spanish as an advocate translated for the “court’s” audience.

The defense’s answer was the sort of typical PR statement you might expect: “Part of treating our inmates and detainees with respect is giving them a safe place to live. We believe in safeguarding their rights, including protecting them from personal abuse, injury and harassment.”

But Monterrosa, a Salvadoran asylum-seeker released from the Hutto jail in March, was more than ready to respond with her side of the story before this open-air people’s tribunal. “I myself was subject to sexual harassment by an employee of CoreCivic. When I reported it, they tried to say that it was not true, or maybe that it was a consensual relation because they were upset that I had broken my silence,” Monterrosa told the audience. “My aggressor took advantage of my situation and … I sought help and the only thing that I got from you was isolation and retaliation.”

As she went on, her voice began to break. “There was no peace in my confinement. I was going crazy. I didn’t wish to live. There was no other way out than taking my life.”

Later, she and four other judges also harmed by the abuses of the immigrant detention system, rendered their intended verdict: guilty. But despite the obvious contrivances of their mock tribunal, survivors’ truth-commission-style testimonies illustrate the undeniable reality of the system-wide abuses of ICE, and loudly proclaim a path forward for human rights defenders and the broader left: abolition of the agency altogether.

Immigrant rights advocates and activists gathered Saturday, May 5, 2018, outside the T. Don Hutto immigrant detention jail in Taylor, Texas, to hold officials with ICE, CoreCivic and Williamson County accountable for the harms they have perpetuated against immigrant and undocumented communities. (Photo: Garrett Graham)

The judges closed Saturday’s tribunal with a series of accountability measures, including the cancelation of the contract between Williamson County, ICE and CoreCivic for the Hutto detention jail and the immediate release of all its detainees; monetary and medical reparations for the jail’s survivors and their families; and, of course, the immediate dismantling ICE, Customs and Border Protection and every immigrant detention jail in the nation.

A national campaign to hold ICE accountable for its systemic abuse is wrapping up this month with the conclusion of the last of 10 people’s tribunals taking place across the country. Dubbed, “#ICEonTrial,” the effort is being led by the Detention Watch Network, a national coalition of organizations that target immigration detention and deportation systems. The group has been out front in leading the charge to abolish ICE with its #DefundHate campaign.

“The #ICEonTrial campaign underscores ICE’s long-standing track record of abuse that is well documented and overwhelming. However, this is not just a pattern of bad behavior that can be fixed,” said Danny Cendejas, organizing director at Detention Watch Network. “Rather, ICE was an agency built on discrimination and injustice, and must be abolished.”

Like the tribunal at T. Don Hutto, an April tribunal in front of the National Archives in Washington, DC, also emphasized rampant sexual abuse in immigrant detention jails. According to data obtained by The Intercept in response to a public records request with the Department of Homeland Security’s (DHS) Office of Inspector General, 1,224 complaints involving sexual abuse and harassment were filed between 2010 and September 2017 regarding incidents that took place under ICE’s watch.

But officials told The Intercept in earlier responses that the DHS Office of Inspector General had received some 33,000 complaints between 2010 and 2016 “alleging a wide range of abuses in immigration detention.” The responsive data revealed that the office only provided records documenting investigations in 2 percent of the complaints. 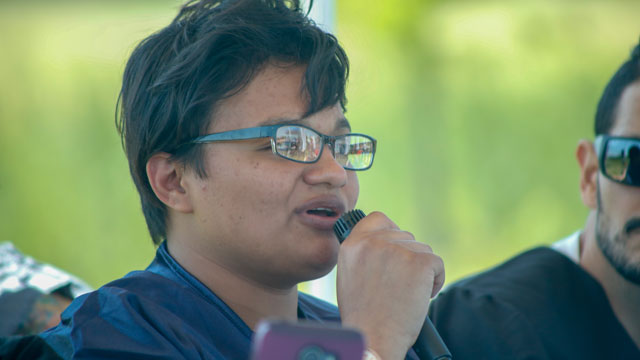 Laura Monterrosa tells her story before the people’s tribunal, May 5, 2018. (Photo: Garrett Graham)

Monterrosa’s story is emblematic of ICE’s institutionalized sexual abuse. As she tells it, a female guard at the Hutto detention jail repeatedly assaulted her while she was in custody there. After organizations like the Austin-based Grassroots Leadership, which put on Saturday’s tribunal event, pushed for a criminal investigation, the agency called her claims “unsubstantiated,” and allowed the guard to remain employed.

Monterrosa attempted suicide in February after ICE retaliated against her, including, she says, placing her into isolation for 60 hours. Shortly after that, US Reps. Lloyd Doggett, (D-Austin) and Joaquin Castro (D-San Antonio) penned a letter signed by 44 other members of Congress requesting ICE officials to “direct an investigation of ICE’s handling of sexual assault cases in Texas immigration detention facilities.” According to Doggett’s office, five other detainees reported being sexually assaulted at the Hutto jail between 2007 and 2011.

“Now that I’m out, I can better fight for the rights of the women who are still currently in detention,” Monterrosa told Truthout through a translator. “The women [in the detention jail] aren’t able to speak out because CoreCivic is prohibiting them from speaking.”

The FBI is now investigating Monterrosa’s case, but she told Truthout she was unable to discuss the details of the investigation.

Grassroots Leadership organizers and other immigrant advocates also held officials involved with the Hutto jail to account on a litany of other charges, including labor abuses. That charge is backed up by a class-action lawsuit filed in a federal court in February arguing that CoreCivic is violating the federal Trafficking Victims and Protection Act by forcing detained women to labor with little or no pay.

The tribunal comes after Grassroots Leadership organizers asked Williamson County commissioners to act on abuses at the immigrant jail. But the commissioners never addressed the problems, declining to include the issue on their agenda.

Officials from ICE, as well as Williamson County’s commissioners and sheriff, did not respond to Truthout’s request for comment. County Commissioner Terry Cook, however, wrote on Facebook after visiting the jail that, “Voting to end the contract with [T. Don Hutto] does not mean that the women will be released. It doesn’t even mean that the facility will close. … The Williamson County Commissioners Court has no authority over the detainees nor can they force the closing of the facility because [T. Don Hutto] is owned by a private company, Core Civic, and operated in conjunction with ICE, a federal agency.” 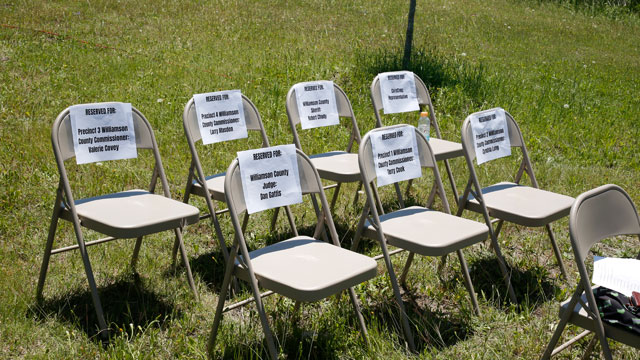 None of the officials invited to the people’s tribunal to defend themselves against the charges against them showed up. (Photo: Garrett Graham)

According to the Austin-American Statesman, Cook is correct in that the county can’t unilaterally close the privately operated jail. Still, it could cancel the contract with CoreCivic and ICE. The company pays the county $8,000 a month to employ a county representative to serve as a liaison between officials involved in managing the jail’s operations.

The T. Don Hutto jail has a long history of abuse. The jail originally incarcerated immigrant children when it first opened in 2006, but after a federal lawsuit filed by the American Civil Liberties Union over the children’s conditions was settled in 2009, federal officials began exclusively detaining adult women.

Despite the obvious absence of any of the officials involved with the jail at Saturday’s mock trial, the event still served a crucial purpose: to air the stories of survivors and others affected by the abuses there, and center them in a national discourse increasingly focused on abolition as a solution to the agency’s impunity for its state-sanctioned, racist violence.

The testimonies of the day, leading to the judges’ verdict and recommendations for accountability and reconciliation, lay bare ICE’s function within the larger authoritarian state apparatus under Trump. As Democrats like Kamala Harris continue to defend the agency’s existence and function, survivors are revealing that function as fundamentally and irredeemably violent and corrupt.

“We heard from the judges who were all formerly incarcerated or victims of deportation about the damage that causes to people, and I think we were able to come to community-focused solutions,” said Claudia Munoz, immigration programs director with Grassroots Leadership. “This event, for us, is a space for the community to start having those conversations about what a world without ICE, without detention centers, without prisons looks like.”