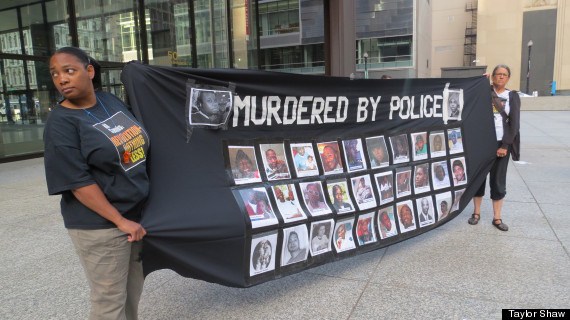 “It’s time for the President or the Attorney General to declare a state of emergency.”

The entire grand jury process was abused from day one in this case. The system is anti-black, the policies are anti-black, shooting first and asking questions later is anti-black and slandering slain black men and women in choreographed leaks to the press after these people are dead and can no longer speak for themselves is anti-black.

The Hands Up Coalition DC calls on Attorney General Eric Holder to stand with the people of Ferguson—and every other community in the United States whereA communique white police routinely slaughter black citizens—and intervene in this case. The local DA in Missouri hid behind the grand jury so he wouldn’t have to face political consequences. It’s time for the President or the Attorney General to declare a state of emergency: not because of what the citizens of Ferguson may do, but rather, based on the demonstrated assault the police department has waged against Ferguson citizens for decades.

A communique released earlier this week by the young people of Ferguson made clear that they are not asking for Officer Wilson to be killed, or to be shot and left in the street, or to be lynched. Rather, they are asking that a white police officer, who shot an unarmed black teen in front of witnesses be brought to trial in a system that was created and is maintained daily to provide justice. They want Officer Wilson brought into that system—not shielded from it by the grand jury.

The Coalition, standing in solidarity with #FergusonAction, has adopted the following demands:

The Hands Up Coalition DC encourages everyone concerned about police brutality, mass incarceration and justice denied to black communities terrorized by modern day Slave Patrols disguised as police officers to join the national text network. Text “HANDSUP” to 90975. This will enroll people in a nationwide database to be engaged in future mobilizations.

#DCFerguson Movement led a march and rally “the day after” the grand jury verdict in response to the unjust verdict at Mt. Vernon Square Park in Washington, DC.

We need for everyone to participate in the demonstrations in front of the Department of Justice starting December 1st or find a demonstration or rally in your area.

Dr. Marsha Coleman-Adebayo is the author of No FEAR: A Whistleblowers Triumph over Corruption and Retaliation at the EPA, that is available through amazon.com. Dr. Coleman-Adebayo worked at the EPA for 18 years and blew the whistle on a US multinational corporation that endangered vanadium mine workers. Marsha’s successful lawsuit led to the introduction and passage of the first civil rights and whistleblower law of the 21st century: the Notification of Federal Employees Anti-discrimination and Retaliation Act of 2002 (No FEAR Act). She is Director of Transparency and Accountability for the Green Shadow Cabinet, serves on the Advisory Board of ExposeFacts.com., and coordinates the DC-based Hands-Up Coalition. www.marshacoleman-adebayo.com.