Above Photo: Protesters in Vail, Colo., preparing to march outside the hotel where governors of Western states are meeting with members of the Trump administration, including Interior Secretary David Bernhardt. RAE ELLEN BICHELL / MOUNTAIN WEST NEWS BUREAU

Protesters dressed as swamp creatures kayaked down a river while others marched along a bike path, past private tennis courts and swanky swimming pools outside the hotel where governors met with Interior Secretary David Bernhardt.

“My shirt says keep your oily hands off of Colorado’s public lands,” says Chelsea Stencel, who was among the protesters. “David Bernhardt, the ultimate swamp monster.” 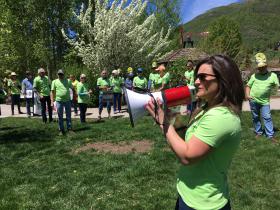 Bernhardt has been compared to a swamp monster on multiple occasions for his former business ties to the industries that he’s now in charge of regulating, as the Mountain West News Bureau has reported.

Protesters came from across the state, including Fort Collins and Greeley, and were concerned about policies to open up public lands for oil and gas drilling.

“He’s leasing the public lands to oil and gas and uranium mining for sometimes $1.50 an acre, which is obscene,” says Deborah McLaughlin. 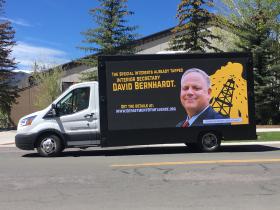 Others worry about potential increases in mining, including a plan to expand a limestone quarry in nearby Glenwood Springs.

“Right above Glenwood Springs, which would really devastate that whole community,” says Jerry Berg. “(Bernhardt) is an oil and gas lobbyist in charge of our public lands. And so we’re here to protest that.”