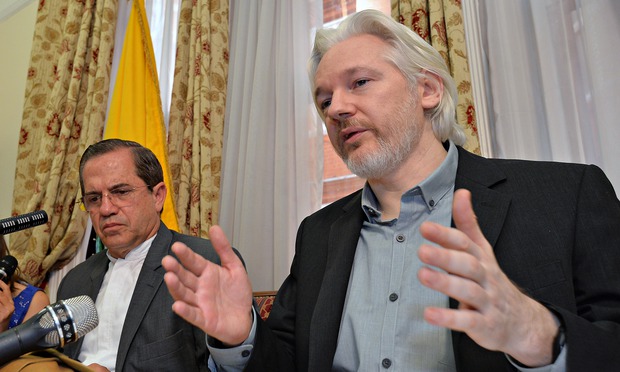 Sweden’s chief prosecutor said on Tuesday she was seriously considering an invitation by the British government to question Julian Assange in London, before a court ruling in Sweden on whether to lift the warrant for his arrest.

The Foreign Office said on Tuesday it would welcome a request by the Swedish prosecutor Marianne Ny to question Assange inside the Ecuadorian embassy and would be happy to facilitate such a move, which is seen by Assange’s lawyers as an important step towards breaking the deadlock surrounding the case.

The appeal court in Sweden is due to rule as soon as next week on a request by Assange’s lawyers that the warrant against him be rescinded, but the timing of the Foreign Office’s remarks appeared to be accidental.

Assange has sought political asylum in the Ecuadorian embassy, where he has lived for more than two years to avoid a perceived threat of extradition to the US for publishing military secrets. Since 2010 Swedish prosecutors have been trying to question him about allegations of rape and sexual molestation, although he has not yet been charged.

“These are matters for the [Swedish] prosecutor to decide on, but if she wished to travel here to question Mr Assange in the embassy in London, we would do absolutely everything to facilitate that. Indeed, we would actively welcome it,” foreign minister Hugo Swire said on Tuesday in the House of Commons.

Ny said through a spokeswoman that the remarks were “all news to her”, and she would probably respond to them publicly within the next couple of days.

The argument that the prosecutor should interrogate Assange in London is a central element of his lawyers’ appeal, because, they say, it demonstrates that the prosecutor has not conducted the case with sufficient “urgency or effectiveness”, thereby condemning Assange to indefinite “deprivation of liberty”. However, in documents submitted to the Appeal Court, the prosecutor states she has “continually, over the past two years, tested the conditions and the practical possibility for conducting the interrogations and other necessary investigative measures in Great Britain”. Responding to a question from Anne McIntosh, Conservative MP for Thirsk and Malton, Swire said Ny was “quite rightly, a fiercely independent lady, and independent of the executive”.

McIntosh said she and other Tory backbenchers saw the failure to question Assange in London as one of the barriers to justice in the case.

She had been moved to ask the question by concern from her constituents over the case of footballer Ched Evans, who is challenging his conviction for rape after serving two years in jail. “I believe if [Assange] is innocent he should submit himself to the law,” she said.

Commenting on the response to her question, McIntosh added: “Presumably the prosecutor would have the time to pop over and speak to [Assange] before the Appeal Court ruling.”

Swedish legal opinion at a senior level has this year swung against the prosecutor’s decision not to travel to London to interview Assange, with Anne Ramberg, head of the Bar Association, calling the current impasse a “circus”.

Ramberg told the Guardian on Tuesday: “Many voices in Sweden take a view along the same lines [as the Foreign Office]. It is time for this longstanding matter to be brought to a fair and proportionate end.”

A spokeswoman for the Foreign Office said its willingness to help Swedish officials to question Assange was not a change of policy but it was “likely” that the message had not been made clear amid all the other questions about the case. Details of any questioning “should be agreed between the Swedish Prosecutor, Mr Assange and the Ecuadorian Embassy”, she said.

A spokeswoman for Sweden’s new justice minister Morgan Johansson declined to comment until the Appeal Court rules in the case.