Above Photo: Veterans and hundreds of LGBTQ supporters mobilized with hits of the President’s tweet announcing a ban on transgender military service members. Photo: John Zangas

Washington, DC– A tweet issued by President Trump Wednesday morning appeared to rescind a Department of Defense policy which allows transgender men and women to serve openly in the U.S. Armed Forces.

Activists were quick to react and staged a protest outside the White House within hours.

“I am shocked, angry and feel betrayed,” said Kara Zajak, a U.S. Navy Submariner, who identified as a transgender woman. “We had all this going through, it was passed, we had the [military] instructions and we were following them,” she said.

Trump’s tweet caught the Pentagon flat-footed, and its website showed the policy was still in effect as of Thursday. The president apparently did not directly order military leaders to change policy in any documented form. According to a letter seen by Reuters, the Chairman of the Joint Chiefs of Staff told the military that no changes would be implemented until a presidential directive.

In June 2016, former Secretary of Defense Ash Carter announced implementation of the policy paving the way for transgender people to serve in the military. Since then, the Department of Defense has embarked on a massive training initiative requiring all of its uniformed service members and civilian employees to prepare for the policy changes. The deadline for all personnel to complete the training passed on July 1 of this year. 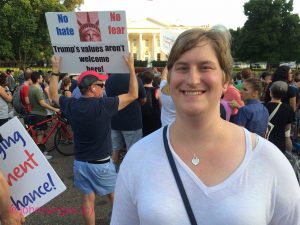 Kara Zajak, a U.S. Navy Submariner who identified as a transgender woman, said she was shocked and upset, since the policy had already been implemented. Photo: John Zangas

Zajak spoke highly of her active service, touting the “strength” in diversity and how it made for a “better” fighting force. “It’s great to think about being in the military, [and] nobody cares about who you are as long as you do your job,” she said.Zajak, the U.S. Navy Submariner who protested at the White House, is a member of SPART*A, an LGBTQ organization that was formed in 2012 to help transgender folx navigate the complicated process of changing their gender markers in their military records. SPART*A had celebrated the policy allowing trans men and women to serve when it was finally approved in 2016.

Trump’s desire to revoke the policy leaves unanswered questions about the status of over 2,500 active service members who have already identified as transgender. It also leaves in limbo the status of many others who have begun the enlistment process but have not yet been sworn into military service.

When service members are separated from the military, they receive a document which attests to the quality of their service. Information on this document, known as the DD-214, is used for entitlement to benefits and for access to federal or state employment.

If the policy revocation goes into effect, there would be significant impacts to transgender people already serving. Another question is how will it will change their DD-214.

Typically, the character of service for those who are discharged with good service and completion of their enlistment contract is Honorable. And since this document is what veterans use to access VA benefits and federal or state employment, it could affect those transgender folx who are discharged as a result of the policy revocation before their contracts are completed. 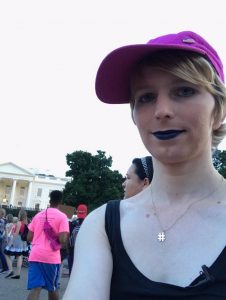 Chelsea Manning appeared at the White House but did not speak or protest. She took this selfie and posted it on social media.

“When Don’t Ask Don’t Tell was repealed, we realized there were still so many issues that affect the LGBTQ community,” said Ashley Broadway-Mack, President of the American Military Partner Association. The organizationhelps LGBTQ family members with issues related to their military service.

Broadway-Mack told of an active duty service member in Afghanistan who identifies as a transgender male, who contacted her after he learned of the revoked policy. “What do I say to him?” she asked. “His unit has already accepted him and now this has happened,” she said. “He doesn’t know what he’ll do.”

Zajak was more blunt about Trump’s decision to revoke the policy, invoking the spirit of the 1969 Stonewall riots and struggle for LGBTQ rights as started by transgender folx. “You picked a hell of a fight,” she said. “We know how to fight so we are going to get our rights. We’re not going to give an inch after we’ve already got them.”

And their fight they may be more formidable than previously thought. Late Wednesday night the Department of Justice published an amicus brief which stated LGBTQ rights were not protected under Title VII of the Civil Rights Act of 1964. 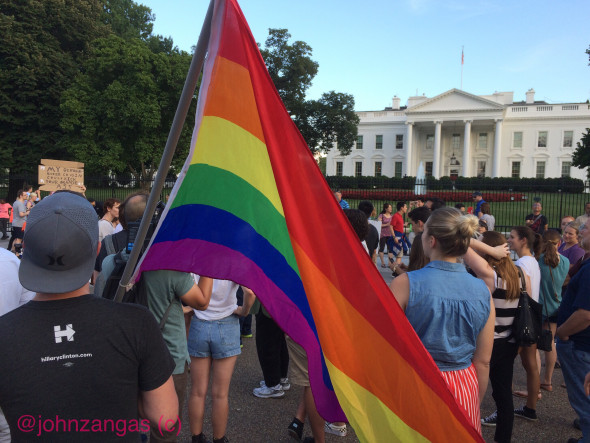