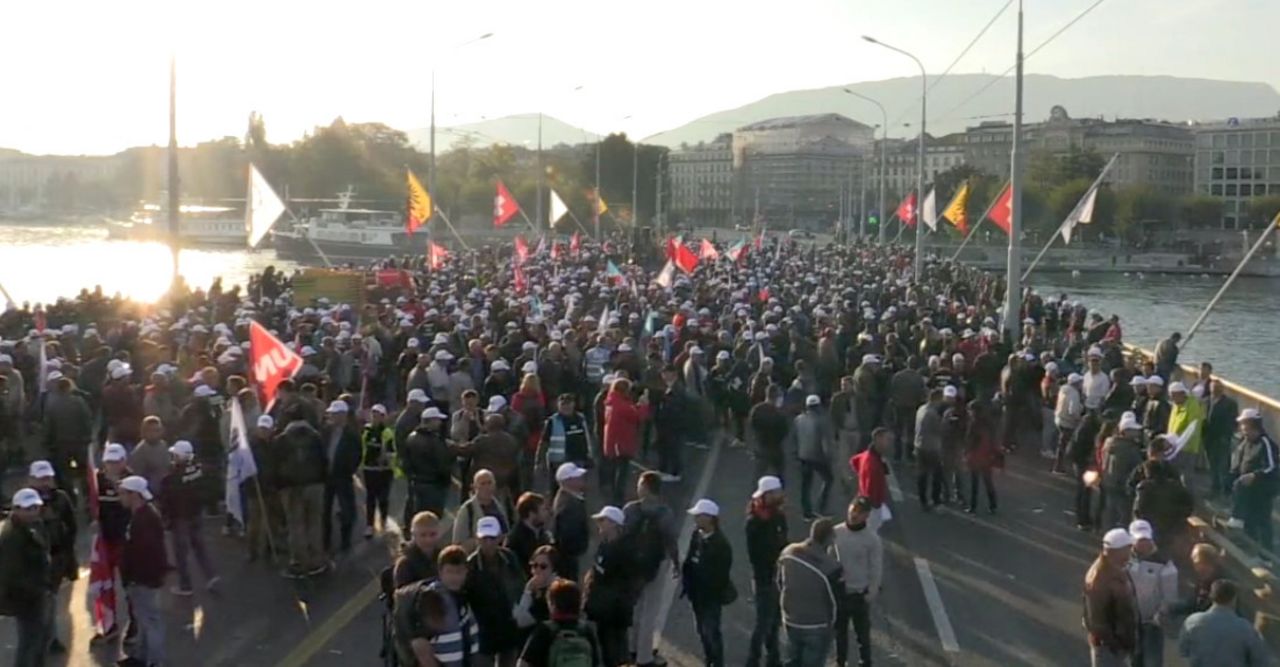 The new anti-terror law adopted by Switzerland last weekend is one of the harshest police laws in all of Europe. Its adoption in a referendum highlights the urgency of building a genuine workers’ party in Switzerland that defends as a matter of principle the democratic rights of working people.

The “Federal Law on Police Measures to Combat Terrorism” (PMT) blatantly disregards the principles of the so-called “democratic rule of law.” For example, it flouts the civil-democratic separation of powers because it allows the federal police to intervene against so-called “dangerous persons” even without sufficient evidence for criminal proceedings and without an order from a judge.

The law also disregards the principle of personal data protection, allowing police officers to retrieve and exchange “particularly sensitive personal data” amongst themselves. This explicitly includes, among other things, “data on religious and ideological views or activities.”

The envisaged police measures range from the requirement of regularly reporting to an authority, contact bans, a ban on leaving the country, and passport revocation to up to nine months of house arrest. They can be imposed on juveniles as young as 15 and in some cases on children as young as 12 who are deemed “dangerous persons” in the eyes of the police. For people without a Swiss passport, “deportation detention,” or custody pending deportation, is also provided for. And anyone who disobeys police orders can be punished with a prison sentence of up to three years.

The law is officially justified by the attack on the Charlie Hebdo editorial office in Paris, France in 2015. It is supposed to give Swiss police the ability to “take preventive action against terrorist threats.” But it defines “terrorist activities” so vaguely that it could readily include unruly youths and social protests. In particular, it could apply to political activists who are explicitly working to change social conditions.

The law states, “Terrorist activity is defined as efforts to influence or change the order of the state by committing or threatening to commit serious crimes or by spreading fear and terror.”

This definition of terrorism is highly problematic and has been sharply criticized by legal experts. These include, for example, Nils Melzer, the UN Special Rapporteur on Torture, who has also vehemently defended Julian Assange. Melzer calls the definition “beyond good and evil,” because it no longer necessarily defines terrorism as a violent crime.

To this end, the UN Special Rapporteur on Human Rights, Northern Irish law professor Fionnuala Ní Aoláin, also stated in an interview with the Republic newspaper: “This definition of terrorism is used by authoritarian states to suppress opposition.”

In fact, this definition of “terrorist activity” would also fit striking and protesting workers blocking access to their businesses, or angry tenant groups demanding the expropriation of real estate sharks. It could also apply to socialist politicians and labour leaders whose stated goal is to abolish capitalism, since even the statements of these groups could “spread fear and terror” among shareholders, business representatives and state officials.

A committee including the Young Greens, the Jusos (youth organization of the Social Democrats), the Young Green Liberals and the Pirate Party, as well as non-governmental organizations and civil rights initiatives, has launched a referendum against the “arbitrariness paragraph.” As they explain, the law is “an attack on the security of the Swiss population. It suspects and endangers blameless citizens: anyone can be placed under house arrest for up to nine months without having committed a crime…Those affected can only defend themselves by proving that they will never commit a crime in the future. This is simply impossible.”

The Social Democratic Party (SP) issued a “No” slogan. However, it has entirely failed to conduct any public campaign against the law to warn and mobilize the working population. After all, this party holds seats in the government, including the seven-member Federal Council. In this all-party coalition, the SP also works unanimously with the far-right SVP.

The law was approved by 56.6 percent in the vote last Sunday, June 13. Turnout was relatively high by Swiss standards, at 59.5 percent, and all cantons except the City of Basel voted in favour of the new police law.

But what does a voting majority mean in Switzerland? In fact, a total of only 1.85 million, just over one-fifth of the country’s 8.6 million inhabitants, voted in favour of the “Arbitrariness Law.” About 2.2 million inhabitants do not have a Swiss passport. Most importantly, a large segment of the working class has no voting rights at all and could not participate in the referendum. Switzerland has a multinational working class, with Italians, Tamils, Germans, Turks, Bosnians, workers from the Maghreb and others working alongside Swiss workers.

The law clearly expresses a deep-seated fear on the part of the Swiss bourgeoisie and authorities of any stirrings within the working class. Switzerland is one of the richest countries in the world, but it is heavily dependent on the world economy. Its wealth is profoundly unequally distributed. Social antagonisms are strained to the breaking point, and the pandemic has laid them bare.

The bourgeoisie continues to profit from Switzerland as a banking centre and respectable tax haven, as well as from upscale Alpine tourism. Switzerland also maintains small, highly specialized industries that are, however, particularly dependent on the weal and woe of the EU.

During the pandemic, Switzerland, like Sweden, refused to close businesses and schools. Although the second wave of the pandemic saw a steep rise in the number of infections and deaths, Switzerland was the only Alpine country to allow the ski season to open last winter. Nearly 10,870 COVID-19 patients have died in the pandemic, more than half of them this year alone. No doubt many victims might still be alive had the federal and cantonal governments not so irresponsibly enforced their profit-before-life policies.

The working class is bearing the brunt of the pandemic in two ways: first, those who work in hospitals or nursing homes, for production, in construction, at the supermarket checkout, for the rail system or in restaurants have few options to protect themselves from COVID-19.

At the same time, the working class has been particularly affected by pandemic job losses. According to figures from the Swiss Federal Statistical Office, employment figures show a fourth quarter of sharp decline in early 2021, with job cuts last year in manufacturing (-14,000 jobs), construction (-6,000 jobs), and hospitality (-35,000 jobs). Recently the airline Swiss again announced mass layoffs.

With its new, harsh police law, the Swiss bourgeoisie is consciously preparing for an imminent social explosion. The working class must prepare for the same!

The vote has once again shown the urgency of building a political party among the working people of Switzerland that will defend their democratic and social interests and link them to the international working class, independently of all nationalist parties and trade unions. Such a party can only be built as a section of the International Committee of the Fourth International (ICFI).