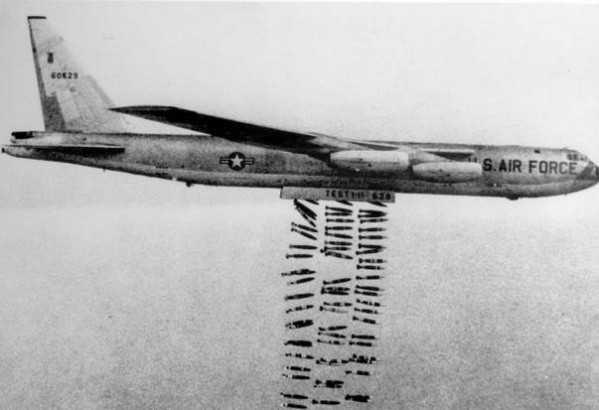 Above Photo: Tough not to call it a war crime when the U.S. dropped more bombs during the Vietnam War than it had on Germany during World War II. (Photo: Public Domain)

The White House and State Department are miffed that Syria and Russia are cleaning up their Jihadis in Aleppo city.

There is a false claims evolving in western “news” that the current Aleppo operation led to the breakdown of the ceasefire agreement. Two points on this: 1. The ceasefire did not “break down”. It expired after a previously agreed period. Both sides did not agree to a prolongation. 2. The most important ceasefire point was the physical separation of al-Qaida and other U.S. proxy rebels. The U.S. was unable (or unwilling) to fulfill that point.

The main priority in Syria, according to the document, is the demarcation of territory controlled by Daesh and al-Nusra Front terrorist groups and territories controlled by Syrian rebels.After the end of the ceasefire the U.S. and its subaltern allies are flooding Syria with new weapons:

Both rockets and MANPADs are part of a “Plan-B” the CIA had already developed in May 2015 but which was held back until now. There are likely additional military elements to this plan. On the diplomatic side the U.S. (and its stooges) -obviously unable to act rationally- now imitate defiant children. “If we can’t get exactly what we want we will never again talk to you.”

A very major issue for Syria (and one reason why many Syrians flee the country) are U.S. and EU sanctions. Their consequences were so far hardly ever reported. Here is the first major piece in U.S. media about them: U.S. and EU Sanctions Are Punishing Ordinary Syrians and Crippling Aid Work, U.N. Report Reveals

In a 40-page internal assessment commissioned to analyze the humanitarian impact of the sanctions, the U.N. describes the U.S. and EU measures as “some of the most complicated and far-reaching sanctions regimes ever imposed.” Detailing a complex system of “unpredictable and time-consuming” financial restrictions and licensing requirements, the report finds that U.S. sanctions are exceptionally harsh “regarding provision of humanitarian aid.”
…
An internal U.N. email obtained by The Intercept also faults U.S. and EU sanctions for contributing to food shortages and deteriorations in health care.
…
The email went on to cite sanctions as a “principal factor” in the erosion of Syria’s health care system.The piece also explains that the Syrian and Russian behavior towards insurgent occupied cities is in no way more severe than the usual U.S. procedures:

Meanwhile, in cities controlled by ISIS, the U.S. has employed some of the same tactics it condemns. For example, U.S.-backed ground forces laid siege to Manbij, a city in northern Syria not far from Aleppo that is home to tens of thousands of civilians. U.S. airstrikes pounded the city over the summer, killing up to 125 civilians in a single attack. The U.S. replicated this strategy to drive ISIS out of Kobane, Ramadi, and Fallujah, leaving behind flattened neighborhoods. In Fallujah, residents resorted to eating soup made from grass and 140 people reportedly died from lack of food and medicine during the siege.To help with the sanctions and other issues China had recently agreed with Syria to provide medical support. But just like Russia, China is now considered a U.S. enemy and the CIA and Pentagon are eager to fight it.

Risky business: Is US supporting anti-Chinese militants in Syria?

With war hawks in US/Turkey/Qatar/Saudi arming and funding anti-Chinese militants in Syria that are planning more attacks on Chinese embassies and interests abroad, coupled with US gunboat diplomacy in the South China Sea, this dangerous “deterring the dragon” combination risks turning into a “provoking the dragon” scenario, and may escalate into a military conflict between two nuclear powers.(The piece also includes this vignette about the anti-Chinese TIP Uighurs in Syria:

THAAD is a long range missile defense system. Putting it into South Korea makes no sense if one wants to counter shorter ranged North Korean missiles. The target here is obviously China. This will have consequences.

A lot of hype is made today about two hospitals in east-Aleppo that were allegedly bombed:

The second piece, in the Washington Post, originally included this sentence:

Neither hospital was seriously damaged and both are expected soon to function again, …I pointed that out several times today to “bombing” hypers including to Washington Post writers. Soon after that the piece was “updated” and the sentence changed to:

Both hospitals are expected to be repaired, but they are badly damaged.Still, according to the piece, only two people were killed in the relevant strikes and three injured. Had the attacks actually targeted the crowded hospitals both would have been destroyed and many more people would be dead. Instead the hospitals seem to have received only collateral damage from strikes on nearby military targets. But pointing that out does not fit the U.S. propaganda line.

Meanwhile the U.S. and its allies continue their daily business of killing people in Syria and elsewhere.