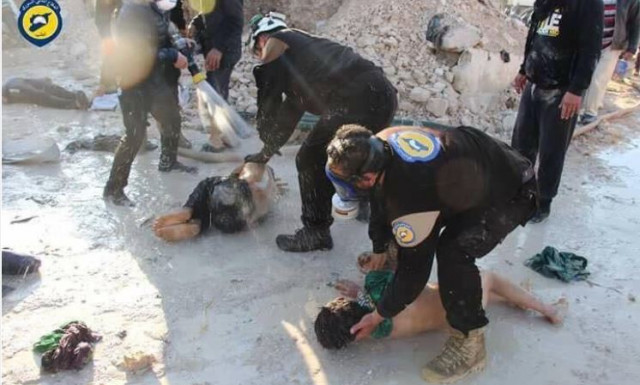 Above photo: The NATO and Gulf State-funded White Helmets handling alleged Sarin gas victims with their bare hands goes against all medical procedure for this type of attack. From Twitter.

The chances that the Syrian military actually carried out the gas attack in northern Syria are pretty much ZERO. The Syrian government has absolutely nothing to gain from such an attack, and a lot to lose.  They are steadily gaining more ground, and the terrorist groups are on the run.  The Trump administration announced this week that it will not seek Assad’s ouster.  Peace talks to end the war are about to resume.  So who benefits from this horrific attack?

The sources for the gas attack reports are the rebel forces, their own media, and the “White Helmets,” who are notorious for creating “regime change” propaganda against the Assad government.  Famed investigative reporter Seymour Hersh has documented that the last large sarin attack blamed on the Syrian government was actually carried out by terrorist groups with the support of Turkey and Saudi Arabia.  Hersch also documented that chemical weapons were transported from Libya to U.S.-backed rebel groups in Syria by the CIA and Hillary Clinton’s State Department.

Yet the mainstream media do not mention any of this.  They immediately jump all over this story like trained dogs. They ask no tough questions.  They entertain no doubts. They repeat previous lies that have already been debunked. They unashamedly interview sources who have long been cheerleaders for military intervention in Syria.

The enemies of Syria don’t even wait for an investigation to begin.  As if on cue, the White House, Members of Congress, Israel, the UK, France, the European Union and even Amnesty International are condemning the Syrian government.

So sit back and enjoy the show.  Watch a False Flag operation in motion.  Marvel at the coordination and power that the plotters have at their command.  See if you can solve the mystery.

Who is really behind this False Flag?  Besieged and desperate terrorists? Their supporters in Saudi Arabia, Turkey, NATO and the U.S.?  What is their intention?  Is it a last ditch attempt to revive “regime change” war and terrorists in Syria?  Is it an excuse for deploying more U.S. troop to Syria?  A cover for the apparent U.S. strategy of breaking up Syria into small pieces?

I recommend the following article by Patrick Henningsen in 21st Century Wire.  You will also find links to other valuable articles by Seymour Hersch, Robert Parry and Swedish Doctors for Human Rights.

NOTE: We also recommend Something is Not Adding Up In Idlib Chemical Weapons Attack by Paul Antonopoulos