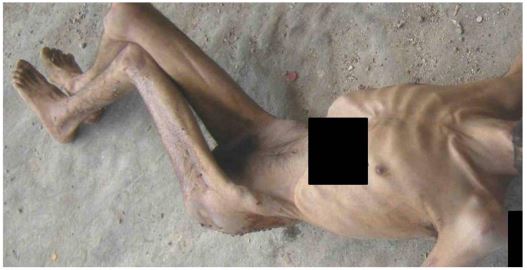 Above: Photograph from the report on torture and killing of prisoners in Syria.

The report by former war crimes prosectors alleges the Syrian regime has tortured 11,000 prisoners. The claim is credible, but don’t forget the agenda.

See the report on torture and killing of prisoners in Syria here.

The government of Syria has long used torture, collective punishment, and horrific detention conditions as a response to domestic threats to its power.

When times are bad, like now or during the Sunni Islamist insurgency that challenged Hafez al-Assad’s government in 1982, the number of victims goes up. That’s what happened with the sacking of Hama in 1982 that left at least 10,000 civilians dead. And there’s been little doubt that the government of Hafez’s son,Bashar al-Assad, has tortured thousands to death in detention since the country’s civil war broke out in 2011 – never mind the far more devastating shelling of civilian neighborhoods.

When times are good, torture has been a sort of background radiation to the country’s repressive politics. It’s going on, but not so in your face that it gets in the way of doing business with the country. That’s one of the reasons it was possible for the US during the Bush administration to outsource torture and interrogation to Mr. Assad without expecting much of an outcry.

Which leaves me feeling kind of awkward about a report released Monday that alleges 11,000 prisoners have been tortured, starved, or otherwise beaten to death in Syrian government custody since 2011. It’s a believable assertion based on what is known about Syrian government practice and the conduct of the war. But the report itself is nowhere near as credible as it makes out and should be viewed for what it is: A well-timed propaganda exercise funded by Qatar, a regime opponent who has funded rebels fighting Assad who have committed war crimes of their own.

The report was given to The Guardian and CNN yesterday and released in full on the web. It was paid for by Qatar and organized through Carter-Ruck, a London-based law-firm hired by the tiny Gulf monarchy. Three former prosecutors, Desmond de Silva and David M. Crane, who participated in the Special Court for Sierra Leone, and Geoffrey Nice, who prosecuted Slobodan Milosevic at the International Criminal Tribunal for the Former Yugoslavia, were retained, along with forensic experts, to review pictures from a man presented as a former Syrian military policeman identified only as “Caesar.”

Caesar is said to have been a photographer for the military assigned to documenting deaths in detention. It is not unsurprising that someone would have this job. But the report by itself shouldn’t be treated anything like the slam dunk it has been in the press, for a variety of reasons.

This is a single source report, from an unidentified man, who is related by marriage (according to a footnote on page 15 of the report) to a similarly unidentified member of the “Syrian National Movement” who “left Syria five days after the civil war against the current Syrian regime had begun and established contact with international human rights groups.” The Syrian National Movement has been funded by Qatar and is devoted to Assad’s downfall and the source has been working with this unidentified Assad opponent since “around September 2011.”

And yet the report was rushed into publication due to unspecified “time constraints” that made it impossible to “produce a detailed report regarding the exact injuries present in each image for each individual.”

The document says “Caesar” was interviewed on Jan. 12, 13 and 18 of this year. The report was provided to reporters yesterday, Jan. 20. That’s just two days after the final interview and only 8 after the first. That short a time frame simply does not allow for the great care and consideration the report’s authors repeatedly assert went into their effort (as they write on page eight, “the members of the inquiry team subjected all evidence heard and viewed to rigorous scrutiny.”)

Why the rush for evidence that a source had been providing since September 2011?  It’s pretty clear that the “time constraint” was set by the government of Qatar, who paid for the document (rather than, say, a neutral party with professional credentials in this kind of investigating like Human Rights Watch). It’s a safe assumption that Qatar wanted this released ahead of UN-sponsored peace talks scheduled for Geneva this week. Anything that further demonizes Assad is a good thing from the perspective of Qatar and many of his opponents.

What of the assertion of “11,000 dead detainees?” Well, the report’s executive summary is a little different from the more detailed interior.

Compare this from the executive summary on page four:

In all, approximately fifty-five thousand (55,000) images have, to date, been made available outside Syria by these processes. As there were some four or five photographs taken of each body this approximates to there being images of about eleven thousand (11,000) dead detainees.

Within these five thousand five hundred (5,500) images, images of a total of eight hundred and thirty five (835) deceased persons were evaluated in detail. Of these 20% showed evidence of inflicted trauma, 30% were equivocal, 42% showed emaciation.

So in fact only images of 835 people were “evaluated in detail” by a team that asserted in its executive summary (the vast majority of people never read beyond the executive summary of any document) that 11,000 people had been systematically killed in detention.

In other words, they simply extrapolated from a sample of 10 percent of the pictures (with no evidence or claims presented as to how a randomized sample would have been taken) to the whole.

Association with war crime prosecutions is no guarantor of credibility – far from it. Just considerLuis Moreno Ocampo’s absurd claims about Viagra and mass rape in Muammar Qaddafi’s Libya in 2011. War crimes prosecutors have, unsurprisingly, a bias towards wanting to bolster cases against people they consider war criminals (like Assad or Qaddafi) and so should be treated with caution. They also frequently favor, as a class, humanitarian interventions.

This piece is not an attempt to defend Assad from the charge of war crimes carried out against his government. There has been much stronger and more credible evidence of this than the Qatar report going back years. Just as there is strong and credible evidence of torture, summary executions, and associated war crimes being carried out by various rebel factions (a fact completely ignored in today’s report).

But after the lies gobbled up the US people and Congress from anonymous sources from the first Gulf War (remember Hill & Knowlton’s fabrication of Iraqi soldiers tossing Kuwaiti babies out of incubators) to the second (the fabricated intelligence of weapon’s of mass destruction peddled by “Curveball” and the like) to the ongoing reassessment of the strength of the public evidence presented by the US about the certainty that the Assad government used sarin last year, this kind of report has to be treated with kid gloves.

Dan Murphy is a staff writer for the Monitor’s international desk, focused on the Middle East. Murphy, who has reported from Iraq, Afghanistan, Egypt, and more than a dozen other countries, writes and edits Backchannels. The focus? War and international relations, leaning toward things Middle East.