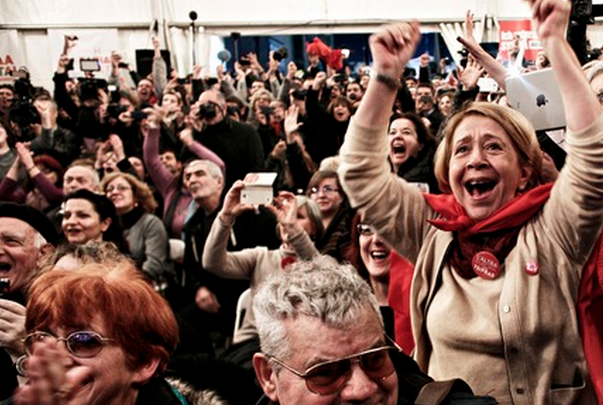 The euro briefly slumped to an 11-year low in Asian trading on Monday morning, while the Greek stock market slumped 5% in volatile early trading.

Voters handed power to Alexis Tsipras, the charismatic 40-year-old former communist who leads the umbrella coalition of assorted leftists known as Syriza. He cruised to an eight-point victory over the incumbent centre-right New Democracy party, according to exit polls and projections after 99% of votes had been counted.

The result surpassed pollster predictions and marginalised the two mainstream parties that have run the country since the military junta’s fall in 1974. It appeared, however, that Syriza would win 149 seats – just short of securing the 151 of 300 seats that would enable Tsipras to govern without coalition partners.

“The sovereign Greek people today have given a clear, strong, indisputable mandate,” Tsipras told a crowd of rapturous flag-waving party supporters. “Greece has turned a page.Greece is leaving behind the destructive austerity, fear and authoritarianism. It is leaving behind five years of humiliation and pain.”

Greece’s incumbent prime minister, Antonis Samaras, whose conservative-dominated coalition had been in office since June 2012, conceded defeat early in the evening and admitted that “mistakes and injustices” had been made but insisted he was leaving office with a clear conscience. “I assumed charge of a country that was on the brink of collapse … and we restored its international credibility,” said Samaras.

Britain’s prime minister, David Cameron, said the election result will increase economic uncertainty, while the chancellor, George Osborne, went further, saying that Syriza’s promises will be “very difficult to deliver and incompatible with what the eurozone currently demands of its members”.

Tsipras’s victory, widely predicted, was nonetheless stunning in scale and impact. Single-party majorities are very rare in parliamentary systems in Europe these days, in recent years occurring in only Hungary and Slovakia under strongman leaders of the right and left. For an upstart party such as Syriza, which has never been tested in power, the victory highlighted how five years of fiscal orthodoxy in Europe have turned politics upside down.

The damning popular verdict on Europe’s response to financial meltdown is a haunting outcome for the EU’s political elite. For the first time, power has been handed to populist outsiders deeply opposed to Brussels and Berlin, albeit not anti-European, unlike their counterparts on the far right across the EU. For the first time a child of the European crisis, an explicitly anti-austerity party, will take office in the EU.

“There’s a sense that these populist movements are led by people who didn’t go to university with [the leaders] and that if you ignore them they will go away. They’ve been ignored and patronised,” said a senior EU policymaker in Brussels. “The underlying causes are economic. We want a Europe that is delivering tangible benefits to citizens. That’s not what it feels like at the moment.”

The result throws into question whether Greece will remain in the eurozone and the union overall, sets a precedent for anti-austerity insurgents elsewhere in Europe – notably in Spain, which will hold elections this year – and underlines public rejection of the policies prescribed mainly if not exclusively by Berlin in recent years.

Tsipras now holds Greece’s European fate in his hands. Athens and its creditors – the EU and the International Monetary Fund, which have bailed the country out to the tune of €240bn (£178bn) since 2010 – will spend weeks in wrenching negotiations over the terms of continued assistance and whether his new government will do enough in terms of further cuts and reforms to keep Greece in the euro.

Neither side wants Greece to crash out of the currency. But positions are very far apart, and currently unbridgeable. While the German central bank promptly declared that Greece needed more loans but only on eurozone terms, senior Syriza figures announced that the bailout diktat was “dead”.

“Grexit is unthinkable,” said a second senior Brussels policymaker involved in the negotiations. “It would be extremely bad. Europe is about irreversibility. If you start doubting that, you start pricing in the risk of fragmentation and soon you have no monetary union. The only chance of Grexit is if Greece defaults on its payments. Morally, that would be saying they want to leave.” A default would trigger a run on the banks, capital flight and capital controls.

The clock is already ticking. When the German chancellor, Angela Merkel, French president François Hollande, British prime minister David Cameron et al assemble for an EU summit in Brussels in just over a fortnight, they will be joined at Europe’s top table by Tsipras, probably the only man there not wearing a tie. The symbolism will be enormous. Europe’s anti-mainstream mavericks and populists are no longer just hammering on the doors.

Before that summit on 12 February, Tsipras, say people involved in the negotiations, will want to have already fleshed out the contours of a deal. Berlin and Brussels have been quietly sending envoys to Syriza, including Tsipras, for weeks. He has been “perfectly reasonable”, say senior Brussels sources.

Greece’s current bailout expires at midnight on 28 February. Without agreement to extend that programme, probably until the summer, Greece’s banks will be unable to borrow normally and will depend on emergency liquidity, effectively living on an overdraft. There is up to €7bn available to Greece if it strikes a deal.

“They have to ask for an extension of the programme. If they don’t, they go belly up,” said a second policymaker. “We’re counting on their seeing their enlightened self-interest and getting the money to pay the bills.”

But another senior figure in Brussels was less optimistic: “Do we know that Germany or Finland will agree to a new programme?”

Tsipras has pledged to rewrite the terms of the bailout that dates from 2012 by trying to ease the fiscal orthodoxy defined by Berlin and achieving some form of writedown or relief on the country’s national debt of €320bn or 175% of GDP.

It is not clear how he can achieve this in the time available. Tsipras and Samaras both reject the EU terms. Samaras has been stalling since last June on the EU-IMF review of the Greek shakeup tied to the bailout.

Ironically, the eurozone is asking Tsipras, who won on a hard-left, anti-austerity rejectionist ticket, to go further than Samaras was prepared to go. Samaras and Tsipras want an end to the “humiliating” rescue programmes and their oversight by the hated troika of officials from the European commission, European Central Bank and IMF. But it is not clear how, without the creditors writing off much of the loans. This is rejected by the IMF and the ECB and is politically unacceptable to Merkel who fears it will encourage other ailing eurozone economies to shirk their sides of the bailout bargains while boosting Germany’s own growing anti-euro movement.

Besides, if freed of what it sees as the tyrannical terms of the bailout conditions, Greece is not in a position to fund itself. Its borrowing costs are currently nudging 10%, way beyond the affordable. The German government initiated parliamentary procedures last month with a view to setting up a “precautionary” fallback programme for Greece under which the country would try to fund itself on the markets, but have a eurozone cushion if that was not possible.

The German move, extremely unwelcome in Athens where the political imperative is liberation from bailouts, was seen as clumsy interference in the election. In return, the Greek outcome will now affect German domestic politics.

Tsipras’s triumph – itself a direct result of the EU’s austerity policies, although those were preceded by three decades of cronyism, nepotism and corruption which became the system in Greece – will resonate strongly beyond the Balkans, throwing up sharp questions about the policy shortcomings of the elites and their failure to get to grips with the new populist forces challenging their right to rule.

The Podemos upstarts in Spain, the Five Star anti-establishment mavericks of Beppe Grillo in Italy, and Gerry Adams’s Sinn Féin in Ireland will all relish the Syriza victory.

Other mainstream figures in the EU will also be quietly hoping that Tsipras can mount a credible challenge to the Merkel ascendancy and secure a shift in eurozone policymaking – leaders on the centre-left such as Hollande in France and the Italian prime minister, Matteo Renzi.

The result will also chasten mainstream leaders, many of them facing elections this year across the EU as they seek to neutralise their own domestic Eurosceptic and anti-establishment forces.

“Everyone knows Europe today is a continent with no growth, no inflation, high unemployment. It’s very hard to tell people that Europe is the solution, that it has the answers. What is Europe for?” asked one of the three senior figures in unusually pessimistic remarks.

“The results of the European elections [last May] have seen anti-European parties raging everywhere. That’s discontent with the European project. There is always an economic basis. The next election could be rejection of the project and there’s nothing left.”