Kevin Zeese has been invited to Venezuela to by The Intrepid News Fund as part of a delegation to observe the Presidential Elections scheduled for May 20, 2018 and to study many of the new systems and projects introduced by the government in the past year, including the Constituent Assembly and the Petro cyber-currency. The group will meet with grassroots leaders aligned with the Bolivarian Process to learn the challenges they face on the path to building 21st Century Socialism. Kevin will write about this experience for Popular Resistance and other media outlets.

While this trip will be subsidized by the news fund, Kevin needs to raise $3,000 to cover the cost of the trip. Please donate here to support this effort.

This week we urge you to take action in three areas. First, come out for antiwar actions as the Trump administration and Pentagon, with the silent acquiescence of congressional Democrats, are escalating the war in Syria. Second, we urge you to help us stop the Trans Pacific Partnership. We need to reawaken the movement of movements that stopped President Obama to now stop President Trump. We have a lot of power in an election year and every elected official should be speaking out against the TPP. Finally, Health Over Profit for Everyone, our single payer campaign, just finished its first action camp with a march and protest at Senator Sanders’ office. We urge you to join us in urging Sanders to introduce an improved Medicare for all bill in the 2019 legislative session.

All Out For Actions Against War This Weekend

As we write, the United States, with its French and British allies, are bombing Damascus. This comes after what is possibly a fake chemical attack in Syria, which Russia warned about, that is being blamed on the government.

This weekend, people across the country are planning to protest the wars at home and abroad. Actions are planned in 25 cities. This is an important time to show opposition to greater US aggression against Syria and the global great power war that these actions could provoke, including nuclear war.

The US has been threatening an illegal attack on Syria. Ajamu Baraka described this as “international gangsterism.” Russia promised to respond to an attack on Damascus; thus, a US attack will inevitably lead to escalation with veterans saying it could lead to nuclear war.

The threats are based on allegations that Syria used chemical weapons, which are in great dispute. These allegations are made by organizations like the Syrian Medical Society and White Helmets, who have been funded by USAID, an agency often involved in US regime change efforts. This chemical attack looks like an operation of the CIA and other western powers. The rhetoric calling for a rush to war comes with the UN urging a pause and as chemical weapons inspectors are just arriving in Syria.

The United States has sought to dominate Syria for generations. The CIA’s first regime change operation in Syria was in 1949 when the democratically elected president, Shukri al-Quwatli, was overthrown with CIA help. As this article documents, US efforts to control Syria have continued since that time up through the presidency of Assad’s father and under the presidencies of Barack Obama and Donald Trump.

Another urgent international crisis is the multiple days of violence and killing of nonviolent Palestinian protesters by the occupiers of Palestinian lands. Miko Peled describes Israel as a country with no legitimacy. These cold-blooded murders, which were not done because of a conflict but involved snipers shooting unarmed people, are part of a long history of resistance where Palestinians have fought the theft of their land and other injustices since the 1930s and will not give up.

On Land Day, March 30, Palestinians began a protest on the Gaza border, which will continue until May 15, the date the “Nakba”, or catastrophe, is memorialized. The Nakba was when Israel stole the land of Palestinians, declared its independence and forced hundreds of thousands of Palestinians into exile, destroying dozens of villages. Some Palestinians recently visited to their villages for the first time in 70 years. In addition to protesting these slaughters at protests this weekend, activists should escalate efforts to boycott, divest and sanction the occupiers of Palestinian land.

These are crisis issues, but there are other reasons to protest US militarism. The US is planning a long war and arms race with Russia and China. It is behind the incarceration of Lula, the former president of Brazil to prevent him from running for office. It continues to threaten Venezuela. This comes at a time when Trump has appointed a war cabinet, including war criminal John Bolton as national security adviser and Mike Pompeo as secretary of state. This is the time for those who oppose war to take action, speak out and revive the anti-war movement. 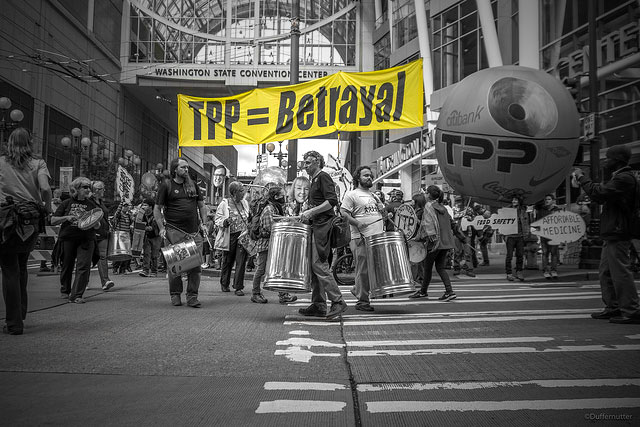 Donald Trump won the Midwest and the presidency by promising to withdraw from the TransPacific Patnership (TPP) and renegotiate NAFTA. This week, President Trump reversed course on the TPP, betraying those voters, and is now considering joining the TPP. Likewise, NAFTA negotiations under the Trump administration are for the benefit of the wealthy, not for protection of people and the planet, as Stan Sorscher documents.

Trump’s rigged corporate trade agenda can be stopped. We are urging people to take immediate action and make the hashtag #TPPBetrayal go viral. Opposition to the TPP crosses the political spectrum, so tweet to people of all political viewpoints. We provide sample tweets here.

Get the word out that we need to stop the TPP again. Let’s show all elected officials that the movement of movements that opposed the TPP has not gone away. We want trade for people and planet, not trade for big business interests at the expense of people and planet. See TradeForPeopleAndPlanet.org for more resources.

The first single payer action camp this past weekend included a march through the streets of Washington, DC. Dragging a 12-foot ball and chain, we called for lifting the burden of for-profit, insurance-based healthcare and putting in place national improved Medicare for all (NIMA).

The march, which coincided with World Health Day, began with a protest at the American Health Insurance Plans (AHIP), the lobby group for the insurance industry. Then we proceeded down Pennsylvania Avenue, stopping at the Canadian Embassy to highlight their successful single payer program, and finishing at the Department of Health and Human Services. Along with the ball and chain, protesters carried signs calling for Health Justice, Medicare for All and Health Over Profit.

On Tuesday, health advocates held a speak out in Senator Sanders’ office. While Sanders promotes single payer Medicare for all, the bill he introduced has major problems that need to be confronted. We outlined those problems in a letter to him, which was emailed to his office on April 2 and in this handout, which compares his bill to the gold standard, HR 676.

The House bill, HR 676: The Expanded and Improved Medicare for All Act, has the highest number of co-sponsors ever, 121.

While Sanders is an ally, the movement needs to hold him accountable and push him to introduce an improved bill consistent with HR 676 in the next legislative session that begins in 2019.

Please contact Senator Sanders at (202) 224-5141 and tell him to introduce a national improved Medicare for all bill in 2019 that is consistent with HR 676 and that includes these necessary amendments to his current bill:

Here is a video of the protest in Sanders office.