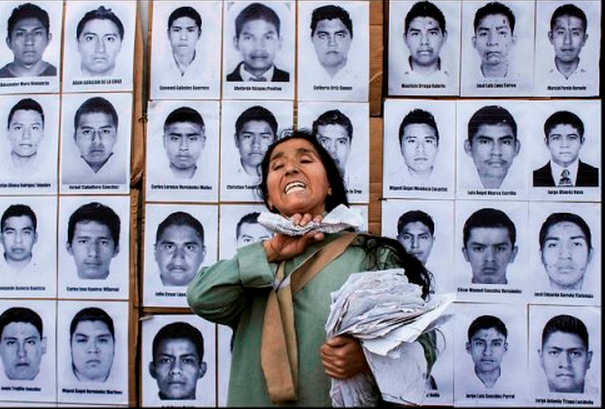 Take Action on September 26, 2015, the anniversary of last year’s horrific state crime perpetrated against the students of the Ayotzinapa teachers’ college in Mexico. On September 26 and 27, 2014, Mexican police attacked protesting students from Ayotzinapa in the state of Guerrero. The police killed six people, including three students and three bystanders. They forcibly disappeared 43 Ayotzinapa students, who remain missing.

In response to these heinous crimes, a protest movement erupted in Mexico, where hundreds of thousands took to the streets and social media (#YaMeCanse, #FueElEstado) to demand justice for the Ayotzinapa 43 and all those affected by Drug War violence.

In the U.S., protests were also held across the country and Mexican-American communities and allies continue to organize against Plan Merida and the U.S.-funded militarization that is destroying Mexico. Last month, a delegation of SOA Watch activists visited Ayotzinapa to connect with family members and students to better inform our resistance and strengthen our solidarity with Mexico.

This September 26, we ask you to join an action taking place in cities across the U.S. to remember the Ayotzinapa 43 and to demand that the U.S. stop funding the militarization that is enabling human rights violations in Mexico.

Click here for a list of actions taking place throughout the U.S. (which will continue to be updated).

If there is not an action in your area, we urge you to organize one, make signs, print our Ayotzinapa posters, and take a public space to raise awareness about the Ayotzinapa 43 and demand an end to the U.S. taxpayer-funded Drug War in Mexico!

P.S. – Events on or around the 1-year anniversary are also a great way to connect the dots around the bigger issue of U.S. militarization in Latin America, and a mobilization opportunity for our 25th Anniversary Vigil. Click here to order November Vigil palm cards to distribute on September 26! Ayotzinapa Vive, La Lucha Sigue!