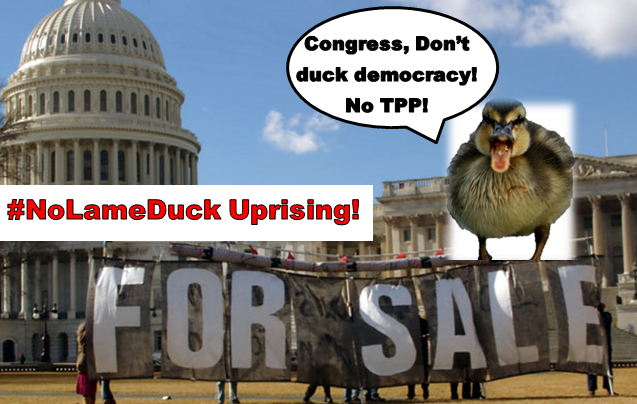 Take Action To Stop The TPP This Year

The Trans-Pacific Partnership (TPP) is an international agreement that was negotiated in secret by the Obama administration with the help of hundreds of corporate lawyers from 2009 to 2015. It was signed by the twelve member countries (Australia, Brunei,Canada, Chile, Japan, Malaysia, Mexico, New Zealand, Peru, Singapore, United States, Vietnam) on February 4, 2016. It must be ratified by the member countries within two years of signing. In the United States, ratification requires Congress to pass implementing legislation submitted by the Executive office. Once the legislation is introduced, under fast track requirements, there must be a vote within 90 days and there cannot be amendments.

The powerful movement of movements that has grown in the US kept Congress from passing fast track legislation for several years. Together, we have put the TPP solidly in the public dialogue and made it an election issue. Most of the Presidential candidates have come out against the TPP publicly. Members of Congress who voted for fast track are being challenged in their primaries by anti-TPP candidates.

Currently, Congress does not have the votes to pass TPP legislation. But, the TPP is a high priority for the Obama administration. White House staff and representatives of Big Business, such as the US Chamber of Commerce, Business Roundtable and National Association of Manufacturers, are lobbying members of Congress heavily. For now, it looks like the earliest that Congress will consider the TPP is the Lame Duck session, which starts this November. We must prevent that to stop the TPP!

Two campaigns to stop the TPP:

In mid-May, the US International Trade Commission will release its report on the economic impacts of the Trans-Pacific Partnership (TPP). This pro-“Free Trade” body generally paints a rosier economic picture for trade agreements than what occurs in reality. For example, the USITC estimated that the recent US-Korea trade agreement would increase exports by $10 to 11 billion and create 70,000 jobs. Instead, in year three of the agreement, the trade deficit with Korea grew by $11.8 billion and 75,000 jobs were lost.

We are launching a TPP Truth campaign to get the truth out about the real and devastating impacts that the TPP will have on jobs, wages, the economy, the wealth divide and more.

See the People’s Economic Impact Statement for the TPP:

Here is a two-page handout for the People’s Economic Impact Statement: The Peoples EIS TPP 2pager

Here how you can spread the TPP Truth:

And, at every event, urge people to sign up for the No Lame Duck Uprising this November to stop Congress from voting on the TPP legislation after the elections.

The White House is planning to use the Lame Duck session of Congress after the election this November to pass legislation to ratify the Trans-Pacific Partnership (TPP).

Our mission is to create the environment that makes this impossible. That’s why we are starting now to plan the #NoLameDuck Uprising! Sign up now to be part of it and we’ll stay in touch with you about what we need to do. There will be actions in Washington, DC and across the country.

The Lame Duck session takes place after the election and ends with the winter break in December. It is a time when some members of Congress have lost their seats but can still vote. The Lame Duck is often used to pass unpopular legislation. This year the Lame Duck runs from Nov 14 to 18 in DC, then members will be home for 10 days for Thanksgiving break and then they will be back in DC for the first three weeks of December, concluding on Dec. 16.

Help spread the word about the #NoLameDuck Uprising. We need thousands to join in!

(Please scan and email the sign up sheet to info@popularresistance.org or mail it to 402 E. Lake Ave. Baltimore, MD 21212)