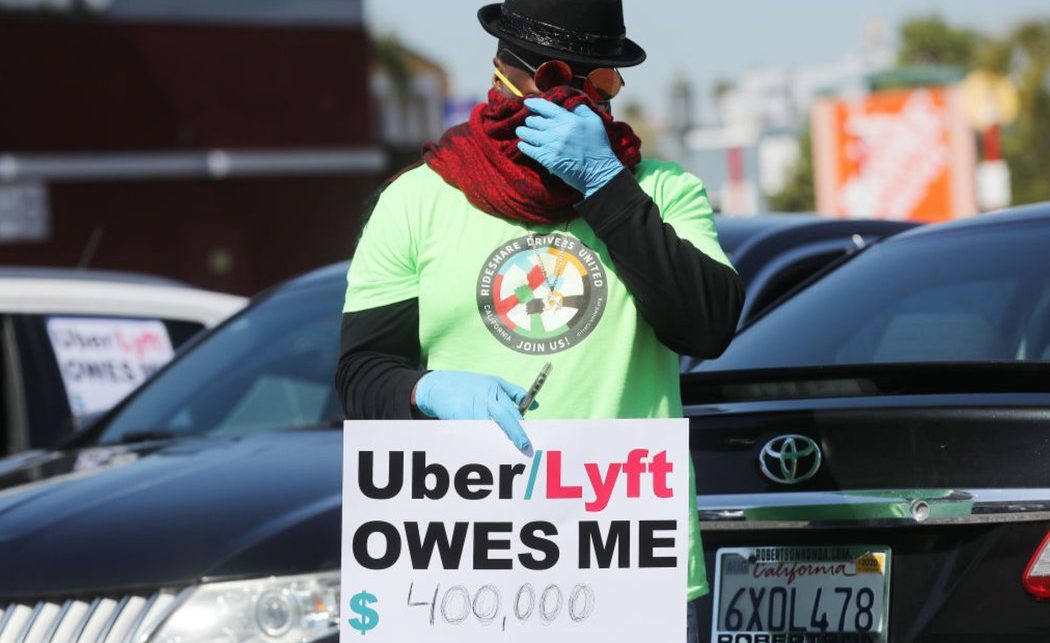 Take This Job And Love It

Worker cooperatives offer an alternative to keeping power and profits in the hands of a few rich people.

In the six years that Michael Ugwu has worked as an Uber driver in New York City, he’s seen a growing share of his earnings diverted into venture capitalists’ pockets. Uber and Lyft require workers to assume a myriad of expenses that can quickly trap drivers like Ugwu into debt and poverty.

“Currently, they’re taking out between 35 to 40 percent, when you add up all the deductions,” Ugwu says. “You end up not having enough to pay rent, maintain the car, pay the car loan, and buy gas. They’re continuously ripping us off.”

By 2017, rideshare drivers were earning less than half what they made just four years earlier, a study found. Meanwhile, executives at Lyft and Uber have raked in tens of millions of dollars in compensation.

Now some New York City drivers, including Ugwu, are becoming their own bosses by joining worker co-ops—democratic workplaces that are owned and run by their workers. It allows them to make a living wage and participate in workplace democracy.

In May 2021, Ugwu and 2,500 other drivers launched the Drivers Cooperative, a ridesharing company that lets them keep 85 percent of their fares and share in any annual profits. It has no investor shareholders or executive compensation. By comparison, Uber’s chief executive earned $64 million in 2019-2020, hundreds of times more than a typical driver’s salary of about $30,000 per year, according to an independent analysis.

By July, more than 30,000 people had installed the Drivers Cooperative’s app, Co-op Ride, which can be downloaded from the App Store or Google Play and works just like other rideshare apps. “Co-op Ride is a conscious choice that you can take,” Drivers Cooperative co-founder Ken Lewis tells The Progressive.

The Drivers Cooperative surpassed 3,500 active drivers in July, making it the largest worker co-op in the United States. But it is just one piece in a much larger movement. The National Center for Employee Ownership estimates that fourteen million people participate in employee stock ownership plans that give ownership but not management rights to workers.

A much smaller number of people, around 10,000, are employed at worker owned and run co-ops, according to Mo Manklang, policy director of the U.S. Federation of Worker Cooperatives. The majority, she says, are people of color or immigrants. These workers are emerging in new sectors like the rideshare industry, food delivery, and even video streaming. They are taking on billion-dollar firms by raising capital from the communities they serve.

“The Drivers Cooperative means everything to me now, because I see it as my own business,” Ugwu says. “I will do anything that I possibly can to see that we succeed.”

A2021 report found that, on average, chief executives made 351 times as much as a typical worker in 2020. The Drivers Cooperative’s pay ratio between highest and lower-paid workers is less than two to one, which is the same rate as many other worker cooperatives. Manklang says there are as many as 900 worker co-ops in the United States.

Manklang agrees: “The explosion in interest for both drivers and users of the Drivers Cooperative is a clear example of how economies look toward cooperatives in times of crisis to weather the storm and build a stronger, more equitable economy than before.”

Despite its impressive growth, the Drivers Cooperative still lags behind competitors like Uber and Lyft, which combined had almost 86,000 active drivers in New York City in May. Its goal is to have 5,000 drivers, a milestone that Lewis believes will help reduce wait times for both drivers and passengers.

Because they can’t raise billions of dollars by offering ownership and control to investors, worker co-ops have had to find other ways to raise capital. The Drivers Cooperative, Lewis says, obtained $200,000 from Shared Capital Cooperative’s revolving loan fund, which specializes in providing loans to cooperatives. The Lower East Side People’s Federal Credit Union loaned the co-op $40,000 and refinanced its members’ predatory car loans.

In August, the Drivers Cooperative surpassed its $1.07 million fundraising goal on the crowdfunding platform Wefunder and raised its target to $2.5 million. Instead of an ownership stake, investors are offered 2.5 percent of revenue until they receive two and a half times their investment.

“Investors, including many riders and drivers, see the virtue of this cause,” Lewis says.

After driving for Lyft for three years, Keith Hurdle received a customer complaint alleging he had gotten into an accident. This caused his account to be closed for two weeks, even though he says he provided photographic evidence to the contrary.

“They were just very lackadaisical about turning me back on,” Hurdle says. “Very, very unprofessional.” He ended up joining the co-op, which helped him refinance his car loan and drastically reduce his monthly payment.

“It was a blessing to get that break,” says Hurdle, who has been able to save money and plan for the future for the first time. “I flew to Nigeria and got married.”

The economic impacts of the pandemic hit gig workers hard. Some drivers for Lyft and Uber had to wait for months for unemployment checks because rideshare companies avoid paying into unemployment insurance by classifying their drivers as independent contractors.

“I know rideshare drivers who died and their families could not afford to bury them,” says Lewis, who was first exposed to cooperatives in his native Grenada during the country’s socialist revolution of 1979-1983. He acknowledges that the co-op also classifies its drivers as contractors to remain competitive, while saying it supports stronger industry-wide standards for this category of workers.

Rideshare drivers and organizers say there’s been an increased interest in worker-ownership in California after the rideshare industry spent $220 million there to pass Proposition (“Prop”) 22 in November 2020, which gutted labor protections for workers in the gig economy. The Drivers Cooperative expressed solidarity with the thousands of California rideshare drivers who went on strike on July 21 to demand a living wage, sick leave, and the right to unionize.

“[Uber and Lyft] seek to legalize their exploitative model by relegating drivers to permanent second-class status as workers,” the Drivers Cooperative said in a statement. Uber and Lyft have sought the passage of similar measures in other states, and have vowed to appeal a judge’s ruling that struck down Prop 22 in August.

“Co-ops can raise the ceiling” for workers, says veteran labor organizer and Drivers Cooperative co-founder Erik Forman. “Because they’re only controlled by workers, they can create the best possible workplace that can exist within a given sector.”

Cooperatives are also emerging in food delivery, which experienced explosive earnings during the pandemic that weren’t shared by workers or restaurants.

Holly Yessin, a recent college graduate in Lexington, Kentucky, wanted a part-time job that provided good pay, flexibility, and safety during the pandemic. She started delivering food with DoorDash but struggled to break even after deducting expenses. “You don’t get paid an hourly rate, you just get paid based on the tips, and how many orders that you do,” she tells The Progressive.

DoorDash claims its drivers earn $18.54 an hour, but after expenses, Yessin says, her take-home pay was closer to the $1.45 an hour that a 2020 study found to be the average DoorDash driver’s net pay. The $414 million awarded to its chief executive officer made him the nation’s second highest paid executive in 2020.

Yessin quit DoorDash to join Delivery Co-op, launched in September 2020 in Lexington, as one of a growing number of local food delivery co-ops springing up across the country. Restaurants normally operate on thin margins, but apps can charge 30 percent or more of their sales.

“During the pandemic, a lot of the local restaurants here were actually losing money to companies like DoorDash and Grubhub because it actually was costing them more to participate than they were making through those services,” says Yessin, who is now serving as a delivery manager in addition to driving.

Delivery Co-op is cooperatively owned and controlled by eight member-restaurants that all receive a share of profits. Instead of paying for each delivery, 400 customers pay a $25-a-month subscription fee for unlimited deliveries. “100 percent of the food sales go directly to the restaurant,” says co-founder and director Aaron Withers.

VisitLex, the local convention and visitors bureau, contributed $10,000 in startup costs in exchange for advertising, and Withers says the co-op has been “cash flowing since day one.” The co-op’s seven delivery drivers receive a base pay rate of $10 an hour and keep all tips, averaging $20 an hour.

Drivers qualify for benefits after six months and can become worker-owners who get a share of the co-op’s profits after one year of employment.

“Instead of just working for the company, I’ll actually be able to participate from an ownership side,” Yessin says. She’s excited to work for an organization whose business model isn’t based on exploiting labor.

“We’re not taking so much money from local restaurants, we’re helping them to be able to make more money,” she says. “I’m working for a company that’s able to pay a living wage.”

Not all co-ops are created equal. Sam Sacks recalls working at a co-op in Tallahassee, Florida, in 2007, which was owned in part by members who purchased a share of the business. When workers launched a union drive, management successfully squelched the effort. “It kind of goes to show that a place can be a co-op in name only,” Sacks says.

“It’s completely different,” Sacks says. “I actually have a say in the direction of the co-op.”

A recent study found that traditional media outlets tend to ignore the plight of working people and the poor, especially in business reporting. Means TV’s democratic structure and funding model allow the platform to do the opposite. Sacks produced several segments on the more than 1,000 Alabama coal miners on strike for better pay and working conditions against Warrior Met Coal, a story ignored by the largest three corporate cable news outlets.

Means TV was co-founded by Naomi Burton and Nick Hayes after they quit jobs in advertising for Detroit automakers to help give a voice to the working-class struggle. “Most media created today amounts to a sort of cultural gaslighting,” Hayes says. “The only kind of cultural reflection we see on TV is the well-to-do living in the big city making plenty of money.”

“Right now, many of us young people feel so powerless,” says Burton, citing the COVID-19 pandemic and runaway student debt. “It is nice to have a project that feels like it is empowering, and provides a path out of this kind of hellscape that we’re in,” adds Hayes. “We really wanted to build a business with the input of others, and collaborate with people on core aspects of the business.”

Hayes says co-ops can help make the economy more participatory and better able to “push for positive change,” in the workplace and in society. “The more co-ops there are, the more that we can work together to force U.S. policy changes and things like that on a national scale.”