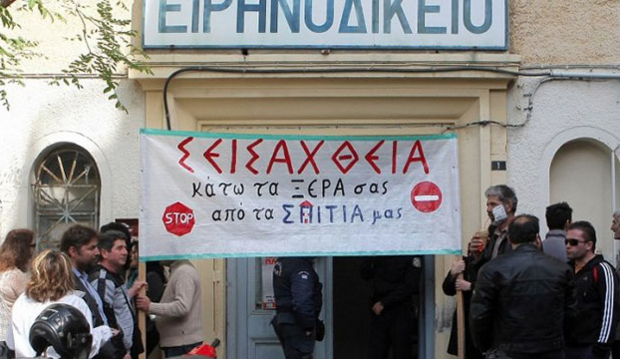 Once again, Greece is in the throes of domestic unrest. Despite the fact that global solidarity movements and the mainstream media have seemingly forgotten about Greece following last July’s referendum, in recent weeks, Greeks have been taking action. Farmers have set up roadblocks in hundreds of locations throughout Greece and have descended upon the capital; lawyers are on strike; accountants have declared that they will abstain from filing tax returns for their clients; and ordinary citizens have once again filled the streets in protest of the Syriza government’s proposed pension cuts, recapitalization of the banks and tax increases.

The Popular Stoppage of Payments movement, which was founded in Crete in 2013, has inspired similar social movements throughout Greece since its inception. Each week, members of the movement block local courthouses, preventing the auctions of foreclosed homes from taking place and saving these homes for their owners in the process. Mona Amanatidou and Christos Triarchis, activists within the Popular Stoppage of Payments movement, talk about the movement, its actions and what has been transpiring recently in Greece.

Michael Nevradakis: Tell us how the Popular Stoppage of Payments movement first began, and share with us a brief historical overview of your movement.

Mona Amanatidou: I have to tell everybody that it was March of 2013 when citizens of Iraklio gathered in the main square of the city, because of the economic crisis and the poverty it brought to everybody here in Greece. The reason was to find solutions, so there were many gatherings, and in one of them, there was a suggestion made about being present at the county court to prevent the banks from seizing our properties. That’s how our movement started in April 2013.

Ever since, we have managed to rescue about 800 homes of people from the middle and lower class, [who are] now able to house their families in them. That’s why we are very determined to go on doing the same actions.

I don’t know if everybody knows what’s going on in Greece with the memorandums that the previous and present governments implemented. Most of the people are poor nowadays, and they live on charity. Most of the people owe money to the banks and to the state itself because they are unemployed, so it is impossible for everybody to pay back what they owe to the country or the banks. It is impossible for most of them to survive — they starve, in fact.

One of our actions is to be present at the county court every Wednesday from 3:30 pm to 5 pm and counter all the banks and the “vultures” who want to seize our homes. This is very important for the Greek people.

What actually takes place at the courts every week?

Amanatidou: The banks hold auctions after they confiscate our houses. They go on with the auctioning of these houses at very low prices. We prevent these auctions from taking place. We don’t allow anybody to come into the courtroom and give an offer, so the auctions are invalidated.

In the coming months in Greece, the wave of home foreclosures and auctions is set to increase following new laws that were passed by the Syriza-led government. Is the Popular Stoppage of Payments movement ready to take on this new challenge and to support the growing number of Greek households who will be in danger of losing their homes?

Amanatidou: We have heard about the new policy the government is going to bring in Greece, and we are determined to take any measures needed to stop these auctions in any way. We believe that the system is not ready, in fact, to go on with the new way they intend to take our homes. Meanwhile, we are getting ready and we are determined to go on fighting this situation.

Has the Popular Stoppage of Payments movement encountered any legal difficulties or any problems with the police as a result of its weekly actions in the courthouses?

On what other issues is the Popular Stoppage of Payments movement active, beyond the issue of home auctions and foreclosures?

Amanatidou: Generally, we fight against anybody — even the state itself — from taking our property. We know that when an industry closes, unemployment then rises, and what we care about is for people to have a job, to work. That’s our final demand. We want the government itself to ban auctions and confiscations until we have real, productive development in our country, work for everybody and wages which will provide a decent life to everybody. That way, we will be able to pay back what we owe, either to the banks or to the state itself. You see, when you don’t have money, you can’t pay taxes. When you don’t have work, you don’t have money. That’s the problem.

Which social movements and organizations are participating as part of the Popular Stoppage of Payments movement?

Amanatidou: Recently, we’ve organized a movement [on the island of Crete] in which different movements, from agricultural to environmental, are taking part. We are [soon] having a meeting at Rethymno, another town in Crete, to make decisions on further activities we are going to organize. Of course, we support everybody’s reaction on the agricultural matter [the strikes and roadblocks organized by farmers nationwide], and also the insurance funds.

We have a problem here in Greece with insurance funds. We have no money, [the government] wants to cut our pensions — they want us to pay more taxes, more money for the insurance funds, and in fact we have no money to do that. So we are to demonstrate against it and fight against the law. All the movements support these demonstrations, and we try to be united and become one movement against the government policy.

Is there any support from any political parties for the actions undertaken by your movement?

Amanatidou: Yes, there is support, but not officially. Individual members of these political parties take part and support us. These parties are not represented in [Greek] Parliament. They are EPAM [the United Popular Front], LAE [Popular Unity], Antarsya [Front of the Greek Anti-Capitalist Left] and others. The main aim is for the people to be united against the memoranda and generally the European policies that lead people to poverty and starvation.

How do you view the protests that have been launched by the farmers, and what is your message toward these farmers who are protesting and who have set up roadblocks all over the country?

Amanatidou: It’s not only the farmers. Everybody has the same problem here in Greece, and this is taxes, this is insurance and generally the kind of life we lead nowadays. We support the farmers, the lawyers, the doctors, everybody [who is protesting], and the problem and the target is one: to make the government change everything and to make them stop paying the illegal debt, as we know. The government has to take care of the people first and their survival, and then the banks themselves.

Have the mass media — either in Greece or internationally — provided any coverage of the Popular Stoppage of Payments movement and your actions, or have you been ignored by the mainstream media?

Amanatidou: The media used to provide support, more than one year ago, but after Syriza came to power, they ignored us. There are some media, especially in the provinces, which support us. Some newspapers, some blogs — and all of them are in our country, not outside in Europe or the rest of the world. This is something we need, because people all over the world must be informed about what is going on here in our country and what we suffer, how we live. Our everyday life is a struggle, a real struggle.

How can an ordinary citizen participate in the actions of the Popular Stoppage of Payments movement?

Amanatidou: It’s very simple. Everybody who realizes what is going on — everybody who realizes that they will be one day soon unable to house their family, without a job, without the means to have a decent life — can come and join us. We need nothing; we don’t care what about political ideas. The main idea here is to be united and find a solution to have a decent life. That’s it.

You mentioned possible future actions of the Popular Stoppage of Payments movement. What are some actions that your movement is now planning?

Triarchis: We have taken part in actions regarding huge projects of wind turbines here in Crete [which were opposed by many on the island on the grounds of their local economic and environmental impact]. A few months ago, along with other people from other prefectures of the same island, we blocked those plans and those projects and so-called “investments” on this island. That was a very good and successful action, and we intend to do the same in the future — as soon as they dare to come back to the island again.

Do you believe that the current Syriza-led government has staying power — that it will remain in office for much longer considering everything that is happening now in the country?

Triarchis: I’m going to drive you a little bit backwards, to the end of the Greek revolution against the Turks and the birth of the so-called “new Greek state” back in the 1800s. Unfortunately, we have now come to realize that our country has always been a protectorate — an undercover protectorate — and nowadays, especially the last few years, we have openly become a colony: a colony of debt. The so-called government — we are talking about current and previous so-called governments — have signed memoranda which do not allow any official and major decision regarding the country unless they have the permission of Brussels and Berlin. I’m sorry for being bold, but that’s the truth, that’s the real truth.

Coming back to your question, it doesn’t really matter who is going to come to office after the next elections, whenever those elections will take place. Now, Syriza is following the plan of the European Union and the lenders and the IMF [International Monetary Fund]. They are doing nothing more than that. They are going to do the same, whoever is going to be the next government or the next combination of political parties to form a so-called government.

In closing, what is your message to the Greek government, the European Union, the troika and Greek society?

Amanatidou: What we have to do is to push the government to change everything [about] the political system, which they claim is a democracy, but we are sure it is not a democracy. We must alert them to set up a democracy here in Greece, and at the same time, change everything having to do with the economy and the debt, the debt, which is illegal.

At the same time, we have to return to our own national currency. In this way, we will be able to provide every class with money, with investments, so that employment is going to rise, everybody could have a job, get money, and sooner or later, Greece will be productive and wealthy, and consequently, all the people will have a very nice life here.

This is a very beautiful country … the climate is so nice, so exceptional, that we can produce food and we can produce everything we need to live happily ever after. Not only for the Greeks, for everybody who comes here and lives here and loves this country.