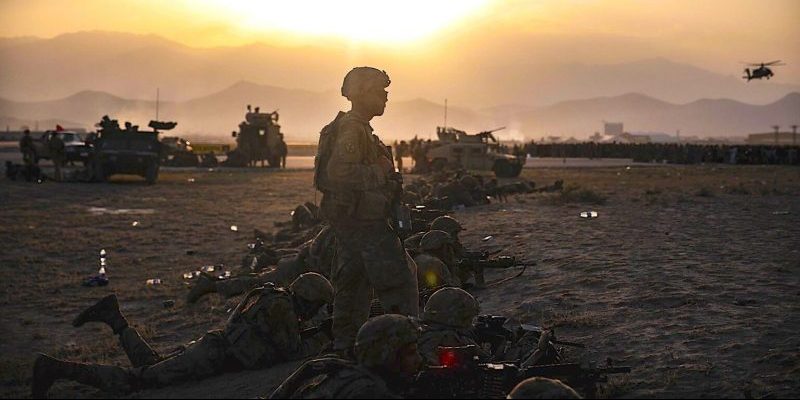 Above Photo: U.S. soldiers guard the tarmac at the Hamid Karzai International Airport in Kabul, with crowds in the background, Aug. 15. U.S. Marine Corps, Isaiah Campbell.

The quick collapse of the Afghan government after the withdrawal of U.S. troops has scared the despots.

The U.S. withdrawal from Afghanistan is being treated with great alarm in Arab capitals in the Gulf.

The United Arab Emirates and Saudi Arabia are instigating their media (which dominates Arab discourse) to portray as horrors the U.S. defeat and resumption of Taliban rule. Ironically, when the Taliban first came to power in 1996 they obtained recognition from just three regimes in the world: Pakistan, Saudi Arabia and the UAE.

The rise of the Taliban could not have been possible without direct Saudi and UAE (and Qatari) military and financial investment. Then head of Saudi intelligence (who mysteriously left his post only days before Sep. 11), Prince Turki, was one of the few foreign leaders who actually met Mullah Omar and negotiated with him. Saudi religious textbooks were widely used among Afghan refugees (Taliban means “students” in Pashto).

Saudi books were also used in ISIS schools but these textbooks have been undergoing changes at the urging of Zionist organizations in the U.S. to drop references bothersome to Israel, such as anti-Semitic remarks, though no similar effort is being made to remove anti-Shiite and anti-Christian references.

So why would Arab despots in the Gulf be alarmed about the rise of the Taliban when they were the midwives for the Taliban’s rise in the 1990s in the first place? The U.S. withdrawal raises alarm in the Gulf because to them it signals a retreat by the U.S. from the affairs of the region.

American disenchantment with the Middle East worries Gulf leaders, who fear being targeted by Iran in the absence of U.S. military protection in the region. Of course, the U.S. still has a heavy military presence in the region, especially in Gulf countries. Furthermore, it is absurd to speak about a U.S. retreat when U.S. troops are present in over 150 countries in the world, and in 800 bases, and when over 200,000 U.S. troops are deployed overseas.

But Gulf despots have been nervous ever since the Obama administration withdrew from Iraq (unwillingly of course) and the U.S. signed the nuclear agreement with Iran in 2015. It was in this context that the twin tyrannical regimes of Saudi Arabia and the UAE decided to solidify their alliance with Israel. (The relationship between Israel and Gulf countries goes back many years, to the war in Yemen in the 1960s, which brought the two sides together).

The U.S. withdrawal was met with great consternation in Washington DC as well: the media elite is now as invested in the permanent wars as the top military brass—probably more so because the journalists don’t have to do the fighting or the dying. America’s withdrawal from Afghanistan and the flight of loyal U.S. client, Ashraf Ghani, and the top corrupt elite, was another reminder to Gulf despots that the U.S. would not hesitate to leave its clients behind if its interests dictated.

Ever since the Shah of Iran was ousted from power in 1979, Gulf regimes have been consolidating their military alliance with the U.S. and increasing their appetite for exorbitant arms purchases. But those regimes are aware that they can’t fight and win wars on their own. The “storm of resoluteness” (the official Saudi name for the savage war on Yemen) exposed the incompetence and weakness of the Saudi armed forces, despite Western assistance and involvement.

Gulf despots are likely to increase their reliance on Israel as a chief regional backer, enforcer and provider of spy technology, according to recent revelations. It is not far fetched to expect Gulf countries to request (in return for generous financial contributions), Israeli military deployment on their own territories. Israel, given its extensive occupation and agenda of aggression, probably can’t afford to lend too many soldiers. But military advisors will be stationed in Gulf countries—if they are not stationed already. Previously, cooperation between Gulf governments and Israel centered on intelligence. The next phase will be more military.

What Gulf regimes hope from U.S. occupations in the Middle East is that the U.S. keeps its troops in the region indefinitely. Gulf regimes (along with Israel) have invested in the promotion of Iranian threats, as well as sectarian agitation between Sunnis and Shiites throughout the Muslim world. One reason is to undermine the credentials of various groups fighting Israeli occupation.

Resistance movements in Lebanon and Gaza against Israel have earned both Hamas and Hizbullah accolades from the Arab population, but the Gulf anti-Shiite campaign has succeeded in demonizing—to a degree—allies of Iran in the region. Yet, Arab public opinion surveys still indicate that Israel remains the biggest threat to the Arab people, notwithstanding Arab regimes’ efforts to make Iran—not Israel—the chief and only enemy of the Arabs. U.S. military presence in the Middle East has boosted the confidence of Gulf regimes, especially in the wake of their failed military efforts: by Saudi Arabia in Yemen and Syria, and the UAE in Libya and Yemen.

Furthermore, Gulf regimes want assurances that the U.S. would not abandon its clients and lackeys in the region. Regimes that the U.S. has established in the region, whether in Iraq or Afghanistan after U.S. occupations, are utterly corrupt with scant connection to democracy. They are a version of the corrupt systems of the Gulf.

The quick collapse of the Afghan government after the U.S. withdrawal has had to scare Gulf despots. Here, after all, was a civilian government touted as a civic and civil alternative to the Taliban and yet it seemed to have a smaller popular base than the Taliban itself.

The U.S. has no history of supporting good governance or democracy in the region. If anything, corrupt and undemocratic rule is the favorite form of rule for U.S. because it facilitates its dominance and furthers its economic interests. A democratic Saudi Arabia or UAE would not be spending billions on arms purchases and would not be normalizing relations with Israel. They certainly would not be producing and pricing oil according to the wishes of the U.S. president.

It is not that the Gulf regimes are tottering or that they are facing internal armed opposition, though the threat to Bahrain’s rulers in 2011 was very real and the regime would have collapsed if not for the military intervention (with U.S. support) of the Saudi regime.

It is likely the U.S. will grant the Israeli-Gulf alliance plenty of latitude to commit aggression and perpetrate assassinations throughout the region. After all, those regimes adhere to the U.S. definition of terrorism. But the Gulf governments will suffer decreasing legitimacy as they will share the blame for unending Israeli aggression in the region.

It won’t be easy for Gulf despots to continue to claim that they represent Arabism vis-à-vis a Persian state while they partake in joint military and intelligence adventures with Israel. Only when those adventures harm other U.S. allies (like the siege of Qatar) will the U.S. intervene to restrain its clients.

The U.S. will continue to defend and support those Gulf tyrants. It is not surprising how many statements of support for the Saudi regime have been made by Biden administration officials — after Biden himself referred to the Saudi regime as a “pariah” when he was running for president.

But when the moment comes that despots are overwhelmingly rejected by their people, neither the U.S. nor Israel can save them. Husni Mubarak realized that when it was too late.