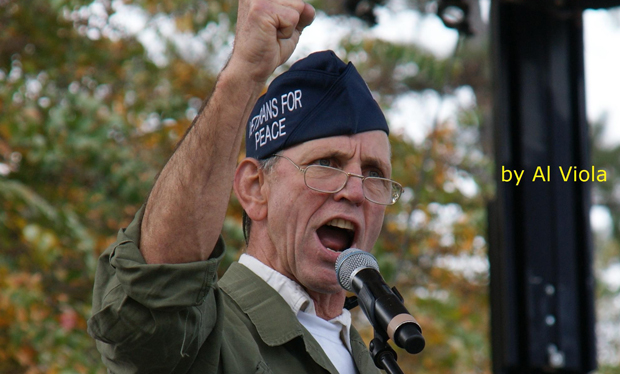 Talk With the Vets For Peace Hunger Strikers

Invite Elliott Adams and Tarak Kauff to speak with you via Skype.

Former VFP president Elliott Adams is now in Day 54 of his indefinite fast in solidarity with the hunger striking prisoners at the U.S. prison at Guantanamo Bay, Cuba (as of Monday, July 8).  VFP Board member Tarak Kauff is in Day 32.  According to CloseGitmo.net, the Guantanamo prisoners are now on Day 153.

One hundred and six prisoners are participating in the hunger strike. Forty-five are being force fed.  Two are in the hospital.  They are fasting for their lives, for their dignity, for their freedom.  They are refusing to eat so that people will know of their desperation at being indefinitely detained, without charge, without trial, many of them for 11 years.  Eighty-six of them have actually been cleared for release by all relevant U.S. agencies.  Yet they continue the torture of indefinitely being separated from their families and loved ones.

Elliott and Tarak are taking in up to 300 calories a day, and taking in supplements and vitamins to keep their electrolytes balanced, their kidneys functioning, etc.  They are not being tortured with feeding tubes being forced down their noses into their stomachs.  They are not being systematically sleep deprived by guards banging steel doors shut hundreds of times a night, as a Guantanamo guard recently reported. But they are making a big sacrifice, and yes, they are putting their own health at risk, both short term and long term.

Is this solidarity hunger strike rather extreme?  Yes, it is.  But Elliott and Tarak, like Diane Willson and Brian Wilson who also fasted to shut down Guantanamo, were sickened when they learned of the desperate plight and severe mistreatment of the men who are being held by the U.S. military at Guantanamo.

“I just can’t sit and enjoy my life when my country is doing such terrible things to these people,” said Elliott Adams.  “I am fasting in order to motivate others to take action. I am fasting to help build a movement that will actually succeed in shutting down Guantanamo and releasing innocent prisoners.”

Shaker Aamer, a Guantanamo prisoner and a British citizen, recently said “The administration is getting ever more angry and doing everything they can to break our hunger strike. Honestly, I wish I was dead.”

“Of course under these unbearable circumstances they would rather be dead,” said Tarak Kauff.  “So would I, so would you.  These men are human beings with families, who once had lives, hopes and dreams. Many of them were simply turned over to U.S. forces for a bounty. Now they are suffering unimaginable tortures while the corporate media and the public remain for the most part either unforgivably ignorant or coldly indifferent.  Please, do not remain silent.”

Elliott Adams and Tarak Kauff would like to talk directly to you via the magic of Skype video, or even via a speaker phone.

Or you can make arrangements through Gerry Condon, 206-499-1220,
projectsafehaven@hotmail.com.

For more information on the effort to close down Guantanamo, visit CloseGitmo.net and WitnessTorture.org.